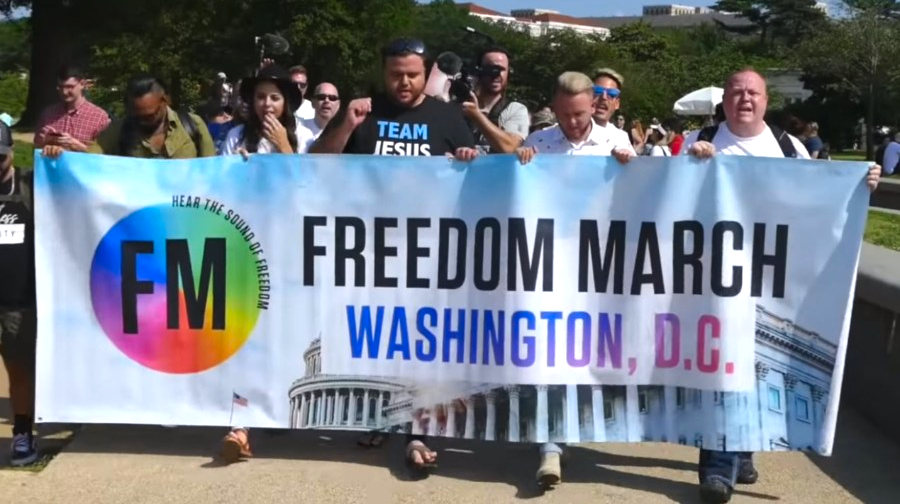 “The Lion of the tribe of Judah is roaring, He’s roaring, to set the captives free,” sang a group of ex-LGBT people. They marched around the Washington Monument and toward the Ellipse in front of the White House and back on Saturday, May 25. The banner they carried read: “Freedom March Washington D.C.,” and “Hear the sound of freedom.”

This Saturday marked the second annual Freedom March in Washington. This year saw a significant growth in numbers. LifeSite News reported there were about 200 participants this year, a threefold increase from last year’s inaugural march.

Stories That Need to be Heard

“The whole reason why I started the freedom march was because I felt like all these stories of people that have left LGBTQ lifestyles needed to be heard,” Jeffrey McCall, Freedom March organizer said in an interview with CBN News.

McCall has his own story of freedom from the LGBT lifestyle. He lived a homosexual lifestyle since age 15. In his early twenties, he began living as a transgender woman named Scarlet and prostituting himself. He says at this point he hit rock bottom and was secretly watching sermons by pastor Jentezen Franklin. You can read more of his story here.

I had an encounter with God, and I left everything to follow Him in 2016. He has been everything I ever wanted and more.

“I had an encounter with God, and I left everything to follow Him in 2016,” McCall said. “He has been everything I ever wanted and more. And He’s been amazing and kind and good and full of mercy to me. So I will always always share about what Jesus has done to set me free from a false identity, and show me that I am a son of God through Jesus.”

McCall said the impact of the Freedom March has been to build “a close-knit family of overcomers.” It’s also “brought light to this topic.” The personal stories of people who previously lived the LGBT lifestyle show it’s possible to find freedom in Christ.

McCall spoke at a rally before the march along with more than a dozen other people who have come out of an LGBT lifestyle. Two survivors of the 2016 Orlando shooting at Pulse, a gay nightclub, shared how they came to God and overcome temptation.

Angel Colon said he cried out to God while he was laying on the ground at Pulse nightclub, shot multiple times. Unable to move from the ground, he declared that he would survive and would worship God for the rest of his life. “That process was not easy at all, but look today, all these overcomers here.”

Colon said that together the Freedom March are telling the nation that “change is possible in Christ.”

“Temptation comes and goes in our lives. But when it stands in our face, we can look at it in the eye and tell it, ‘I don’t want you, I want Jesus.’ That’s how you know you are free.”

Colon said he didn’t get to chose the sin he would struggle with, but he gets to chose how he responds. “We were all born into sin, baby, but John [3:3] says we have to be born again.”

Brian Wheelock, a man who formerly lived a homosexual lifestyle, said the fact that he was speaking at this event “is the first miracle.”

“Never in a million years would I have thought I’d be speaking at something like this, especially if you were to go back, you know, until I was about 24, 25,” Wheelock said. “I was living the gay lifestyle myself. And you know what, I would have been standing over there,” he said, pointing off the stage, “having an argument with somebody that this is the way I was born, and that there’s nobody gonna change that, because this is who I am.”

Wheelock said he lived the homosexual life for at least ten years: “Those feelings were real.”

Wheelock embraced his same-sex attraction. “I thought I was free,” he said. But the more he immersed himself in that life, the more he felt empty. “As time went on, I just felt more and more depressed in that life, and I just felt God was telling me, ‘Brian, this is not my best for you. Brian, I have better for you.'”

From the stage, Wheelock told the story of how he actively fought against same-sex attraction and began to focus on the person he was supposed to be.

“I didn’t pray in the name of Jesus, that he would make me straight. I prayed I would die to myself and I would become a follower of Jesus Christ. And God is faithful to that.”

Then Wheelock introduced his family. Three girls — ages 11, 9 and 6 — ran on stage to meet their dad. Following close behind came his wife, Pam. Wheelock said God had given him a vision of his wife and three or four children when he was still actively homosexual. He had written the vision down, but dismissed it as unrealistic. Yet, here they were: the family he had seen.

“This is God’s grace,” Wheelock said.

Wheelock and his wife speak publicly and often counsel couples on the secrets to a happy marriage.

Regarding the Claim That This is About ‘Conversion Therapy’

Wheelock said he had to research conversion therapy because people were accusing him of promoting it. Conversion therapy had nothing to do with his freedom from the homosexual life, nor does he promote it, he told a Life Site News reporter. He added that a couple of times parents have asked him to speak with gay teens, and he found out the teens were totally uninterested in changing. He told the parents he was not going to force their child to meet with him or change. Conversion therapy, he says, tries to force people to change.

The message of his life, Wheelock says, is: “changed by love.”

“It wasn’t all that stuff that convinced me. It was feeling the presence and the love of God that showed me He had a different path for me.”

“I thought I was doing everything I wanted as I pursued that life and I was free. What I found out is that I was really tying myself up into bondage,” he said. “This is freedom now.”

Freedom, he says, is “feeling the love of God and being free to be who God made me to be, and who I feel comfortable being now.”

Aliya Kuykendall is a Staff Writer for The Stream. You can follow Aliya on Twitter @AliyaKuykendall and The Stream at @Streamdotorg.