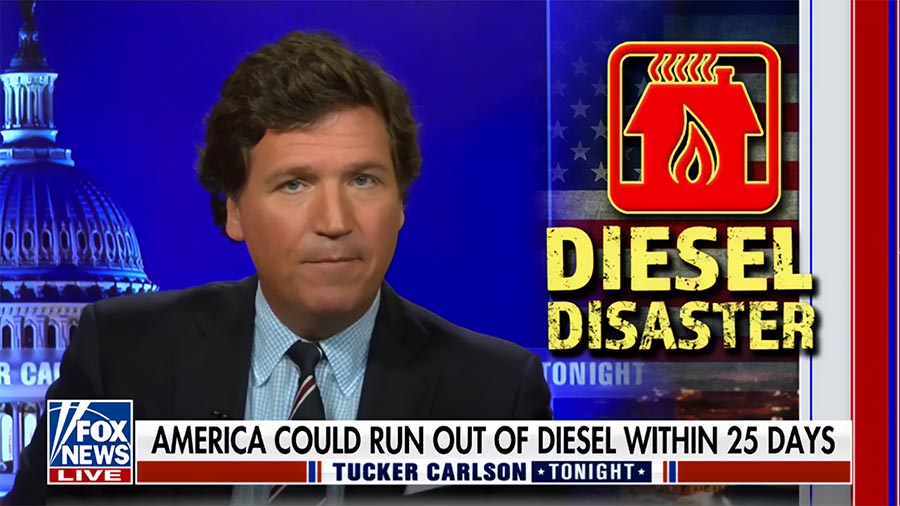 “Thanks to the Biden administration’s religious war in Ukraine, this country is about to run out of diesel fuel. According to data from the Energy Information Administration, by the Monday of Thanksgiving week, that’s 25 days from now, there will be no more diesel. So, what’s gonna happen then? Everything will stop,” Carlson said.

“That means trucks and trains and barges all unable to move. Farm equipment will shut down. There will be no deliveries, as there will be no trucks. There will be no diesel generators, and then, inevitably, our economy will crash because everything runs on diesel fuel. Not on solar panels, not on wind farms, but diesel fuel. Diesel is not a negotiable commodity. You have to have diesel,” Carlson added.

National Economic Council Director Brian Deese warned “emergency measures” might be necessary to address the shortage of diesel on Oct. 19, saying that all options, including a ban on fuel exports to Europe, were being considered. Exxon Mobil CEO Darren Woods and industry groups warned that an export ban could backfire and send prices even higher by worsening supply issues.

National stocks of distillate fuel oil, which is utilized in the production of diesel and other fuels, has dropped to levels not seen since 2008.

Carlson said that economic sanctions on Russia had done more to push the United States than Russian President Vladimir Putin, and questioned why American policymakers would risk wrecking the American economy before turning to statements by Democratic Rep. Jamie Raskin of Maryland.

Raskin lambasted Russia as “a world center of antifeminist, antigay, anti-trans hatred, as well as the homeland of replacement theory for export” in a Tuesday statement.

Carlson also described the Biden administration as “children” who not only couldn’t “admit what they’ve done wrong,” but were incapable of comprehending their mistake.

“The truth is these people are bumping right smack up against reality. Here is the reality: We have 25 days to avert economic catastrophe,” Carlson said. “Catastrophe is what will happen if we run out of diesel fuel. That’s more important than prosecuting a jihad in Ukraine. It’s more important than World War Trans. Everything depends on this. We’ve got 25 days to fix it.”