Although the hysteria about the shooting of Harambe suggests otherwise 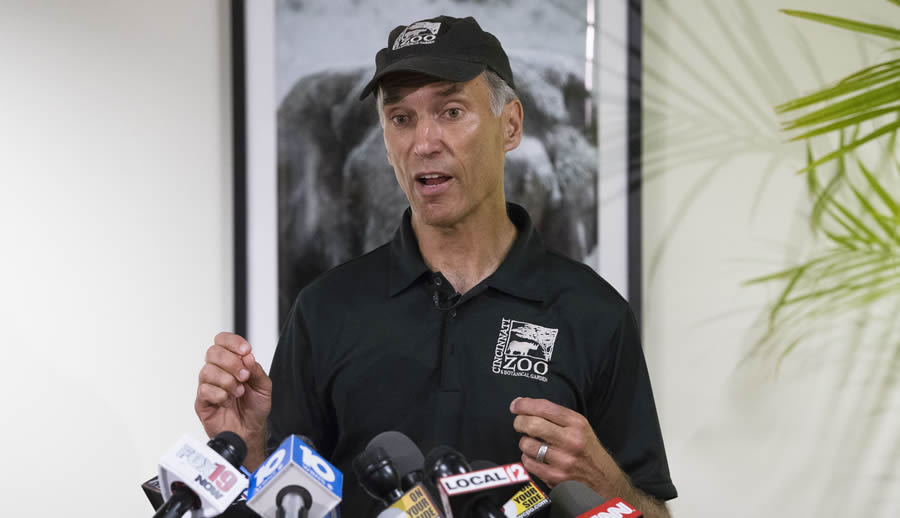 Thane Maynard, director of the Cincinnati Zoo & Botanical Garden, speaks during a news conference, Monday, May 30, 2016, in Cincinnati. A gorilla named Harambe was killed by a special zoo response team on Saturday after a 4-year-old boy slipped into an exhibit and it was concluded his life was in danger.

A gorilla named Harambe has been shot at the Cincinnati zoo to prevent harm to a toddler who fell into its enclosure. A Huffington Post headline reads, “RIP: Captive gorilla shot.” Rest in peace? It was the gorilla that died, and animals, so far as we know, don’t need that kind of obituary.

It could have been the four-year-old boy instead of the gorilla — in which case an RIP headline would make sense, because the child is a human being with, according to one mainstream belief system, an immortal soul which, all going well, is destined for heavenly rest. Then again, given his innocence, such pious wishes may be superfluous even for him.

I digress. The point is this: why is there more lamentation on the internet for a gorilla than for the 700 refugees who drowned earlier this week in the Mediterranean? Where are the vigils? Where are the stuffed toys? Where are the flowers? Why have 277,000 people (so far) signed a Justice For Harambe petition which demands that the parents of the child be charged with negligence?

There are people who think Harambe should have been given the benefit of the doubt — at least the few minutes, or even seconds, that it would take for a tranquiliser dart to work. But a few seconds more of intimate contact with the 400-pound Harambe might have been fatal for the little boy, who was already being dragged around the enclosure moat with his head banging against its concrete sides.

This is an animal which can crush a coconut with one hand. It could kill a toddler, even inadvertently, in a heartbeat. No doubt the zoo staff was thinking of the time a two-year-old fell into an enclosure in the Pittsburgh zoo in 2012 and was torn to pieces in a flash by African wild dogs.

Shooting Harambe was unfortunate, but the right thing to do if we value the lives of children more than the lives of animals.

It was an accident. Period. But Huffpo blogger Bernie Shine sees it as the result of almost criminal negligence on the part of the parents and the zoo — and behind them the whole quasi-criminal enterprise of keeping animals in captivity.

Great apes are magnificent animals and their uncanny likeness to us commands a certain respect as well as delight (God’s joke on the human race?). I am sorry that Harambe, a member of the endangered western lowland gorilla species, had to be shot. But to portray the animal as “the only innocent character in this tragedy,” as Shine did, is going a bit far.

I am inclined to agree with him that zoos are rather dismal and unnecessary places in these days when everything can be seen in 3D movies — but there’s a time and a place for everything. And the saving of a child is not the time for an animal rights manifesto.

And yet there are highly respected intellectuals who might agree with him. Princeton philosopher Peter Singer famously wants legal rights conferred on great apes. With leadership like that spreading confusion about the relative value of human life, we can hardly be surprised that among the protestors at the zoo was a child holding up a sign reading, “Protect the Animals, Keep Brats out of the Habitats!”

If you don’t have a moral compass, you end up in some pretty strange places.

See the video of the Cincinnati zoo director’s comments here.

Originally published May 31, 2016 at Mercatornet.com. Republished with permission.