Embryo Mix-Up is Tragic. But So is IVF in Itself 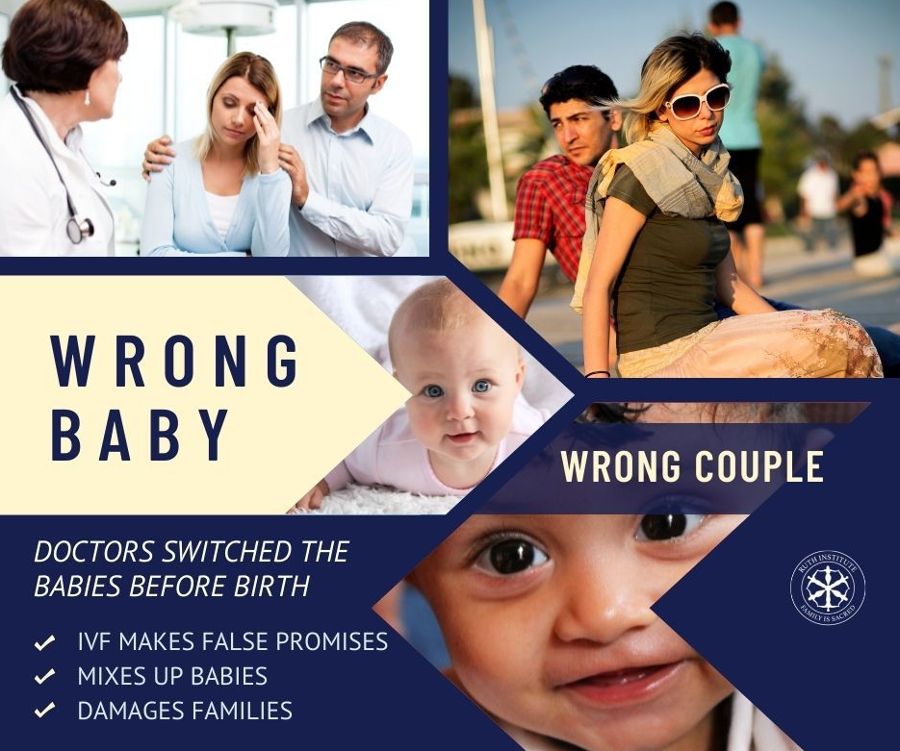 A California couple is suing a fertility clinic for implanting the wrong embryo. Ruth Institute President Dr. Jennifer Roback Morse, Ph.D., said, “I feel for these parents. I’m sure this was, and is, a traumatic experience for them all, including the big sister who doesn’t understand why they have to give the baby back.”

“It’s even more traumatic for the baby,” Morse continued. “Which of these two women is her ‘real’ mother, the genetic mother or the gestational mother? We shouldn’t have to ask these questions. The woman who carried the child for nine months surely bonded with that child, while the child experienced that woman as her mother.”

“IVF makes false promises. The couple does sometimes, though not always, get a baby. But it is objectively not the same experience as conceiving a child through the marital embrace.”

A New Level of Frankenstein Hubris

“IVF goes beyond the contraceptive ideology, which says people can have sex without having babies. IVF says you can have babies without having sex. There are no embryo ‘mix-ups’ conceiving the old-fashioned way.”

The Cardinale family suspected they had the wrong baby almost from the outset, because there was no physical resemblance to either parent. But it wasn’t until the child was almost a year old that a DNA test confirmed their suspicion. The children were exchanged, and the Cardinales are suing the fertility clinic for medical malpractice, negligence, and breach of contract.

Morse observed: “The entire IVF industry, along with the medical and legal establishment that stands behind it, are also guilty of malpractice. They make money by convincing couples that a fertilized egg implanted in a woman’s body is the equivalent of conceiving the child through intercourse.”

“The whole industry needs to be scrutinized, and the premise on which it’s based, reconsidered,” Morse said. “We cannot apply enough regulatory band-aids to this industry to correct all these problems. The IVF industry should be abolished.”

An interview with Ruth Institute President Dr. Jennifer Roback Morse on “Women of Grace,” of the Eternal Word Television Network (EWTN), aired Nov. 12 and can be watched here.

Morse and host Johnnette Benkovic Williams discussed the abortion-breast cancer link, as well as three of Morse’s books: The Sexual State: How Elite Ideologies Are Destroying Lives and Why the Church Was Right All Along, Smart Sex: Finding Life-Long Love In a Hook-Up World, and Love and Economics: It Takes a Family to Raise a Village.

No Battle of the Sexes

This week’s Dr. J Show guest is Dr. Stephen Baskerville, an expert in the politics surrounding family court and divorce. He is widely recognized as an authority on fatherhood, family policy and sexual politics. His writings have appeared in leading national and international publications.

In this interview, Baskerville discusses masculinity, both toxic and healthy, as well as what it means to be a gentleman. His latest book is A Gentleman’s Guide to Manners, Sex, and Ruling the World: How to Survive as a Man in the Age of Misandry – and Do So with Grace.

These days, it’s difficult to know what a gentleman is, let alone how to become or behave like one. Men are afraid of being classically masculine for fear of being considered “toxic.” Relatedly, many women are confused about womanhood and what it means to be a woman.

Both men and women have different, complementary, and necessary responsibilities. Listen as Dr. Baskerville explains how, in a stable society, men and women never compete against each other. Such competition only serves to facilitate a destructive power struggle. By working together in harmony, husband and wife have more power than the state. The core problem is not inequality, but a lust for power.

Learn all about it by watching the Dr. J Show here.