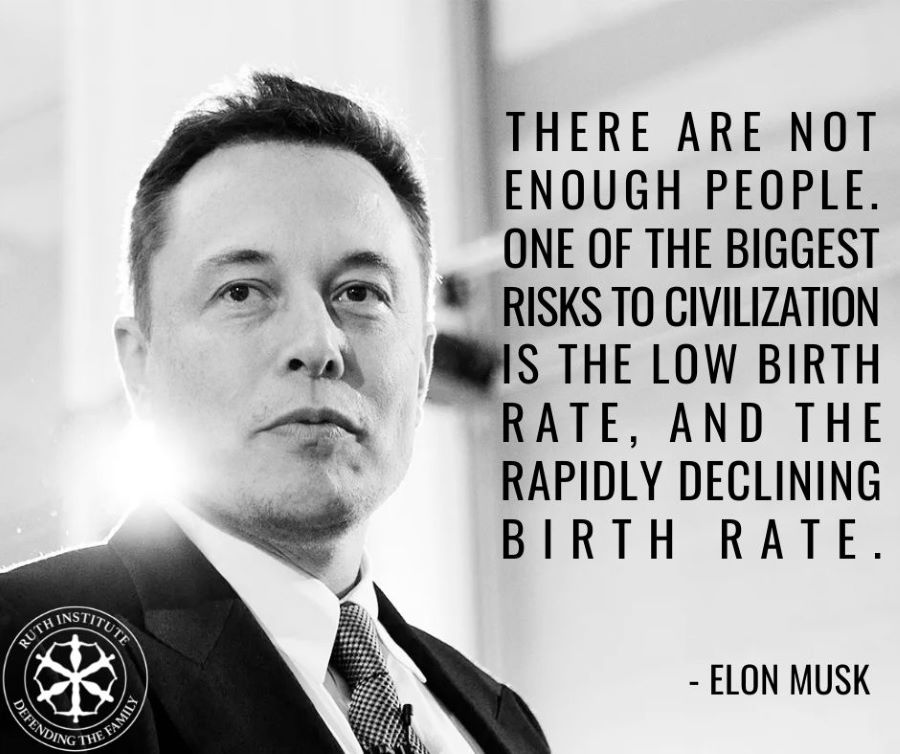 “The media cover Elon Musk’s views on just about everything,” said Ruth Institute President Jennifer Roback Morse, “but they studiously downplay his concern about the rapid, worldwide decline of fertility, also known as Demographic Winter.”

Since the news broke that he’s buying Twitter, the media has been all over the iconic businessman. While other billionaires like Warren Buffett and Bill Gates fund population-control efforts, Musk sounds the alarm on the coming depopulation crisis.

“This contradicts the myth of overpopulation,” Morse said. “Since the 1968 publication of Paul Ehrlich’s The Population Bomb, we’ve been told that there are too many people, and this will lead, very soon, to mass starvation,” Morse said.

“This lie has been used to justify horrors from legalized abortion to coercive population control, including forced sterilization, undertaken by the United Nations Population Fund.”

“Since 1950, the worldwide fertility rate has been cut in half. The CDC reports that the U.S. fertility rate is now the lowest on record, well-below replacement.”

“Almost every developed nation has below replacement fertility,” Morse noted. “It doesn’t take an eccentric billionaire to see that very soon worldwide population decline will begin.”

“The Ruth Institute is acutely aware of this reality. We have long been involved in educating on what could be the crisis of the century. Our Demographic Winter Resource Center has a wealth of information, including research reports and podcasts on the birth dearth.”

At the Ruth Institute’s upcoming Summit for Survivors of the Sexual Revolution, June 24-25 in Lake Charles, LA, Ruth Institute Communications Director Don Feder will lead a session on Demographic Winter. Feder has been involved with the issue for more than 20 years and has spoken throughout the world on declining fertility.

Prepare for a Post-Roe World at Ruth Institute Summit

Kristan Hawkins, president of Students for Life of America, will speak on what to expect in a post-Roe v. Wade America at the Ruth Institute’s 5th Annual Summit for Survivors of the Sexual Revolution June 24-25 in Lake Charles, Louisiana.

“We are so pleased to have Kristan speak at this critical time,” said Ruth Institute president Dr. Jennifer Roback Morse, Ph.D. “She has organized more than 1,200 Students for Life chapters around the country and has dubbed her fellow activists ‘The Pro-Life Generation,’ soon to be ‘The Post-Roe Generation.’”

“Kristan has been working with young adults toward a post-Roe world for years. With the leaked draft of a Supreme Court decision on Roe v. Wade, her keynote address will be the highlight of our Summit.”

Morse will also present Kristan with the Pro-Life Leadership Award at the Summit’s Awards Dinner.

“The Awards Dinner is always an occasion for good food and good fellowship. This year, our country faces historic conflicts over sexual issues. In addition to Kristan, we will give awards to other truly remarkable individuals who have done much to advance the cause of the family.”

The Activists of the Year awards will go to Erin Brewer and Maria Keffler for their pioneering work protecting children from the transgender ideology through their co-founded organization, Advocates Protecting Children.

The 2022 Witness of the Year is Walt Heyer, who identified as a transgender woman for eight years and now has a passion to help others who regret their gender change.

The Scholar of the Year is Dr. Scott Yenor, professor of political science at Boise State University. Among his many works is, Family Politics: The Idea of Marriage in Modern Political Thought.

Crusader Against the Culture of Death

The latest Dr. J Show guest is former lawyer Wesley Smith, Chair and Senior Fellow at the Discovery Institute’s Center on Human Exceptionalism. Wesley is the author of 14 books, including Culture of Death: The Age of “Do Harm” Medicine, a warning about the dangers of modern bioethics. He has been honored by the Human Life Foundation as a “Great Defender of Life” for his work against suicide and euthanasia.

Smith and Morse begin by discussing the leaked SCOTUS draft that suggested overturning Roe v. Wade. Hear their take on who could have done it and why, plus how this might affect the Supreme Court’s final decision.

Smith points out that “logic” is used to say that there’s no difference between a fetus and an infant, so infanticide should be legal. Other “logic” says certain people have less value. Someone with dementia or Alzheimer’s can be starved and dehydrated to death, Smith says, mentioning Terri Schiavo, who was starved to death because she had a severe cognitive disability.

“You wouldn’t do that to a dog, or you’d go to jail,” Smith points out. “Osama bin Laden wasn’t starved to death because that would be a human rights abuse, yet death by starvation is acceptable for the disabled who are seen as worthless. Starving Terri Schiavo to death was called medical ethics.”

The Hippocratic Oath states that doctors must treat all patients equally. However, now doctors are not allowed to do what their medical training tells them is best. With gender transitioning, doctors are told they have to actively harm patients.

The Biden Administration claims that all doctors agree that “trans” affirming drugs and surgeries are the best course of action for gender-confused children, but that is false. Puberty blocking drugs have not even been officially approved. They inhibit proper bone growth and sterilize patients.

Smith also delves into the new cult of transhumanism and how suicide prevention is becoming suicide promotion. “Death is being sold as a solution to human problems.”

Be enlightened by watching the full interview.