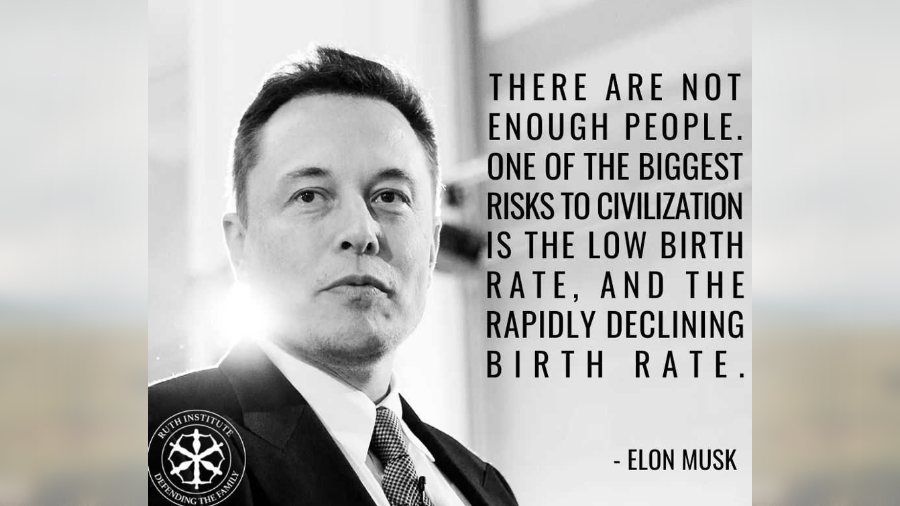 “We should celebrate the arrival of the 8 billionth person on earth, not bemoan it,” said Ruth Institute President Dr. Jennifer Roback Morse, Ph.D.

According to the United Nations Population Division, the world’s population will reach 8 billion around November 15.

“Get ready, the population-control crowd is about to go into overdrive,” Morse warned. “They’ll be whining about overpopulation, the depletion of resources, carbon footprints, and other nonsensical notions.”

“No one knows how many people the planet can accommodate. Thomas Malthus thought the world was overpopulated in the late 18th century when there were a billion of us. When Paul Ehrlich wrote The Population Bomb in 1968, and the earth’s population was 3.6 billion, he predicted worldwide starvation in the 1970s. It never happened. November 15 will be a repeat of overpopulation hysteria.”

“In reality, with falling fertility, the world’s population will begin to decline as early as 2050. In takes an average of 2.1 children per woman just to maintain current population. Between 1950 and 2017, worldwide fertility was cut almost in half, from 4.7 to 2.4. In Italy and Japan, the number of newborns is so small, they could disappear in the not-too-distant future.”

Elon Musk, reputed to be the world’s richest man, put it simply: “If people don’t have more children, civilization is going to crumble.”

“Each child born is not only a blessing but a precious resource,” Morse said. “Thanks to human ingenuity, we’ll always find the natural resources we need. But population is the ultimate resource that drives civilization.”

“While most of the world may fret, the Ruth Institute has plans to celebrate the arrival of baby 8 billion.”

For more information on the truth and consequences of declining fertility, check out the Ruth Institute’s Demographic Winter Resource Center.

This week’s Dr. J Show guest is Jim Havens, host of “The Simple Truth” radio show on The Station of the Cross Network and the organizer of The National Men’s March to Abolish Abortion and Rally for Personhood. The Men’s March will be in Boston October 15 and Baltimore November 14.

“Men have been sidelined in this issue, and it’s time for us to get off the sidelines and take the lead,” Havens says. “We need to stand up and face the reality of the ongoing daily mass murder of the preborn and to take responsibility for our part in this: what we’ve done, what we haven’t done … . To resolve to do more to get to the end of [abortion] as urgently as we can.”

There have been four Marches in past years. Each ends with a rally that includes top-notch speakers, including Rev. Walter Hoye. At the rally, women and children are invited to join in.

Some men have traveled to every rally, Havens says. He hears testimonials about how the event touched and inspired them personally. As a result, many have started rallies in their own areas.

“This is needed everywhere. Men just need to start gathering together and standing up together … . Good things happen when men come together and choose the good … . The Lord moves through that and there’s even greater power. People will find that too if they come to one of the marches.”

Morse added, “This is what it means to be a man: to stand for the weak, to protect the vulnerable. That’s what manhood is all about. If you’re fed up with the message of toxic masculinity … this is a great place for you to stand against all that by showing up and showing your solidarity with the weak and with the preborn.”

Check out TheMensMarch.com for more information, and spread the word!

Watch the full interview, Including Havens talking about the Boston Catholic diocese blocking efforts to promote the March!

The authors of the cynically misnamed “Respect for Marriage Act” have whipped up hysteria over the possibility that the overturn of Roe v. Wade portends the immediate overturn of Obergefell v. Hodges.

Acting on the philosophy of “never let a good crisis go to waste,” the Sexual Revolutionaries are trying to promote their agenda and stir up their base. Fair enough. Two can play this game. Allow me to state without fear or apology: Redefining marriage was bad public policy in Obergefell in 2015 and it is bad public policy in HR 8404 today. Here‘s why:

The essential public purpose of marriage is to connect mothers and fathers to their children and to one another. All the stated purposes of the newly redefined concept of marriage are either private purposes or inessential purposes.

“It’s ironic that Sexual Revolutionaries harangue us about men being violent predators of women, yet give them access to women changing clothes,” said Dr. Jennifer Roback Morse, Ph.D., President of the Ruth Institute.

Members of Vermont’s Randolph Union High School girls volleyball team objected to the presence of a ‘trans female’ while they were undressed. The students said the biological male was staring at them and making inappropriate comments.

Morse noted: “The school told the team that the male student had every right to be there and is now investigating the females for harassment of him. The girls must change in a bathroom with a single toilet stall, while what used to be their group changing room was turned over to the ‘trans’ student.”

“Among other things, this is a war on modesty,” Morse said. “The school presumes to order these young ladies to take their clothes off in front of a boy who says he’s a girl. They are supposed to be okay with this. The school is punishing them, rather than the voyeuristic boy.”

“Modesty aside, this is dangerous. In Virginia last year, a girl was raped in a restroom by a boy wearing a skirt. When her father protested at a school committee meeting, he was removed in handcuffs. Similar incidents have occurred in women’s prisons and homeless shelters.”

“Women are entitled to privacy and protection from predators,” Morse said. “The Trans Activist lobby claims that a self-described trans person couldn’t possibly be a predator. They are not only denying biology but reality as well.”

Morse clarified, “We aren’t saying every male who says he’s female is a predator, only that men who are predators are going to be attracted to using the trans label to access females in vulnerable situations. Any fool can see that. This subset of ‘trans’ people have nothing in common with the confused teenager having an identity crisis.”

“Once the Supreme Court said the sex of the body was irrelevant to marriage in Obergefell, governments across the country rushed to remove sex from marriage licenses and birth certificates. Then schools allowed boys to invade girls’ restrooms. Now a girls volleyball team is told they must allow a biological male to watch them undress. How long are we going to allow this to continue?”