Elites are the Ones Who are Dividing America 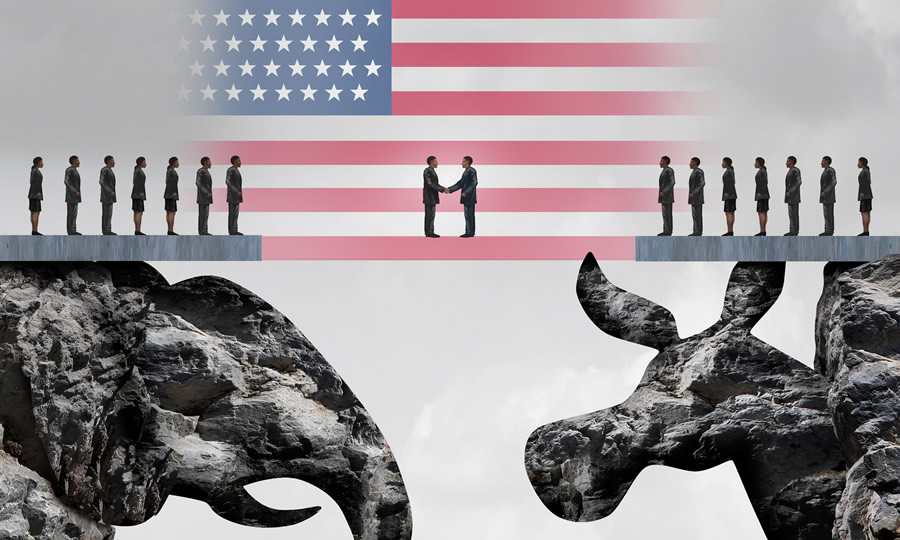 McCONNELLS MILL, Pa. — Darcelle Slappy says Democrats and Republicans who live in places like this part of Western Pennsylvania are a lot closer than how they’re portrayed on TV.

“Unlike Washington, we are all just a few notches from each other in either direction,” Slappy says. “We have much more that draws us together than divides us.”

In fact, she says the divide in this country isn’t Republican versus Democrat: “The real division is between the elites and us.”

He wrote, “Across the land, before dinner parties or block parties, the refrain ‘I hope none of them will be there’ is uttered with increasing frequency, referring no longer to people of another race or religion — bad enough — but to people from a different political party.”

But Slappy, who is attending the annual Heritage Festival at the state park, doesn’t see her community that way. The Democrat, along with her husband, Tony, their 14-year-old son, Damani, and their infant granddaughter, Ivy, is wearing a T-shirt emblazoned with words “Darcelle Slappy, Green Party Candidate, PA State Representative, District 10.”

Slappy was forced to run on the Green Party ticket because the current incumbent, Republican Rep. Aaron Bernstine, won the general election nomination as both a Republican and a Democrat — a common move that should have assured him no opposition.

But then along she came, a Big Beaver Falls Area School Board member who collected enough voter signatures to get her name placed on the ballot.

She and her family are African-American in a sea of mostly white festivalgoers. This doesn’t faze her. She shakes hands and introduces herself to potential voters as fiddle music plays in the background.

This time, she says she’s running for state office because she genuinely cares about her community. And, by the way, she could care less if you voted for Donald Trump or Hillary Clinton for president.

“I have friends who voted for Trump and who are strong Republicans, and I would have never known until after the election and I saw their Facebook post,” she says. “That’s because politics never really came into our everyday conversation. We were more worried about how we’re tailgating at the next high-school football game.”

The vitriol of Washington politics has certainly escalated since the late 1990s, when it was granted a big stage on cable TV with a nonstop news cycle. In the last 10 years, the rise of social media has fueled even more mocking and destruction.

A 2017 Pew Research survey found that 32 percent of Americans hold a “roughly equal number of conservative and liberal positions on a scale based on 10 questions asked together in seven surveys since 1994. As recently as 2015, 38 percent had this mix of values — and 49 percent did so in 1994,” reflecting a growing polarization between Republicans and Democrats.

Ronald Brownstein, a senior editor for The Atlantic and senior political analyst at CNN, recently issued a bleak tweet: “Today felt very much like an update of the 1850s: 2 very distinct parts of US that no longer care to even fake that they respect or value the other. Like Trump, #Kavanaugh built his strategy on rallying 1 side of that divide vs the other. Seams are unraveling — not just on #SCOTUS.”

Slappy acknowledges there’s a national schism but says that she and her neighbors see Washington as divided, not their communities. James Butler, a local mayor and vice president of the local Rotary club, agrees.

He is a Republican, but he says his borough council is made up of elected Democrats and Republicans, and he says partisanship is never a part of governing. “Everybody has their ideas of what they feel is best for the community, but at our level, it’s not really a Republican or a Democrat thing. It’s more what can we do to solve the problem,” he says. “Our great division in this country doesn’t come from here, it comes from the political class.”

In the elite bubbles, it feels that politics is roiled by division. But in other parts of the country, where people are focused on local issues, many Americans still feel unified. Slappy and Butler epitomize this collective spirit. The elites in cities like Washington, D.C., and New York, says Slappy, “don’t seem to get that.”

Butler, for his part, isn’t sure what it will take to close this compassion gap. But he says, “I just think it would be better for all of us if it did.”