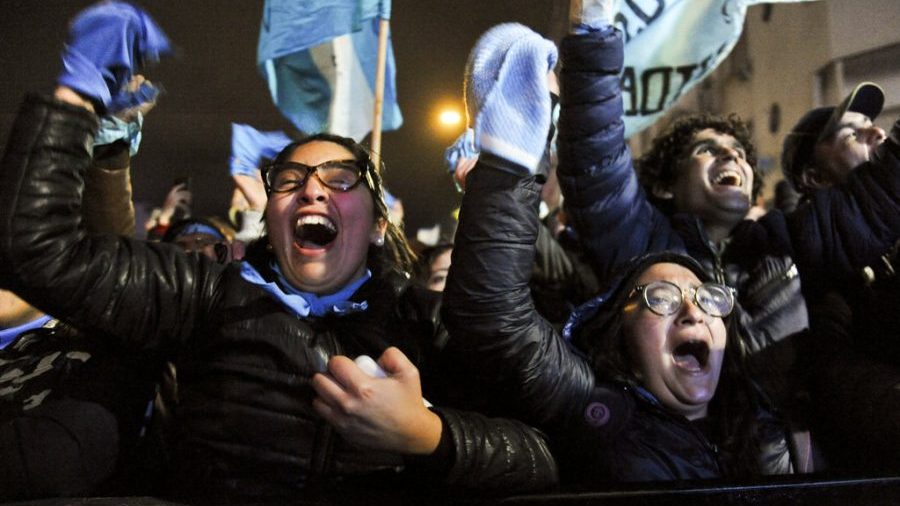 Pro-life demonstrators against decriminalizing abortion celebrate outside Congress in Buenos Aires, Argentina, Thursday, Aug. 9, 2018. The Argentine Senate rejected the bill to legalize elective abortion for pregnancies up to 14 weeks.

Argentina’s Senate voted early Thursday to reject a bill proposing the national legalization of abortion, following months of protests and debate between pro-lifers and abortion advocates.

The Senate rejected the proposed bill 38 to 31, CNN reported Thursday. The vote comes after Argentina’s lower house of Congress voted to legalize abortion until 14 weeks of pregnancy on June 14.

The bill would have allowed women to have abortions after 14 weeks in instances of rape or when the mother’s health is in danger. A minor who was raped would also be allowed to abort without having to inform her parents or the authorities under the proposed bill.

Like in Ireland, the proposed legislation would have also mandated that privately owned Catholic hospitals perform abortions without exception. Exceptions would be given only to individual objectors.

The vote is “a step backward for women’s rights and women’s health,” Institute for Statecraft’s Latin America program director, Celia Szusterman, told CNN. It’s a “sad day … not only because of the way the vote went but the way the campaign for and against went. It was so divisive,” she added.

The bill sparked intense debate ahead of Thursday’s vote. Thousands of Argentinian pro-lifers gathered July 8 in front of Argentina’s most famous shrine, the Shrine of Our Lady of Lujan, to pray the nation wouldn’t pass the proposed bill. Hundreds of doctors also protested against allowing women to have elective abortions ahead of Thursday’s vote.

“Argentina made the right decision in voting against expanding abortion in the country, and voting to remain a pro-life country,” Students for Life International Programs Director Ally Bowlin said in a Thursday statement. “Abortion does not help women, it harms them, and the Argentina senators who voted against legalizing abortion should be applauded for their courage in standing up to the abortion lobby.”