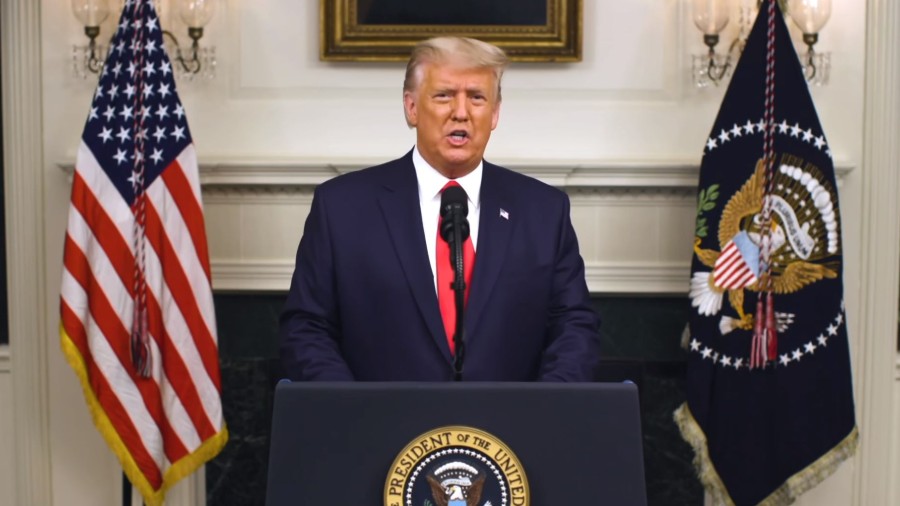 President Donald Trump told Americans why he has not conceded the election in an unprecedented video message late Wednesday afternoon that he said “may be the most important speech I’ve ever made.”

“The constitutional process must be allowed to continue,” Trump said in the speech recorded at the White House as his reelection campaign pursued litigation in several states and state legislatures investigated voter fraud.

Concurrently, Trump’s legal team is challenging the election results in those three states as well as Georgia (16 electoral votes), Nevada (six), and Wisconsin (10).

“All you have to do is watch the hearings and see for yourself the evidence is overwhelming. The fraud that we’ve collected in recent weeks is overwhelming having to do with our elections,” Trump said.

The president’s remarks, recorded and released without notice to the White House press corps, went for 46 minutes and offered the most detailed case yet for his challenges of the unofficial results.

The Electoral College will pick the winner Dec. 14.

“There is still plenty of time to certify the correct winner of an election, and that’s what we are still fighting to do,” Trump said. “But no matter when it happens, when [witnesses] see fraud, when they see false votes, and when those votes number far more than is necessary, you can’t let another person steal that election from you.”

Statement by Donald J. Trump, The President of the United States

Trump said that while “I don’t mind if I lose an election,” he doesn’t want to see an election stolen.

He said “our election system … is now under coordinated assault and siege.”

“Ultimately, I am prepared to accept any accurate election result and I hope that Joe Biden is as well,” Trump said.

Trump complained about the risk inherent in mail-in voting and early voting well before the campaign’s final weeks, as well as lack of safeguards against voter fraud.

“We used to have what was called Election Day. Now we have election weeks and months, and lots of bad things happened during this ridiculous amount of time, especially when you had to do almost nothing to exercise our greatest privilege, the right to vote,” Trump said.

“My opponent was told to ‘Stay away, don’t campaign, we don’t need you, we’ve got it,’” Trump said. “In fact, they were acting like they already knew what the outcome was going to be, they had it covered, and perhaps they did, very sadly for our country. It was all very, very strange.”