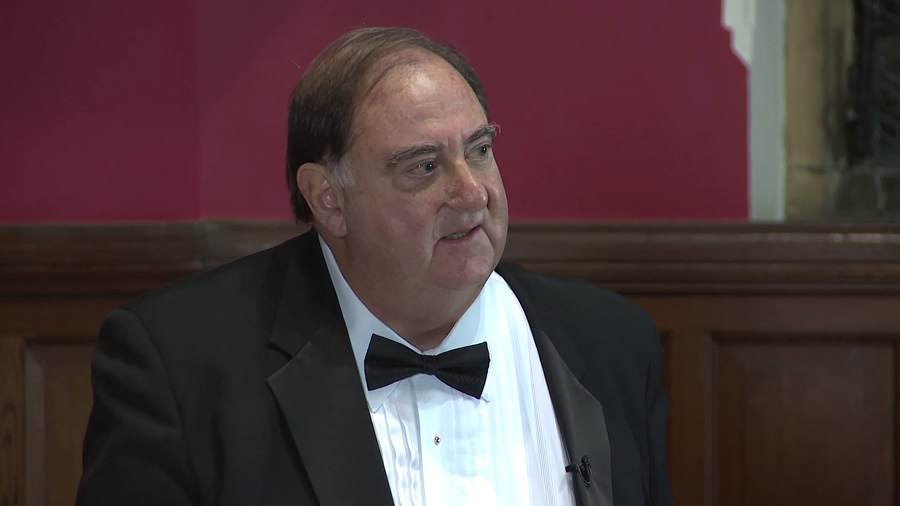 In this screengrab from a video filmed on Nov. 15, 2012, Stefan Halper speaks at the Oxford Union's Debating Chamber.

The Justice Department report that will be released in December regarding FBI surveillance of the Trump campaign will include information about Stefan Halper, the former Cambridge professor who established contact with multiple Trump campaign aides in 2016 while serving as an FBI informant, people who reviewed a draft of the report told The New York Times.

The Justice Department’s inspector general found that the FBI did not attempt to plant informants or undercover agents inside the Trump campaign, according to The NYT.

But the bureau did rely on at least one informant, Halper, to obtain information from two Trump campaign advisers, Carter Page and George Papadopoulos, about any possible ties they had to Russia.

An undercover government agent who worked with Halper during meetings he had with Papadopoulos worked for the FBI, The NYT reported. Halper introduced the agent, Azra Turk, to Papadopoulos in September 2016.

The Daily Caller News Foundation reported March 25, 2018, that Halper first met Page on July 10, 2016, at a political event held at Cambridge. Halper reached out to George Papadopoulos on Sept. 2, 2016, with an offer to fly the Trump aide to London to discuss writing an academic paper.

Papadopoulos accepted the offer, and flew to London on Halper’s dime. While there, Papadopoulos met with Halper and Turk.

Halper paid Papadopoulos $3,000 under the auspices of writing a research paper about energy issues in the Mediterranean Sea. Papadopoulos said he grew suspicious of Halper and Turk during their London meetings because they asked random questions about Russia’s cyber activities during the campaign.

The NYT article did not mention whether Horowitz scrutinized Halper’s contact with Page on July 10, 2016. The timing of that encounter is important because it was several weeks before the FBI officially launched its counterintelligence investigation of the Trump campaign. Former FBI officials have insisted that the investigation did not begin until July 31, 2016.

Page has said he and Halper remained in contact through September 2017, when the fourth and final surveillance warrant against Page expired. Page has released an email that Halper sent him June 28, 2017, in which the professor indicated he believed Page’s denials about colluding with Russia.

The special counsel’s report found no evidence that Page, Papadopoulos, or anyone else on the Trump team conspired with Russia.

The NYT report revealed other conclusions reached by Michael Horowitz, the inspector general.

According to the paper, Horowitz will “sharply criticize” FBI leadership for the way they handled some aspects of the Trump-Russia investigation. The will be criticized for various errors and omissions in applications for surveillance warrants against Page.

The draft of Horowitz’s report includes a chart that lays out multiple mistakes that the FBI made, according to The NYT.

Horowitz will also criticize the FBI for declining to mention problems with the Steele dossier in the Page surveillance warrant applications. Investigators included parts of the dossier, written by former British spy Christopher Steele, in the surveillance applications. The dossier’s core claim of a “well-developed conspiracy of cooperation” between the Trump campaign and Russia was debunked by the special counsel’s report.