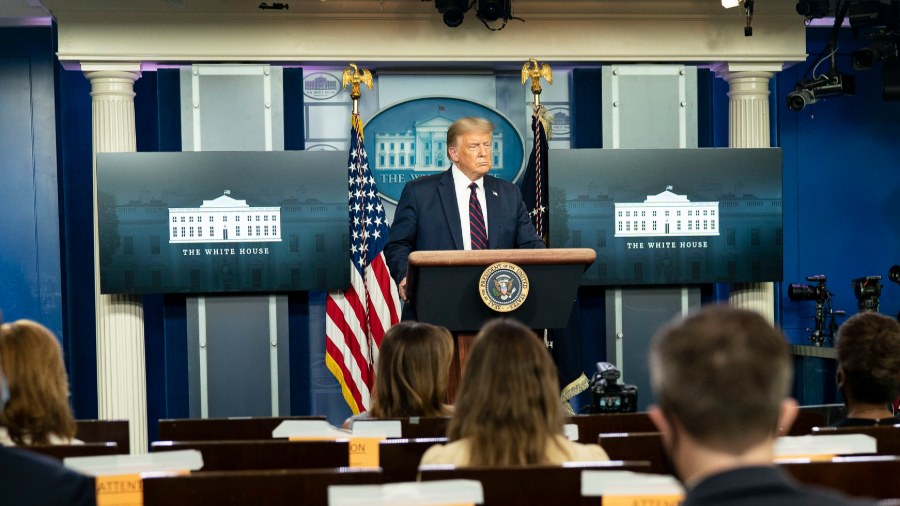 President Donald Trump listens to a reporter's question during an Aug. 4 news conference.

A few minutes into a press briefing Monday evening, President Donald Trump calmly walked away from the lectern after a Secret Service agent interrupted him and whispered a few words.

“Excuse me,” Trump said to reporters, and departed the White House briefing room without giving a reason.

Confusion ensued for about 10 minutes until, shortly after initial reports of a nearby shooting, Trump returned to the press room as calmly as he had abruptly left.

“Sorry for that. There was a shooting outside of the White House, and it seems to be very well under control,” Trump told reporters. “I’d like to thank the Secret Service for doing their always quick and very effective work.”

“There was an actual shooting,” the president said. “Someone has been taken to the hospital. I don’t know the condition of the person. It seems the person was shot by Secret Service.”

Shortly before 8 p.m., the Secret Service announced on Twitter that an unidentified man and a Secret Service officer had been taken to a Washington hospital.

“At no time during this incident was the White House complex breached or were any protectees in danger,” the tweet said.

Update: the investigation into a USSS officer involved shooting is ongoing. A male subject and a USSS officer were both transported to a local hospital. At no time during this incident was the White House complex breached or were any protectees in danger.

The shooting occurred at 17th Street and Pennsylvania Avenue, according to the agency.

As reporters’ questions flew earlier, Trump stressed that he didn’t have any details.

“It seems the shooting was done by law enforcement,” the president said. “It was the suspect who was shot.”

One reporter asked:  “Are you rattled by this at all, Mr. President?”

Trump quickly responded: “I don’t know, do I seem rattled? It’s unfortunate. But the world has always been a dangerous place.”

He referred to Fox News Channel’s White House correspondent, John Roberts, who had been outside and reported hearing two shots.

Roberts spoke up in the briefing, at Trump’s request, to say that the two shots were fired in close succession.

Roberts later reported that the incident occurred about 5:48 p.m. at the southeast corner of 17th Street and Pennsylvania Avenue, on the far side of the Eisenhower Executive Office Building next to the White House. He said he “heard two very loud pops in rapid succession.”

News footage showed uniformed officers appearing to administer aid to someone on the pavement.

When a reporter asked whether the Secret Service had taken him to a White House bunker, Trump said he had gone back to the Oval Office.

“He said, ‘Sir, could you please come with me?’” the president said, recalling the agent’s words.

“You were surprised. I was surprised also,” he told reporters. “I think it’s probably pretty unusual, but [the Secret Service agents are] very, very professional people. They do a fantastic job, as you know.”

He said he was told that no law enforcement officers had been injured, and that the person who was shot had been armed.

“I feel very safe with the Secret Service. They are the best of the best,” Trump added.

Asked why he came back to continue the briefing, Trump said: “I didn’t even think about not coming back.”

His Secret Service detail told him he had to wait a little while, the president said.

At one point, Trump described the shooter as “pretty close” to the White House. In response to a later question, he said, “I don’t believe anything was breached” and added that the person in question was “relatively far away.”