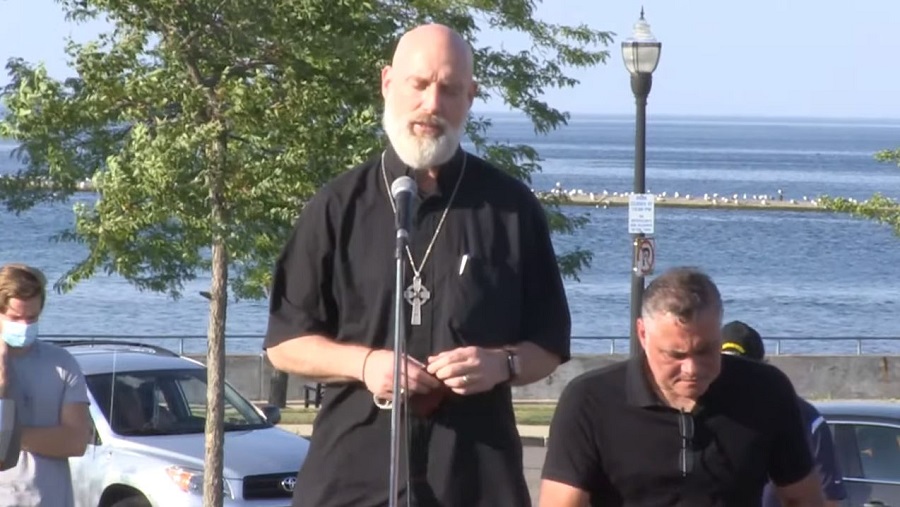 This week, as the city of Kenosha, Wisconsin, became a national epicenter of grief and protest, churches united to respond. Christian clergy of diverse ethnicities and denominations joined together for public prayer gatherings that have swelled from dozens to hundreds of believers.

“Prayer fuels movements,” Lawrence Kirby, lead pastor of Acts Church Kenosha, told me. “I’m not suggesting we only pray and that’s all. But we can’t belittle the power of reaching out to God, connecting with God, and getting strategies from God.”

Eirik Olsen, an Anglican priest who serves Light of Christ Anglican Church, led prayer alongside his friend Kirby. “Lamenting is a way of being present to the real situation,” he said in a phone interview. “Christ became flesh and dwelt among us, in order for us to know that God really is with us in our vulnerability.

“The authority of the church to be a healing agent in the culture has to do with our willingness to so love that we enter into the sorrow,” added Olsen.

This public witness of unity followed the shooting of Jacob Blake III, a 29-year-old black man and father of six children who is hospitalized and reportedly paralyzed following a policing incident currently under investigation by the Wisconsin Department of Justice.

For three nights starting Monday, hundreds gathered in downtown protests resulting in damage to local businesses and other fallout. But Kirby, who lives downtown, says many of the protestors were not from Kenosha.

“Our entire city is about 100,000 people,” said Kirby. “I know the people who are part of justice movements. And I’m telling you, walking downtown early this week, I’ve seen loads of people that I don’t recognize and aren’t from Kenosha.”

By Thursday, unrest in Kenosha had subdued to a smaller, peaceful contingent — in no small part because of how Blake’s family has responded, according to clergy.

“I’ve been blown away by the grace that his family is manifesting,” said Olsen. “Clearly his mother wants justice for her son. But to those who went to extremes, she has spoken about the value of preserving our city’s family businesses and how to respond rightly.”

On Wednesday, Blake’s mother Julia Jackson addressed a news conference. “My son has been fighting for his life,” she said through tears. “And we really just need prayers. As I was riding through the city, I noticed a lot of damage. The violence and the destruction … doesn’t reflect my son or my family.”

Olsen saw moral courage in her statement. “Only his mother had the moral authority and the platform to speak those words of peace, and she did. I’m amazed by how much she has been talking about Jesus.”

The family has roots in the African Methodist Episcopal (AME) denomination.

“They have a history of faith and advocacy back to his grandfather, Reverend Jacob Blake, Sr.,” said Kirby. “He pastored Ebenezer AME Church in Evanston, Illinois, one of the flagship churches in that historically black denomination.”

Many have sought political solutions to the tensions in Kenosha. Yet Pastor James Ward, a pastor to the Blake family for over 30 years, spoke powerfully about the need to approach the issue as a spiritual problem, as well.

“It’s a sin problem and not a skin problem,” Ward told CNN. “Sin is the root. Racism, these other things, are the fruit. And … if you keep picking the fruit off the tree, and you don’t kill it at the root, the fruit’s only going to grow back. That’s why we hear calls for change each time, but we don’t see change because we’re not dealing with the root.”

One way local pastors have been addressing the spiritual root of these problems is through collaborative public prayer gatherings. And Olsen said the foundation for this movement had already been laid when the protests began, through longstanding relationships among clergy.

“For three years, I’ve met weekly with a group of evangelical ministers who encourage each other,” he said. “Then another group of city pastors are more activist on social justice. As Jesus followers, they are committed to protest injustice in peaceful ways. We all united this week.” 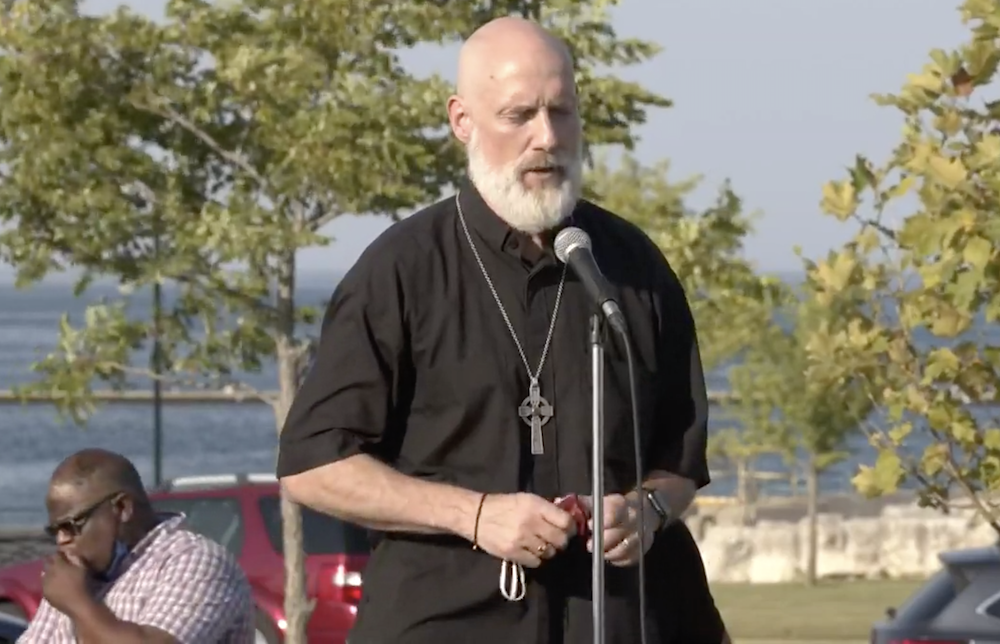 The son of a minister, Kirby noted prayer strategies long used by the black church. “When we look at the civil rights movement, momentum was born out of people who prayed,” he said. “Before every protest, march, sit-in, demonstration, and boycott, they gathered to pray.”

This citywide ecumenical relationship-building reflects the model that OneRace Movement has pioneered in the Atlanta area, with hundreds of pastors involved. Kirby, who co-leads the justice-focused clergy group in Kenosha, says honesty and humility are vital to cross-cultural relationships. 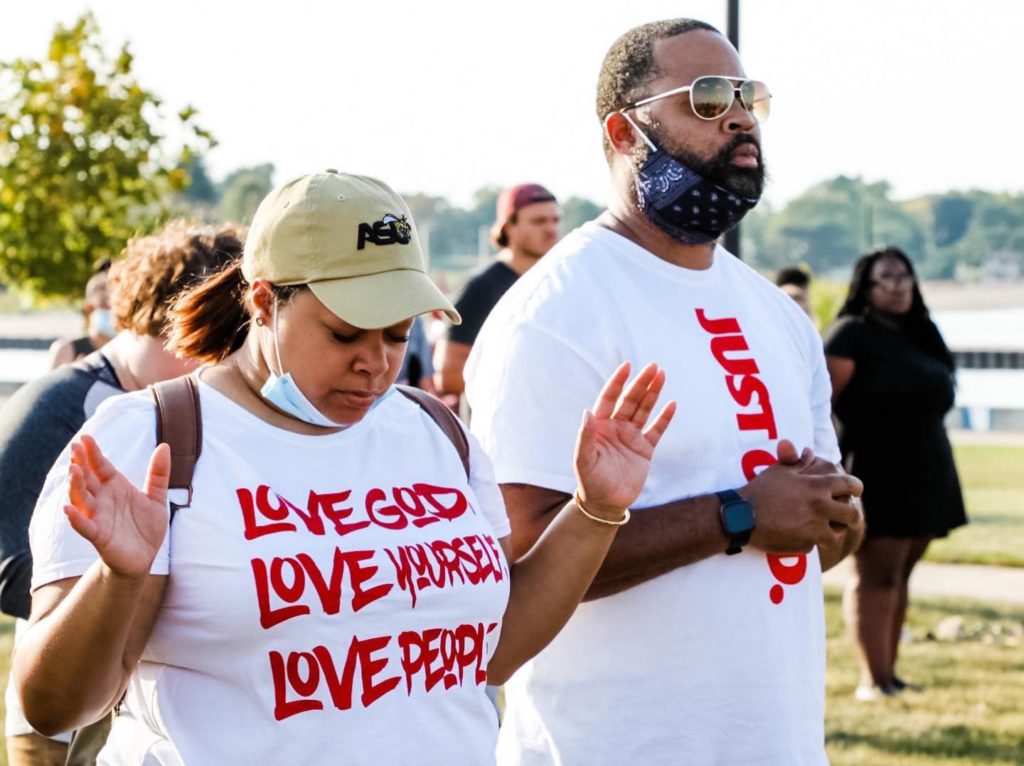 A couple prays together during the worship gathering in Kenosha, WI, on August 27.

“What black people in America face is vastly different than what my white brothers and sisters experience,” he said. “Certain words and actions perpetuate stereotypes of African Americans. What takes the most time in honest relationships is to expose someone to those experiences.”

Having grown up in majority-white suburbs, Olsen — who is Kirby’s elder by a few decades — affirmed he has learned a lot by listening to trusted friends of color. “The only way to do this well is to get close [with] people of different lived experiences and ethnic backgrounds,” said Olsen.

*Disclosure: Fr. Eirik Olsen serves on the board of The Roys Report.