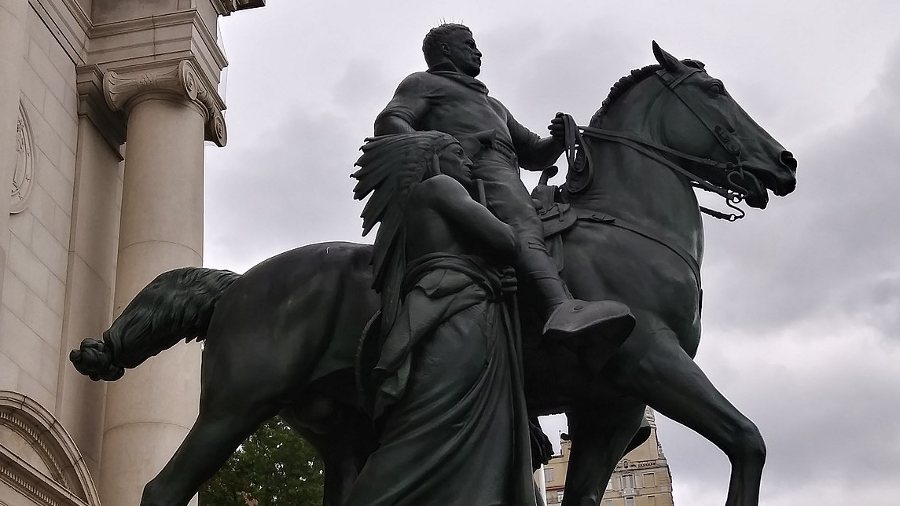 It would seem that in our day, American history is being dismantled one statue at a time.

The bronze sculpture of Roosevelt on horseback with Native American and African figures depicted subjugation and racial inferiority, the American Museum of Natural History said.

A friend remarked, “The idea of erasing Teddy Roosevelt from that specific museum in New York — my goodness, they just made a beloved movie about 15 years ago where Teddy Roosevelt (played by Robin Williams, no less) comes alive at that very museum — is utterly absurd and is the work of Stalinists and Maoists.”

All Men Are Created Equal

Two months ago, NYC had removed from the City Hall a statue of Thomas Jefferson because our third president had owned slaves.

Jefferson and slavery is a complicated subject. While he owned slaves, he did much to try and uproot the evil practice. I think he felt it was too massive to uproot in his day, but he helped work toward its eventual removal.

“Take away a people’s roots, and they can easily be moved.”

Of course, he was the author of the first draft of the Declaration of Independence, which articulates a biblical view of human equality — one incompatible with slavery.

As Jefferson put it, “We hold these truths to be self-evident, that all men are created equal, that they are endowed by their Creator with certain unalienable Rights, that among these are Life, Liberty and the pursuit of Happiness.”

While Thomas Jefferson personally didn’t live up to the biblical notions that he articulated in the Declaration, what he wrote still provides a worthy ideal to strive for — that we are created equal and have God-given rights.

Pioneers and Pathfinders Trigger The Left

Meanwhile, in Jefferson’s home town, Charlottesville, Virginia, the city council last year removed the statues of American explorers Lewis and Clark because the depiction of their Indian guide, Sacagawea, triggered many on the left as allegedly making her look obsequious.

Of course, Charlottesville was the place where there was an awful melee one weekend in August 2017, which left two policemen and one protester dead and 38 injured. The fight was over the threatened removal of the Robert E. Lee statue there. That particular battle over history drew blood. The statue has since been dismantled.

Imagine going through all the hardship of a dangerous trek for hundreds and hundreds of miles into the American wilderness, friendly and unfriendly, to see what was there.

Such was the case of Meriwether Lewis and William Clark — in their historic expedition in 1804-1806. The Louisiana Purchase of 1803 during Jefferson’s presidency was America’s single-largest land acquisition. Suddenly, territory totalling more than 800,000 square miles was instantly added to the United States of America.

Jefferson wanted to know what was on that land west of the Mississippi River, so his administration commissioned an expedition to report what was there. Hence, the Lewis and Clark expedition. Lewis and Clark, both of whom had ties to Charlottesville’s Albemarle County, Virginia, wisely chose Native American Sacagawea (among others) as a guide to help them.

In 1919, when Charlottesville celebrated the unveiling of the Lewis and Clark (and Sacagawea) monument, Edwin A. Alderman, the president of the University of Virginia (founded by Jefferson a hundred years before) remarked, “They gave their youth to self-sacrifice, glory, and adventure… They were pioneers and pathfinders in a gigantic Odyssey beside which the wandering Greeks were timid and provincial.”

The Campaign to Erase Our History

In 2018, Dr. James S. Robbins, a writer for USA Today, wrote the book, Erasing America: Losing Our Future by Destroying Our Past, warning us about our national historical revisionism.

The things I wrote about in 2018 when the book first came out — and I was kind of speculating about some things and some worst case scenarios. But today they are part of the news. The way that what has been acceptable in terms of the campaign to erase our history has become [commonplace] over the past few years — it’s phenomenal, and it’s scary.

In his book, Robbins writes:

The Founders were not fundamentally evil. Though flawed, they were great men who left a great legacy. We do not suffer the American nightmare; we live the American dream.

It seems like the followers of Marx are often succeeding in our day. He said, “Take away a people’s roots, and they can easily be moved.”

This Book Is a Vaccine Against Woke Idiocy, a Perfect Gift for Students