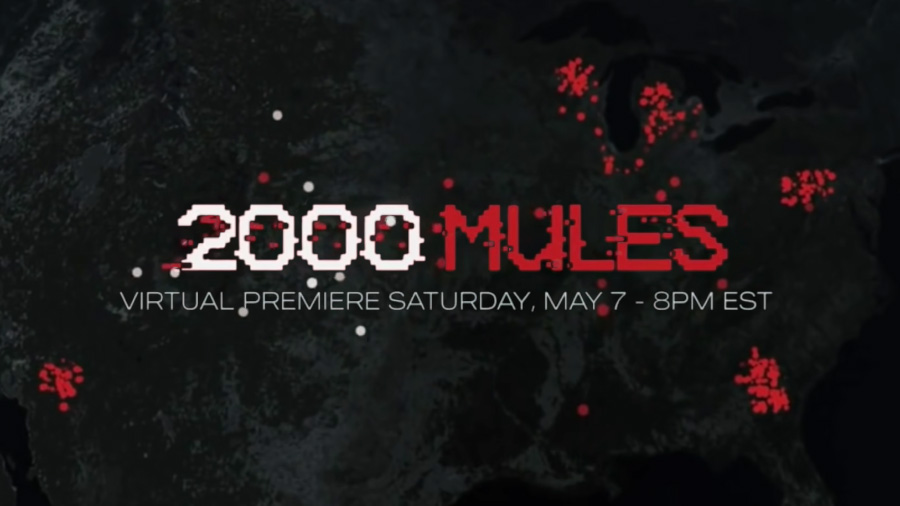 The new Dinesh D’Souza documentary film on the 2020 election, 2000 MULES, premiered online this weekend. As you know, it was made in collaboration with an organization called True the Vote, which has done a monumental amount of research on the stuffing of unsupervised ballot boxes in battleground states. His movie lays out their findings.

It opens with an orderly in-person election scenario — the way Election Day is supposed to be — with a lofty voiceover from Ronald Reagan. The contrast between this and what comes later in the film is dismaying. Whether or not it can be conclusively proven the 2020 election was rigged, we’ve got a BIG problem with our elections.

The film transports us back in time to Election Night, with stories from puzzled reporters of vote counts being stopped in the middle of the night and, the next morning, battleground states that had been solidly in Trump’s column being miraculously flipped for Biden, by razor-thin margins. Afterwards, reporters with their marching orders repeat the same mantra over and over: “The 2020 presidential election was the cleanest, the safest, and most secure election ever in American history!” (Sorry, but whenever someone says that, I’m reminded of the line from The Manchurian Candidate, “Raymond Shaw is the kindest, bravest, warmest, most wonderful human being I’ve ever known in my life.”) Anyone who questions this is supposedly perpetuating “the Big Lie.”

D’Souza and True the Vote are just getting started. They have much more.

This movie shows how geopositioning technology was used by True the Vote to track the movements of ballot-box stuffers and — most compelling — how security cameras clearly show the (alleged) stuffing itself, done with gloves that were peeled off after each drop-off and placed in nearby trash cans. Traffickers photograph the ballots before dropping them in, presumably so they can get paid later.

The Emerging Evidence is Compelling

But you don’t have to be a tech wizard to understand what went on. D’Souza includes a roundtable discussion with Larry Elder, Sebastian Gorka, Eric Metaxas, Charlie Kirk, and Dennis Prager, who announced at the outset that he’s “agnostic on this question.” Others, such as Metaxas, professed to be extremely skeptical of how the election turned out and believed most of America is, too. (Polls bear that out.) It just never made sense to them that a weak candidate who campaigned from his basement and had so little enthusiasm from his party got more votes than Barack Obama did. But all they had seen so far were, as Kirk put it, “crumbs,” nothing cohesive.

“If I thought the President were a Nazi, I might steal the election,” Gorka said. And people on the Left definitely had been brainwashed to think Trump was one. Still, as Gorka pointed out, Trump had built more support from the black and Hispanic communities than any Republican President since the 1960s. And Biden STILL got more votes overall; how does that happen?

Larry Elder also brought up the media suppression of the Hunter Biden laptop story, which, as we all know, was de facto election interference. “That alone altered the election,” he said. But, of course, that story would need a documentary of its own.

They agreed that the people who say we have to “move on” are those in the elite who think Trump was an anomaly. Hugh Hewitt insisted, “Show me the proof and I WILL speak up, but I’ve not gone on board with ‘I know this was a fraud.’”

The “Fact”-Checkers Respond as You Would Expect

But then the evidence is presented, and it’s compelling. Just see the film; so much is visual. And afterwards, take a look at PolitiFact’s laughable “fact”-check of the 2000 MULES trailer. It’s just what you’d expect from those Poynter Institute propagandists.

Their headline says the premise of the trailer is “faulty.” But it goes on to refute that premise by stating a faulty premise of its own, that the 2020 election, with its widespread use of mail-in voting and lax security laws (thanks to Marc Elias), was the most secure in history. They must’ve heard that from some CNN reporter.

“Many states have laws allowing people to return completed mail ballots on behalf of others, such as family members,” Politico states. “Ballot drop boxes are more secure than standard mail boxes.” But returning a ballot on behalf of a family member is not what this documentary is about AT ALL. And, as one can see from the video, a drop box being tamper-proof has nothing to do with the legitimacy of the ballots being dropped into it. No one is there to ask, “Is this your ballot? Is this the ballot of a family member? Do you have…seven…registered voters in your household? Why are you here at 3 a.m.? And, uh, why are you wearing surgical gloves and carrying a camera?”

“The 2020 presidential election was secure and evidence from state and federal officials and courts shows no indication of widespread fraud,” Politico states. (Again, I’m reminded of “Raymond Shaw is the kindest, bravest warmest…”) Actually, this is incorrect. Recall that courts refused to look at evidence, citing it as “moot,” or even to grant standing to sue. And in Wisconsin, to cite just one example, an investigation is currently underway into organized illegal vote harvesting in nursing homes, statewide.

Allegations With No Adequate Explanations

“Experts say the evidence D’Souza points to is inherently flawed,” according to Politico. But they do not adequately explain how it’s flawed. Then they go on to smear D’Souza personally, as if that disproved the allegations made here.

They accuse D’Souza of using an out-of-context quote from Biden to make it seem as though he was admitting election fraud. I know that quote, and interpreted its inclusion as just a touch of humor and irony; does anyone think from it that Biden was actually admitting election fraud? I’m not sure even Biden’s shriveled brain would come up with that.

Anyway, the “fact”-check goes on, but there is nothing in it that discredits what True the Vote has put together.

One “expert” they talked with, a political scientist from the University of Florida, was doubtful because if there were such a scheme, it likely would have come to light by now. That’s no reason not to take seriously the evidence that IS coming out now.

Another political scientist — are these really the “experts” on interpreting cellphone data? — from the University of Wisconsin-Madison accuses True the Vote of “conspiracist” thinking. “They are interpreting data that confirms their pre-existing conclusions.” Does he not realize that’s exactly what PolitiFact is doing?

But D’Souza and True the Vote are just getting started. They have much more. Their documentary didn’t name any names or give addresses, but they say they’re “pulling the ripcord” very soon and releasing all their evidence, including the identities of over 2,000 ballot-trafficking mules and the addresses of all the ballot stash houses they located. They’re putting it all online.

And D’Souza has responded to PolitiFact’s “fact”-check.

The Associated Press also did a “fact”-check on 2000 Mules; this one was laugh-out-loud funny, specifically in its lame attempt to explain away the gloves being worn. We were going to fact-check the AP “fact”-check as well, but someone beat us to it, and this one is magnificent.