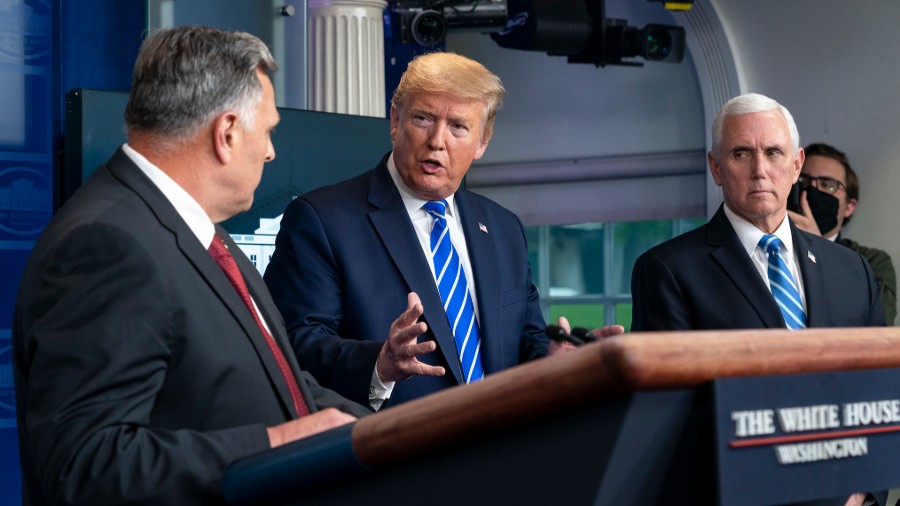 A new Department of Homeland Security study shows that heat, humidity, and sunlight could help to kill the coronavirus, offering a potential literal ray of hope against the pandemic as summer nears.

“Our most striking observation to date is the powerful effect that solar light appears to have on killing the virus both [on] surfaces and in the air,” Bill Bryan, the head of the DHS science and technology directorate, said Thursday at the White House press briefing. “We’ve seen a similar effect with both temperature and humidity as well where increasing the temperature or humidity or both is generally less favorable to the virus.”

Bryan pointed to displayed charts that showed on surfaces with temperature between 70-75 degrees Fahrenheit, and 20% humidity, the half-life of the coronavirus was 18 hours.

When humidity was cranked up to 80%, the half-life dropped to six hours. With temperature at 95 degrees and 80% humidity, the half-life of the virus was only one hour. It even worked with no sunlight.

Bryan said the test was done on nonporous surfaces such as door handles and stainless steel.

Bryan stressed that this is not a reason to stop social distancing in summer months, and that continued testing will be done.

President Donald Trump was enthusiastic that outdoors might be preferred to indoors.

“I think a lot of people are going to go outside all of a sudden. People that didn’t want to go outside, they’ll be going,” Trump said.

“Our task force actually believes, Mr. President, that if we continue these mitigation efforts in the days ahead as states implement their policies, including phased reopenings that will preserve those gains, we do believe that by early summer we can be in a much better place as a nation with much of this coronavirus pandemic behind us,” Pence said.

Pence said that 16 states have released formal reopening plans — 13 of those since the Trump administration issued its three-phase “Opening up America” guidelines for governors last week.

“To your point, Mr. President, states are beginning to make those plans,” Pence said. “We are encouraged to see so many states embrace the phased approach to reopen their economies.”

However, in response to a question, Trump again expressed his anger with Georgia’s Republican Gov. Brian Kemp for allowing spas, salons, tattoo parlors, and other similar businesses where germs can easily spread to reopen.

On another front, many hospitals across the country feeling financial strain from the COVID-19 virus heard welcome news.

“Given the unique burden on hospitals, we are now encouraging states to restart elective surgeries wherever possible, either statewide or on a county-by-county basis,” Pence said. “We recognize the role elective surgeries play in finances for local hospitals. We will be working with states to enable that.”

A Meaningful Conversation Between James Robison and Pastor Chris Hodges