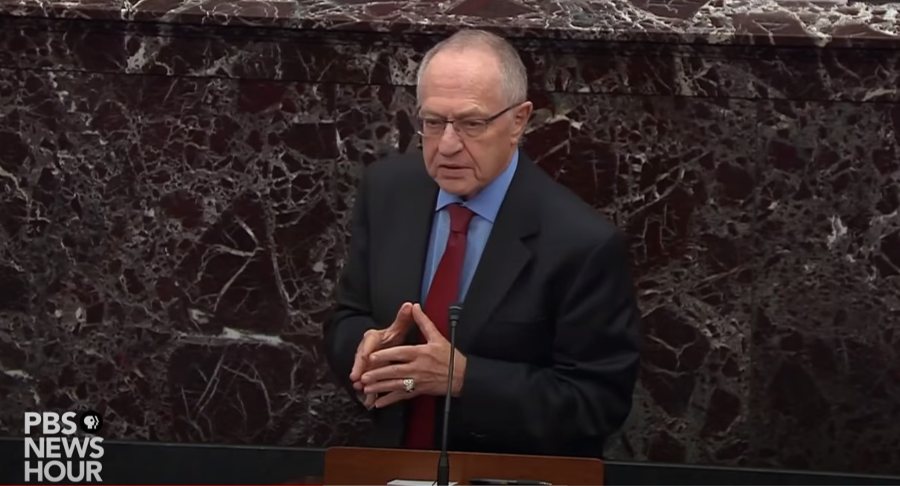 As we reported Wednesday, Alan Dershowitz is working with Mike Lindell, CEO of MyPillow, as a legal advisor to him and his team in his fight against Dominion Voting Systems. Dominion had sued him for $1.3 billion for defamation. MyPillow is fighting back with a $1.6 billion lawsuit against Dominion, claiming that as “an agent of the government” (working under contract to the government to tabulate elections), Dominion is infringing on Lindell’s First Amendment rights when it tries to shut him up. “This may be one of the most critical First Amendment cases in the history of the United States,” Lindell said Monday.

Dominion Is the Government for the Purposes of the First Amendment

That day, in a marathon interview on Lindell’s new channel at FrankSpeech.com (“The Voice Of Free Speech”), Dershowitz described the importance of this suit to First Amendment freedoms. “For the purposes of the lawsuit, Dominion is the nation,” he explained, as the government is using their devices to count our votes. The government, through Dominion’s actions, is not respecting Lindell’s freedom of speech.

Dershowitz compared Dominion’s attempt to shut down speech about the election to the attempts by President John Adams to shut down newspapers that supported Thomas Jefferson in the election of 1800 — even the paper that belonged to Benjamin Franklin’s nephew — with laws called the Alien and Sedition Acts.

With a few exceptions, he said, we have had true freedom of speech since that time. The era in which we now live, however, is one of the most severe attacks on free expression…

He was talking about “cancel culture.”

Our Government’s Liaison With Big Tech

It’s hard to believe our country passed something like the Sedition Act, but I agree with Dershowitz that our current government’s liaison with Big Tech seems to be creating the same sort of environment. (We don’t get jailed, at least so far, but we do get canceled.) According to History.com, the Sedition Act outlawed any “false, scandalous and malicious writing” against Congress or the President, and made it illegal to conspire “to oppose any measure or measures of the government.”

History buffs will enjoy reading about the Sedition Act here.

The All-Important Source Code Would Tell the Tale

This key point emerges from Dershowitz’s argument: Dominion is trying to keep anyone from suggesting that their machines were compromised and involved in election fraud while also preventing anyone from seeing their source code, which would show whether or not those claims are valid. This litigation involves access to the all-important source code. They intend to seek access, and Dershowitz said he believes they’ll be able to look at it.

“I believe we’ll be able to look at those machines,” he said.

It’s as if MyPillow were accused of having a secret poison in its formula that you couldn’t tell by looking at the pillow, and then MyPillow said, ‘We’re not going to give you our formula; we’re going to keep it hidden from you.’ That’s just what they’re attempting. They’re attempting to conceal their behavior while also attempting to discourage you from entering the marketplace of ideas.

In other words, Dominion is trying to have it both ways. They’re using “lawfare” to inhibit anyone from discussing their machines and the possible role they played in election fraud, and at the same time preventing anyone from having access to the source code and doing a forensic analysis that would tell the tale.

Dershowitz said that “you don’t have to be a conservative” to see that what Dominion is doing in threatening the media with litigation — they’re also suing Fox News — is incorrect. He said that Dominion, as “a government actor” is “misusing the power provided to them by the government to censor free speech.”

They’re trying to shut you out of being able to sell your products in stores, he told Lindell. They’re trying to silence you, and they’re doing it as the government of the United States. That’s why I’m in this case.

According to The National Law Journal (a subscription service), Dershowitz is teaming up with another “storied First Amendment attorney,” Nathan Lewin, as well as attorneys from a Minnesota law firm that has previously worked with the firm Clare Locke — which is representing Dominion in this litigation. This is the team that filed the motion on Monday to dismiss Dominion’s lawsuit against Lindell. The Minnesota team also filed the countersuit against Dominion in Minnesota federal court, “alleging the voting company is harassing MyPillow in a McCarthy-esque effort.”

Lewin, 85, goes back to the days of Robert Kennedy’s Justice Department, where he helped prosecute Jimmy Hoffa. He also represented Jody Foster, former attorney general Ed Meese, President Richard Nixon and John Lennon, and I’ll bet you’ve never seen those names together in one sentence before.