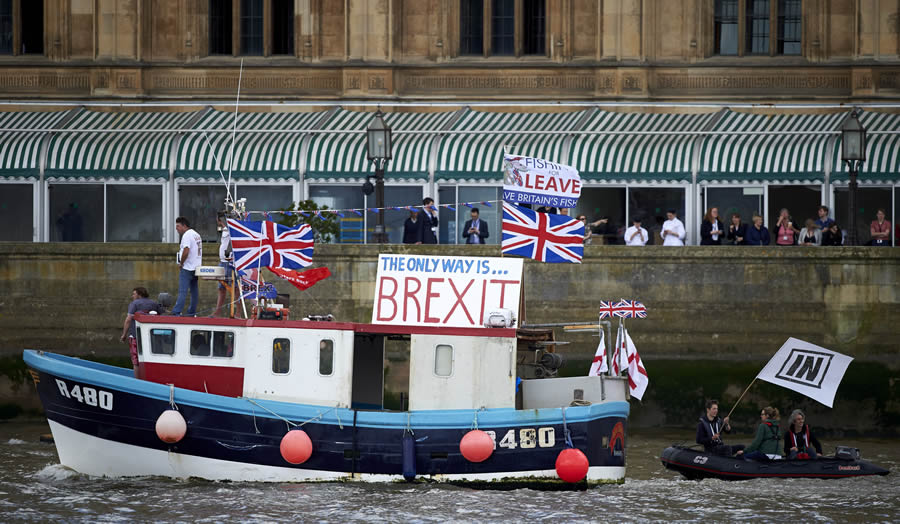 A boat decorated with flags and banners from the 'Fishing for Leave' group that are campaigning for a 'leave' vote in the EU referendum sails by the British Houses of Parliament as part of a 'Brexit flotilla' on the river Thames in London on June 15, 2016.

Britain’s “Leave” camp argues that the deciding issue in the Brexit vote was sovereignty, not immigration. The two issues, though, inevitably will become linked. The continental members of the European Community, especially Germany, are on a slippery slope which will lead to mass absorption of migrants and eventually the free movement of many of those migrants within the European Community. Britain’s interests in the matter of migration differ markedly from Germany’s, and that divergence is the most pressing reason for Britain to leave the EC.

There are many differences between the UK and Germany, but the most important difference is that at present fertility rates the UK will be there at the end of the present century and Germany will not. That does not mean that Germany will disappear: it means that Germany requires many millions of immigrants to compensate for the fact that German women average 1.3 to 1.4 births over their lifetime. The chart below (from UN Population Program data) shows that during the present century, the number of German women in their childbearing years will fall by half to two-thirds, while the number of British women of childbearing age will remain stable or decline about 20%. The UK, in short, can cherry-pick immigrants by whatever criteria it adopts (education, professional qualifications, wealth), the way Australia’s point system does. It has time and leisure to decide what sort of immigration population it needs. Germany needs 5 to 10 million females of childbearing age, which implies an overall immigration of 10 to 20 million individuals. Where will they come from? Most of the immigrants to Germany during the past fifty years have come from Southern and Eastern Europe and Turkey. But those sources are drying up, for southern Europe suffers from fertility rates about the same as Germany’s, and Eastern European fertility is even lower.

In Eastern Europe, the number of women of childbearing age will drop by three-quarters by the end of the present century according to UN projections. Even if Germany wanted more Eastern European immigrants a decade from now it could not find them. The refugee crisis occasioned by the Syrian civil war gave Germany an opportunity to open its doors to mass immigration on humanitarian grounds, while proposing to solve its long-term demographic issues at the same time. I am not accusing the Merkel government of using the refugee crisis as a Trojan Horse for an otherwise unpopular demographic solution. I do not know what Chancellor Merkel and her advisors were thinking. Once the refugees began to arrive, though, Germany’s leaders hailed the migrant wave as a solution to Germany’s long-term demographic problem.

In January the liberal weekly Die Zeit, for example, announced, “Germany becomes young again,” noting that 80% of the migrants were under the age of 35. Whether the migrants have just the skills Germany requires is a different matter, the newspaper conceded, quoting a study by the Rhineland-Westphalia Institute for Economic Research that claimed that “migrants can make a contribution to improvement in Germany’s economic prospects.”

Other German analysts, to be sure, objected that the migrants were neither ready or eager to work, and foresaw more harm than good. Nonetheless, the German elite made a decision to let more than a million migrants into the country, while the experts debated the merits of the plan after the fact. There is a fierce controversy underway in Germany as to the merits of the present migrants, few of whom have the skills Germany requires.

Britain, to be sure, does not at present have to accept any of these migrants: It is not a member of the Schengen Area that establishes unrestricted movement without border controls. But from a British point of view, the migrant invasion of Central Europe has only just begun. As Germany and some of its neighbors face depopulation, they will take in well over 10 million migrants. The Germans cannot afford to be too choosy. The numbers they require are too large, and they will open the floodgates to Middle Eastern and African Muslims. In theory the Germans could recruit Chinese and Indians instead, but that doesn’t seem likely.

Middle Eastern and African immigrants will replace the declining numbers of Western Europeans, and before long will have the rights of free movement that the Bulgarians, Romanians and Poles have. Today’s refugees might become tomorrow’s Germans, and Britain would have no choice under European rules except to open its borders. The British simply do not trust the Germans to take their interests into account.

France is already 10% Muslim by some estimates, and its relative stable demographics probably arise form the higher Muslim birth rate. France is stuck with a demographic transformation that has already passed the point of no return, and Germany is headed in the same direction. Britain, by contrast, has no urgent need for large numbers of immigrants. There is a deep divide between British interests in the matter of immigration and continental interests.

There are many reasons behind Brexit, including the simple desire of the British to govern themselves rather than be governed by unelected bureaucrats in Brussels. But there is a fundamental gap between British and German interests. The European Community, to be sure, could have given the British more leeway to control immigration — which Britain requested and the European Commission refused when the Bulgarian and Romanian flood began two years ago. The fact is the Germans simply cannot be trusted to manage the issues of migration and free movement of people within the European Community.

British demographics are just at the tipping out. The Pew Institute estimates that 4.8% of the British population is Muslim, vs. 7.5% (probably closer to 10%) in France and 5.8% in Germany (now rising substantially).

CNN’s Christiane Amanpour June 30 interviewed MP Daniel Hannan, a prominent member of the “Leave” camp, remonstrating that “the reason people voted, the majority of them, and I can play you what was said, was to stop immigration into this country.” Hannan replied, “What we said is that we would take back control,” and added that immigration levels “should be a question for parliamentary sovereignty.” Strictly speaking, Hannan is correct: Britain wants to keep the sovereign authority to make its own decisions about immigration in the future according to its own requirements, which differ from Germany’s. If other countries decide to grant citizenship (for example) to large numbers of migrants in the future, Britain will have to accept them. If Turkey were to join the European Union, Britain would have to accept any Turks who wish to enter the country, just as it accepted 300,000 Bulgarians and Romanians after 2014.

Republished from the Asia Times with permission.