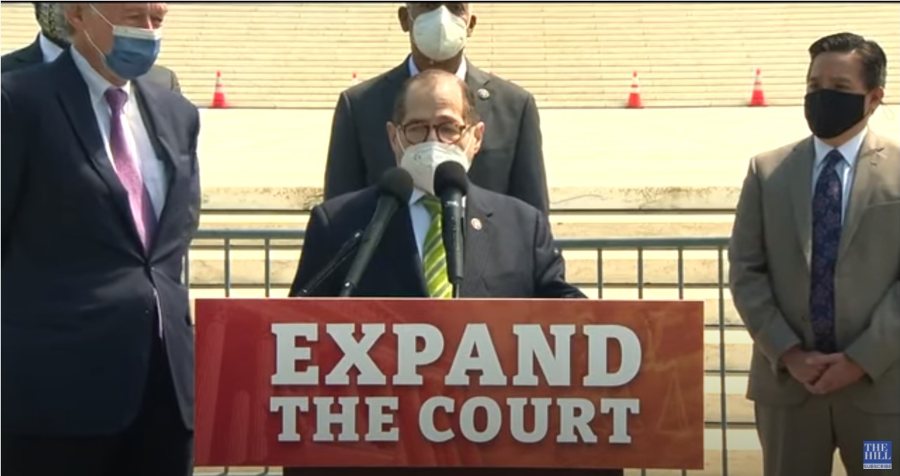 I’m sure that when I predicted during the election that if Democrats took full power by even one vote, they’d soon be trying to force through bills to completely remake America and cement their power forever, some people thought I was being paranoid or overstating the case to fire up the GOP voting base. No, I just know these people.

And so, some Congressional Democrats have gone full-on dictator mode and today  introduced a bill to expand the Supreme Court to 13 Justices. This scheme known as “court-packing” (as usual, they’re trying to redefine the term, but we use words appropriately around here) would let them appoint four more liberal activists to the SCOTUS to outvote the current (occasionally) conservative majority.

This is such a transparent attempt at a power grab and a massive politicization of the SCOTUS that would destroy the public’s faith in its integrity that it was opposed even by fellow Democrats when FDR floated it in the 1930s. Liberal heroine Ruth Bader Ginsburg opposed it, and liberal Justice Stephen Breyer recently spoke out against it. In 1983, then-Senator Joe Biden called it “a boneheaded idea.” That’s back when he could recognize those.

They’re quite open about their nakedly political intent being to stack the Court with liberals to change its rulings.

The bill’s sponsors, Sen. Ed Markey (Mass.), House Judiciary Committee Chairman Jerrold Nadler (NY), Rep. Hank Johnson (GA) and Rep. Mondaire Jones (NY) aren’t even trying to hide behind the fig leaf of claiming the SCOTUS is overburdened and needs more Justices. They’re quite open about their nakedly political intent being to stack the Court with liberals to change its rulings.

Democrats Want SCOTUS To Be An Unelected Super-Legislature

It should be noted that when Trump was appointing Justices such as Amy Coney Barrett, he never said he was looking for conservative activists. He chose judges who respected the Constitution and the original intent of its writers, not those who advocated for their version of what it should say. That’s the opposite of what Nadler and company are seeking. They clearly want to turn the SCOTUS into an unelected super-legislature dominated by leftwing political activists.

In response, six House Republicans introduced a Constitutional Amendment reading, “The Supreme Court shall be composed of not more than nine Justices.” That’s not currently in the Constitution, but it’s been the number for 150 years. They say this would bring stability to the Court and take attempts to expand and pack it for political reasons off the table.

Most Constitutional Amendments are passed by starting with a two-thirds vote of both houses of Congress, and I have no confidence that you could find that many of our current Congress members who would oppose such a terrible and tyrannical idea. There’s also the much rarer route of getting two-thirds of state legislatures to vote to ask Congress to call a national convention, but again, the ball is back in Congress’ court.

A Spine-Chilling Lust for Power

Bottom line: the best way to prevent Congress from attempting to do an end run around the Constitution with abominable ideas like court-packing is to be a lot more careful about who we elect to Congress.

Fortunately, this bill is so over-the-top that it’s given little chance of passing. Even if it got all 50 Democrat votes in the Senate, moderate Democrat Sen. Joe Manchin has already stated that under no circumstances will he vote to end the filibuster, and there’s no way it would get 60 votes.

But it should send a chill up all Americans’ spines to think that we have elevated to power so many people who put their politics and lust for power above their sworn duty to preserve and protect the Constitution that we have ended up dependent on one Senator having the guts to prevent such a shocking assault on the rule of law.

America is still a great and exceptional nation, and one reason is because we are a nation of laws rather than a nation of power-mad men. We need to start appreciating and defending that tradition before we lose it.

After Ginsburg’s Death, a Coup is a Realistic Possibility