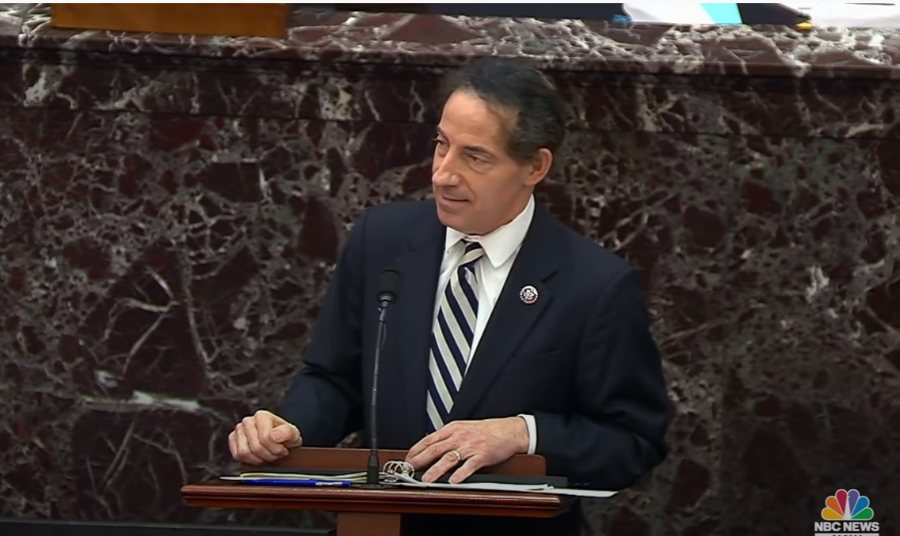 The case brought yesterday by the House impeachment managers was a master class, not in how to present a factual case but how not to — how to avoid the facts and skillfully create a piece of propaganda.

A Look at the “Case”

“What I think is really glaring as the House managers wrapped up their case was what was not in that case,” said legal analyst Jonathan Turley to Sean Hannity on Thursday night.

You know, after doing that snap impeachment, there were four weeks where the House did nothing in terms of locking in testimony. There were a dozen people who were around the President who spoke publicly about things he did or said during those critical hours. The House never called any of them as witnesses, never locked in their testimony, never created the record that they failed to create when they did this snap impeachment. And the question is why?

Instead, Turley pointed out, they quoted news articles about potential witnesses that they never called, either in the impeachment or the “trial.” Very curiously, they chose not to use direct evidence from these witnesses.

He said it was particularly glaring on Wednesday, when the managers repeatedly claimed they had information on Trump’s “state of mind.” That’s not the charge; in the one article of impeachment, Trump is charged with insurrection to violence.

Trump isn’t being charged for being “a lousy person,” Turley said. He was impeached on the charge of trying to incite an actual rebellion. They’ve “dug a very deep hole” that they “didn’t really try” to fill, so why didn’t they bring in their evidence? Even if they wanted to stress Trump’s state of mind, they brought in very little evidence of that.

But we do have a lot of evidence that the breach of the Capitol building was planned well in advance. Trump could not have “incited” an “insurrection” unless he got in a time machine and went back to November/December and told them to do it, or unless he was actively plotting with them at the time. There is no evidence of that, or of the time machine, either.

Turley wrote at length about the House managers’ problem with the lack of direct witness testimony and what it says about the credibility of their case. Highly recommended reading.

So, with Trump’s attorneys presenting their defense on Friday, how should they proceed? Turley said the House managers have “opened the door” to examining “reckless rhetoric,” which they should not want, considering all the horrific examples that can be cited from the Democrats. “It may be difficult to distinguish from the accused, the prosecutors and the jury,” Turley said. “We’re living in an age of rage, and people say irresponsible things.” Oddly, the managers have moved away from the impeachment article they drafted to focus on Trump’s language generally, showing a lot of clips of past speeches. And, according to Turley, “they really didn’t prove that case.”

The way to counter that is, of course, to show a long montage of clips of Democrat senators and representatives using violent and threatening language, of which there are many. Some of them are so dark and chilling, so hateful, they go way beyond anything Trump has said. Try to imagine President Trump saying those things — he wouldn’t.

Turley has said previously that Trump shouldn’t put on a defense at all and just “rest on the constitutional challenge.” Personally, though, I would love to see him “fight” — there’s that word — with some fabulous pushback to devastate and humiliate those who put together this sham. They deserve a good slap-down, and, gosh, I apologize for my use of violent rhetoric. Trump’s attorneys should do this quickly, though, in just a few hours, and not allow the left to continue distracting the country with this show trial.

Much has been said about the 13-minute “movie” that the Democrats had produced and showed on the first day of the “trial,” specifically about the emotional effect it seemed to have on its audience. There were reports that the room went utterly silent at the end of it. This was the centerpiece of the propaganda presented at this “trial.” It would never have been permitted in a real trial, as it was deceptively edited to link Trump’s words to violent actions from different times and places; there was no actual link established. Most importantly, producers chose to leave out the key piece of exculpatory evidence — Trump’s own words, revealing his assumption that the crowd would be going to the Capitol building “peacefully and patriotically.”

That one fact — that in their manipulative little Hollywood production, they conveniently left out the words “peacefully and patriotically” — is enough right there to discredit their entire case. At least to my mind it is.

I can sum it up in two words: “falsifying evidence.”

Alan Dershowitz commented that “the President made a statement, a speech, which was so within the parameters of our First Amendment and Brandenburg [Brandenburg v. Ohio, 1968], notwithstanding the fact that 144 scholars have said it would be unethical — unethical — to even raise a First Amendment issue…” He went on to rail that these people are trying to intimidate Trump’s attorneys from using the First Amendment to defend him. This, he said, would be “depriving all of America and the Senate of the opportunity to hear how the First Amendment precludes this impeachment.”

David Shoen is “a very good lawyer,” Dershowitz said, adding that he expects that Friday we’ll get a few hours of laser-like focus on the First Amendment. (I would add this that might be extremely instructive to the rest of the country, as everyone could use a good lecture on the First Amendment right now.) He said they should also spend some time on the jurisdictional issue — the fact that Trump is now a private citizen — as some senators might acquit more on free speech grounds, others more on jurisdictional grounds. Since only a third of the senators have to vote to acquit, he expects an acquittal.

Neat, Clean, to the Point and Short

“The Democrats overplayed their hand [Thursday],” he said. “They went on too long, [they were] too repetitious, they should have rested…” Trump’s lawyers “will do a good job by making it neat and clean and to the point and short.”

Shoen told reporters on Thursday that Democrats have failed to tie Trump to the breach of the Capitol building. “I think they’re making a movie,” he said. “…And I think it’s offensive. Quite frankly, it’s antithetical [to] to the healing process to continue to show the tragedy that happened here that Donald Trump has condemned, and I think it tears at the American people, quite frankly.”

It sure does. And to the Democrats, tearing at us is an extra benefit of this sideshow. It’s just one more way to go after Trump supporters, one more way to make us feel crushed and defeated. But it will backfire, because we’re smarter than that, we can see through them, and we can spot all the fakery and the strings being pulled.