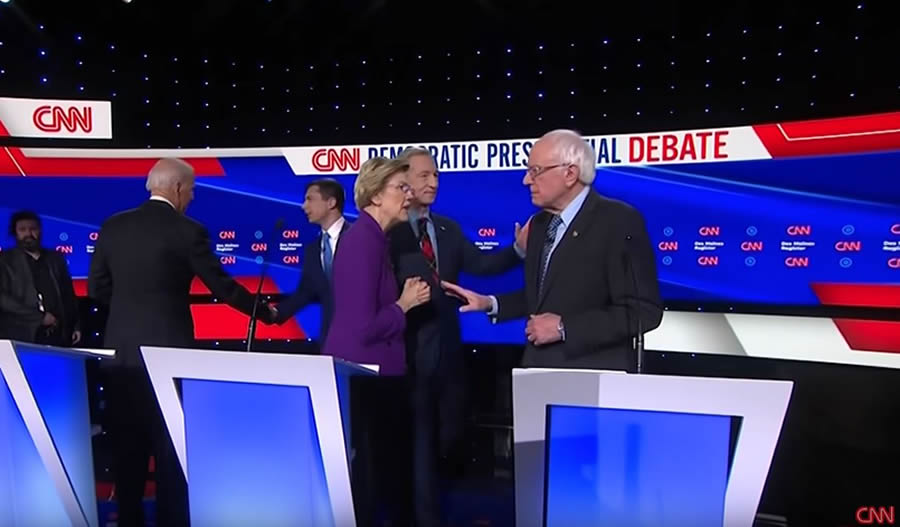 I’m almost as upset that Democratic presidential candidates are squabbling as I am that Prince Harry and the former Meghan Markle apparently don’t want to live in Los Angeles until President Donald Trump leaves office. Double bummer.

Speaking of doubles, did you know that Sens. Elizabeth Warren and Bernie Sanders have accused each other of lying? How can this be? Progressives don’t lie. With that in mind, one of them must be lying.

After last Tuesday night’s Democratic presidential debate, Warren and Sanders were noticed in an apparently heated exchange, and CNN later released the audio of the intra-socialist spat.

Word on the street, and on the ubiquitous mainstream media outlets that regularly present old stories as breaking news, is that in a December 2018 meeting, Sanders told Warren he didn’t believe a woman could win a presidential election. How can this be? Progressives can’t be sexist.

CNN’s nonbiased, objective, fact-hunting, truth-seeking professional journalist Abby Phillip pseudo innocently asked sexist Sanders during the debate: “So, Sen. Sanders, I do want to be clear here: You’re saying that you never told Sen. Warren that a woman could not win the election.” Sanders was probably thinking, “Where did that come from?” — especially if he never said it, which we have to assume, since progressives cannot lie.

Sanders predictably replied, “That is correct,” at which point Warren must have been furious because she knew he was lying — except she also must have been conflicted knowing that progressives don’t lie.

Then Phillip turned to Warren and asked, “Sen. Warren, what did you think when Sen. Sanders told you a woman could not win the election?”

You might be thinking, “Wait, how can Phillip assume a fact not in evidence — that Warren’s version of the 2018 meeting is presumptively true and Sanders’ isn’t?” But if you are the least bit enlightened, you would then have to catch yourself and broom such a wicked thought from your mind because you know CNN doesn’t employ biased and palpably unfair reporters.

Characteristically mild-mannered law professor Jonathan Turley was uncharacteristically outraged by CNN’s taking sides. He tweeted: “CNN has long been viewed as anti-Sanders, but this is incredible. After asking Sanders to repeat his denial, Abby Phillips asserted that Sanders was lying: ‘Senator Warren, what did you think when Senator Sanders told you a woman could not win the election?'”

Now fast-forward to the post-debate stage when Warren and Sanders stood before each other like passive progressive warriors, ready to accuse each other of dissembling.

Warren drew first blood, saying to Sanders, “I think you called me a liar on national TV.”

The ordinarily garrulous Sanders laconically replied, “What?” Warren then repeated the accusation verbatim, which is pretty impressive considering the emotion that must have been coursing through her blue-state veins. The sometimes-truculent Sanders showed unusual restraint and said, “You know, let’s not do it right now” — which would be disturbing if we didn’t understand the context.

Admittedly, I’m a little disappointed in Bernie, who should have said, “Yes, it was either call you a liar or call myself one, and I’m going to have to go with me. I hope you understand.” But he didn’t, which makes me think I should find myself another favorite socialist.

So, what are we to make of all this? Who do you think might be fibbing?

I’m going to have to go with Fauxcahontas, because she has built her career on prevarication, and because her allegation doesn’t ring true. I acknowledge the possibility that Sanders could be slipping, but he surely remembers that Hillary Clinton won the popular vote against Donald Trump — and in the Electoral College-hating progressive world, this means she won the election. Plus, I just think Sanders is more authentic than Warren. After all, he proudly wears his socialism, and Warren denies hers in the same breath she unveils her blatantly socialistic programs.

This car wreck of a Democratic primary campaign just keeps getting messier. The Democratic base desperately wants one of its own, but supposedly centrist (which is laughable, by the way) former Vice President Joe Biden still looks strong, as does supposedly centrist (even more laughable) Mayor Pete Buttigieg. Meanwhile, Democratic congressional newcomers are turning away from the leftist Squad. The Squad leader, Rep. Alexandria Ocasio-Cortez, is losing her mojo, and some believe House Speaker Nancy Pelosi slow-walked the impeachment articles to ensure that Biden would have an advantage on the campaign trail while some of his main rivals sit as unbiased progressive jurors in the Senate impeachment trial.

I would end this column with a suggestion that we get some popcorn and watch this play out, but since I did that in a previous column, how about some nachos instead?