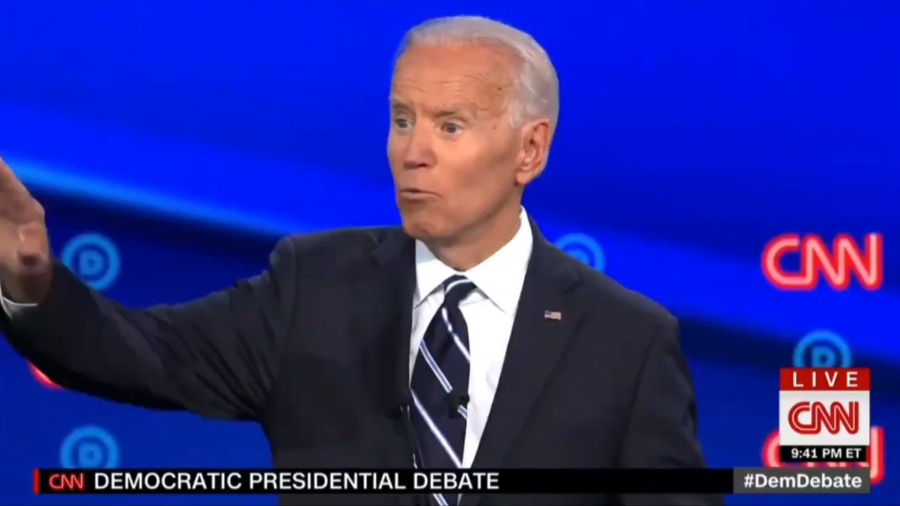 What could better illustrate the floundering chaos of the Democratic Party than a new national poll showing Joe Biden as the clear front-runner? The party’s got nothing else besides this fumbling faux pas factory.

You know the base doesn’t want Biden, yet he’s leading the party’s polls.

Sen. Kamala Harris decided to challenge Biden in the first round of Democratic presidential primary debates in June, and for a second it appeared to work, as her poll numbers surged, largely at Biden’s expense. But the latest CNN survey shows Harris dropping by 12 points to just 5 percent support and Biden up seven points to 29 percent, comfortably ahead of the pack. The CNN poll is no outlier, as the latest Fox News poll shows Biden at 31 percent. There are just so many empty suits among the field that Biden, despite his abundant weaknesses, remains ahead.

Indeed, the CNN poll shows that Biden has twice as much support as his closest challengers, Sen. Bernie Sanders at 15 percent, and Sen. Elizabeth Warren at 14 percent. The rest of the candidates are in the low- to mid-single digits. If the party has any sense, it might take a hard look at Rep. Tulsi Gabbard, who seems far more impressive and authentic than the others — and less radical, which might explain why she only has 2 percent support.

Imagine the predicament Democrats are in. From their perspective, they have an ideal situation. They think they are running against a blundering, loud-mouthed, racist fool whose only support is among racists, rubes and rednecks. They think the best way to beat Trump is to run a candidate who offers the starkest contrast with him. Yet their leading horse is a blundering, loud-mouthed buffoon who has a long history of racially insensitive remarks.

Trump is a loose cannon on Twitter? Well, Biden is a loose cannon everywhere, especially when he opens his mouth. The Washington Examiner just highlighted six examples in which Biden just flat-out made things up to embellish his record, from tales of his helicopter being forced down near Osama bin Laden’s hideout in Afghanistan, to fables of his ancestors working in the coal mines.

The spooky thing is that these yarns and countless others are not merely gaffes but gratuitous, unforced errors. In every instance, Biden was trying to make himself look more impressive, courageous and noble than he is. It would be bad enough if Biden were trying to hoodwink us, but it seems that he might be a real-life Walter Mitty, actually believing these things happened.

Even when Biden’s weird statements aren’t in the category of puffery, such as his statement that “poor kids are as bright … as white kids,” they reveal that he is a knee-jerk bigot, the exact opposite image Democrats seek in their candidate to maximize their ongoing slander that Trump is a racist.

Democrats want a candidate who will appear mature, stable and sane to highlight Trump’s alleged instability. But the two guys approaching Trump in age are Biden and Sanders, and, well — you get the point. And most of the others are brash extremists bereft of any semblance of realism.

MSNBC’s Joe Scarborough is clinging to yet another fantasy: that Biden is conveying a positive, uplifting, “almost Reaganesque” message. Sorry, Joe, but Trump’s record is the most conservative of any other president’s since Reagan, and he is as optimistic and bullish on America’s future as any political leader in decades.

Hopefully, Scarborough’s delusion is shared by his fellow progressives. Not only are Trump and his supporters positive and optimistic about America’s future; grassroots Democrats are also mired in the worst kind of negativity and anti-Americanism we’ve seen since the Vietnam War days. How does Scarborough think an uplifting message will appeal to malcontents?

I’m aware of all the polling that shows Democratic candidates can beat President Trump, but color me an unbeliever. Democrats will not only have to find a viable candidate to run against Trump and his stellar record, though such a human has yet to surface for them; they’re also going to have to reconcile the deep disconnect between their idea of a winning candidate and the makeup of the Democratic base. Their goal is to contrast their candidate with Trump, but so far they are only showing the contrast between their front-runner and their rabid base. How will they ever square that circle?