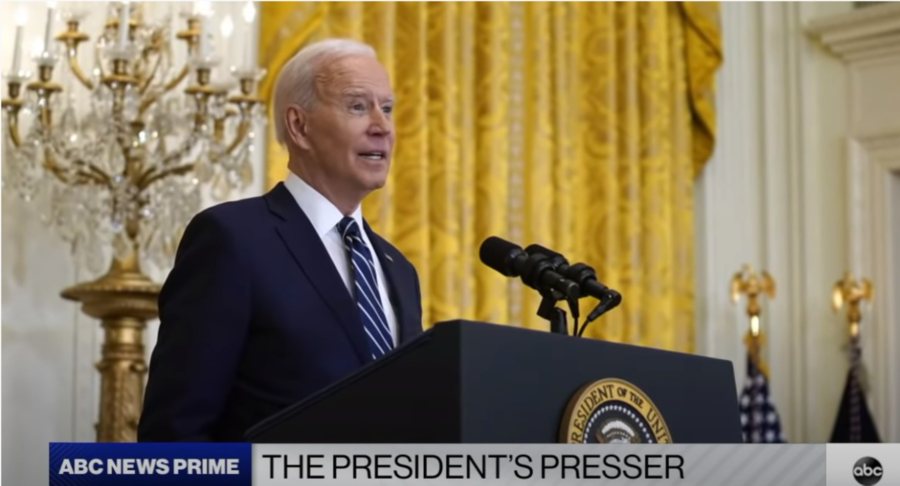 The idea that I’m gonna say — which I would never do — if an unaccompanied child ends up at the border, we’re just gonna let ‘em starve to death and stay on the other side, no previous administration did that either. EXCEPT TRUMP [emphasis mine]. I’m not gonna do it.

Ah, so President Trump left children to stay on the other side to “starve to death,” did he? That’s a lie, but c’mon man, it’s good old Uncle Joe talking here, our “decent” (his own word), moral president during his cringeworthy, totally orchestrated press conference on Thursday. Biden went on to say that Trump’s programs “have an incredibly negative impact on law — international law, as well as on human dignity.”

Well, look, I guess I should be flattered people are coming because I’m the nice guy, that’s the reason why it’s happening, that I’m a decent man, or however it’s phrased…

We’ll get to Biden’s huge inaccuracies later, but first, I’d like to address Biden’s own record of decency and niceness, since he and his supporters talk about him so often in that light. I’m sure I speak for many who have had enough of this.

There’s an email going around about Biden’s role in the evacuation of Vietnam in 1975, when he was a freshman senator. Of course, with emails like this, it’s important to go back to the source material, if it’s cited, and determine the accuracy of the claims before just forwarding them. (That’s particularly true if they’re fundraising emails.) So that’s what my research staff did with this one.

It talks specifically about Biden’s opposition to a relief package to help in the humanitarian evacuation of Saigon (which did manage to save 1,500 South Vietnamese allies who, if they’d been left behind, would have been slaughtered along with thousands of others by the North Vietnamese). The claims are based on passages in the 2018 book When the Center Held, by President Ford’s Secretary of Defense Donald Rumsfeld.

The email also says that Biden, a member of the Senate Foreign Relations Committee, “torpedoed any support” for these refugees once they came to America.

Checking Rumsfeld’s book, we found a passage about the effort by President Gerald Ford to protect the most vulnerable as Vietnam evolved from a military to a rescue operation. There were about 6,000 Americans still in and around Saigon, plus our South Vietnamese allies. “It was a race against the clock to save lives,” Rumsfeld wrote. “President Ford was committed to evacuating Americans” and also “the South Vietnamese who had assisted us and to whom the US had ‘a moral commitment.’”

“Meeting with an influential group of senators,” Rumsfeld wrote, “Ford repeatedly tried to sway them with what he believed deeply was our country’s moral responsibility to help refugees fleeing persecution. Repeatedly, a number of Senate Democrats dissented, including the young outspoken Senator Joe Biden (D-DE).”

On page 163, Rumsfeld reprints his contemporaneous notes. “Meeting with the President, April 14, 1975: …Senator Biden of Delaware then spoke up and got back again on the delays in getting Americans out. He also expressed hostility towards the idea of bringing out any South Vietnamese.”

So, our “Mr. Decent” when it comes to asylum-seekers was one of those who expressed “hostility” to the idea of welcoming South Vietnamese refugees who had helped us in the war?

Even Snopes.com, while rating the email claims as “mostly false” after giving Biden every conceivable benefit of the doubt, finds this true: “Rumsfeld says in his book that then-President Gerald Ford tried to convince a number of senators to help refugees and claims Biden, along with other Democrats, ‘dissented.’ Biden did vote against sending financial assistance to the South Vietnamese government toward the end of the conflict. In the end, he did not block the admittance of refugees.”

Well, wasn’t that nice of him? Actually, reading the entire Snopes.com fact-check gives the impression that Biden gummed up the works when he could have facilitated the government’s assistance to asylum-seekers.

According to Rumsfeld, Biden “expressed hostility” to the idea of allowing the refugees, when time was of the essence. The aid package died on the House floor. Later on — after Saigon fell — he apparently came around on the issue.

If it seems harsh to hold someone accountable for what he said in 1975, be assured that any conservative would be held to an even stricter standard. Biden apparently was not eager to welcome immigrants from South Vietnam who had helped us there, our allies who desperately needed political asylum and would otherwise be killed. How moral and decent.

Biden is not “nice.” We could cite numerous other examples of Biden’s lack of civility and common decency. Here’s just one.

Of course, none of the reporters chosen to participate in Thursday’s press conference challenged President Biden’s lies about Trump’s border policy. Stephen Miller tweeted out real-time about it, though:

Biden replied w/ an asinine false choice. He explained that he was resettling minors in the US in lieu of ‘let[ting] them starve to death and stay on the other side’ (Mexico) which he accused Trump of doing. This is spectacularly false and a grave smear on our border agents.

First off, illegal crossers returned to Mexico are transferred to migration authorities not the desert. But unaccompanied minors were returned to their ‘home countries’ to be reunited with their own families. They were not returned to Mexico unless Mexico was their home. This humane policy from President Trump brought unaccompanied minor numbers to record lows. Biden’s disastrous decision to exempt minors from Title 42 [which allows for expulsion], and to stop the at-home reunification process in favor of domestic resettlement single-handedly created this crisis.

Biden Terminated the Reunification Policy of the Trump Administration

Miller later appeared on “FOX News Primetime” with Brian Kilmeade, saying, “What Joe Biden said at that press conference was a detestable lie,” and also that it was their policy to “rescue unaccompanied minors and get them safely home.”

He said that, for example, if a 16-year-old from Honduras came across unaccompanied, they’d be processed by Border Patrol, put on a chartered flight, “paid for by the US government” and flown back to Honduras, where they’d be met by social services. Our own State Department would work to reunite that young person with family.

See the whole interview; Kilmeade and Miller also have a good discussion of voter ID as it relates to civil rights.

And since we think President Trump deserves the last word, here’s his response, from Thursday night’s “The Ingraham Angle.”