Debunking AOC’s Met Gala Claims About Taxes and ‘The Rich’

AOC’s messaging about taxing "the rich" has some conspicuous problems. 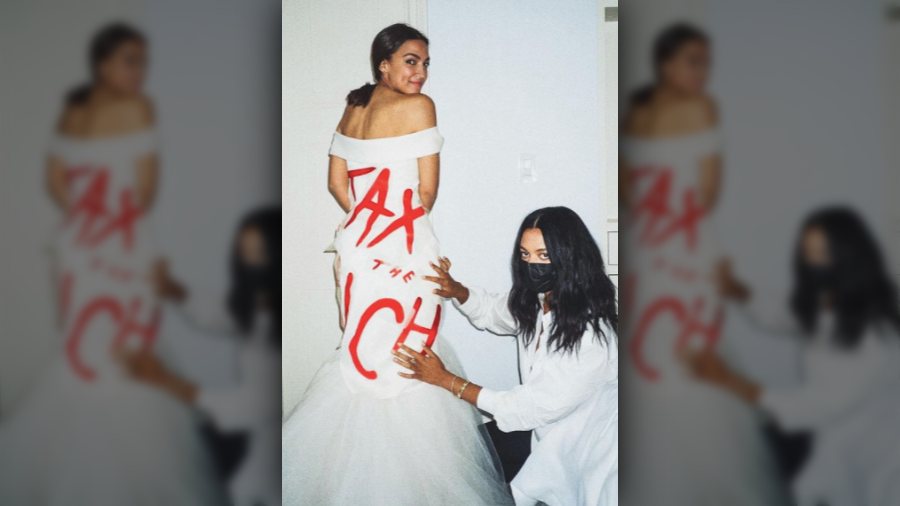 Last week, the annual Met Gala was held in New York City. Among all the eye-catching looks of the night, the dress worn by Rep. Alexandria Ocasio-Cortez, with the words “Tax the Rich” written across the back, may have stirred up the most conversation — and controversy.

Many social media users pointed out AOC’s apparent hypocrisy. To wear a dress slamming “the rich” — I put it in scare quotes because it is such a vague term — while attending an event where a single ticket costs over $30,000, is an inconsistency to say the least.

AOC’s messaging about taxing the rich comes with the implication that somebody else — whether it be the government or another citizen — is entitled to the money that a successful person earned.

But while much focus has been placed on the juxtaposition between AOC’s dress and the event she was wearing it at, noticeably less attention has been paid to addressing the substantive claim she is making: namely, that the rich do not pay their “fair share” of taxes.

Do The Rich Pay Their “Fair Share” of Taxes?

The short answer is, yes, they do — by any objective measure, at least.

Using IRS statistics, the Heritage Foundation put together this helpful graphic which pretty easily debunks the myth that the top earners essentially don’t pay taxes while the average American foots the bill. People such as Bernie Sanders, AOC, Elizabeth Warren, and others have basically built their entire brands off of this misleading idea. 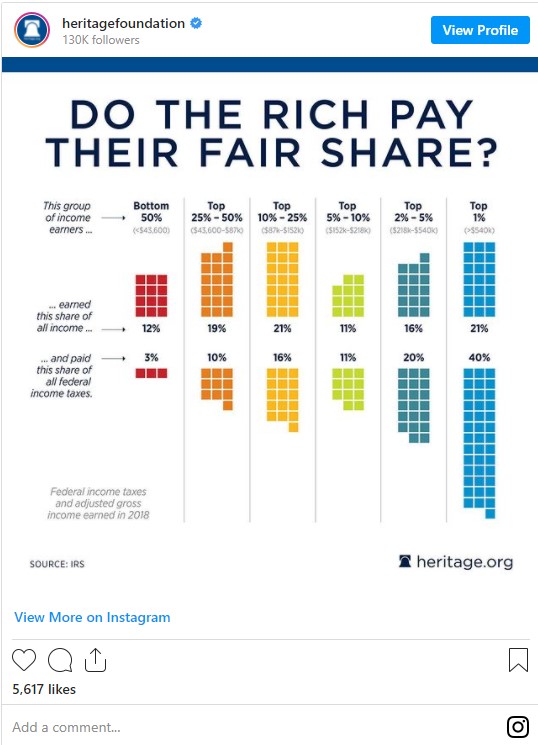 On the other hand, while those in the bottom 50% of earners accounted for 12% of total income, they only paid 3% of all taxes. This is not to say that we should increase taxes on those with low incomes — we shouldn’t, as they deserve to keep their hard-earned money — but rather it is to point out that who AOC and others term “the rich” are already shouldering nearly the entire tax burden of the country.

The U.S. has one of the most progressive tax systems in the world. This means that the higher one’s income, the greater percentage of it they pay in taxes. Our top tax bracket only applies to those making 9.3 times the national average income. By comparison, the top tax rate in Denmark — a country that people such as AOC and Bernie Sanders would like the U.S. to emulate — applies to anyone making 1.3 times the national income. The way Denmark collects enough tax money to fund their welfare state is not through taxing “the rich,” but rather by taxing the middle class. The U.S., on the other hand, already has a tax system that concentrates the highest rates on its highest earners.

Why Begrudge “The Rich”?

Progressives argue that even though the rich may outpay their percentage of total income in taxes, raising them is still a moral imperative because the income was most likely gained through exploitation. Thus taxing their income at very high rates — maybe even at 70%, as AOC has suggested — is only fair. This sentiment is most often targeted at business owners.

But this anger is misdirected. Business owners — both small and large — are the backbone of this country. We not only rely on them for access to high-quality, affordable, goods, but we also rely on their entrepreneurial drive for all kinds of innovation. Most people can agree that we need people to start businesses in order to have a functioning, innovative, and prosperous country.

The issue is that to start a business is a huge financial risk — not only because it takes a lot of time and money to start one, but also because most don’t succeed. Twenty percent of business startups fail within one year, and only one-third are still operating after 10 years.

The only way to convince someone to take such a significant risk with such a high likelihood of failure is if there is an upside to it. Namely, if there is the possibility that they will become more financially successful through that business than they ever could have by continuing to work as an employee, which is much less risky.

Not everyone will decide that is a risk they are willing to take; in fact, most people decide it is better if they don’t take it. That is a completely understandable decision. However, that does not mean those who do take that leap of faith in order to — among other things — try to provide a better life for their families, should be begrudged.

As long as all the agreements that a given firm made were voluntary for all parties involved, there is nothing inherently immoral about it.

The great economist Thomas Sowell wrote that “Envy was once considered to be one of the seven deadly sins before it became one of the most admired virtues under its new name, ‘social justice.’”

While, on its face, this quote appears to just be a clever turn-of-phrase about progressivism, it actually provides valuable insight.

AOC’s messaging about taxing the rich comes with the implication that somebody else — whether it be the government or another citizen — is entitled to the money that a successful person earned. This is what “social justice” is when applied to an economic context.

But it is important to note that “social justice” is not the same as actual justice. In an economic context, true justice would be respect for what each person has ethically earned in a system of voluntary exchange. Further, it is respect for each individual’s rights, choices, and property.

In fact, redistribution on the basis of rhetoric about “social justice” is the exact opposite of what true justice would require. Sowell was correct when he asked, “what is your ‘fair share’ of what someone else has worked for?”

Jack Elbaum is a Hazlitt Writing Fellow at FEE and an incoming sophomore at George Washington University. His writing has been featured in The Wall Street Journal, Newsweek, The New York Post, and the Washington Examiner. You can contact him at [email protected] and follow him on Twitter @Jack_Elbaum.