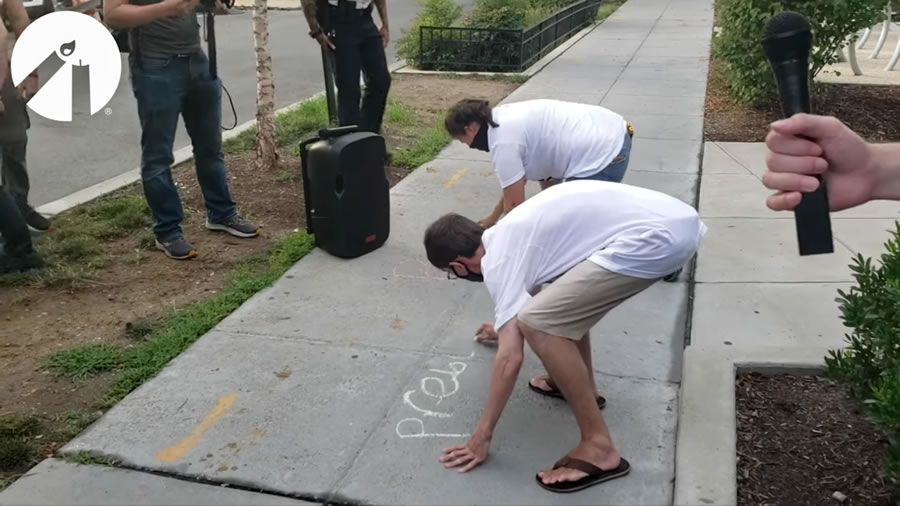 In this screengrab from video, two students are seen writing on a sidewalk with chalk shortly before being arrested by police officers on Aug. 1, 2020, in Washington, D.C.

Pro-life groups are suing D.C. Mayor Muriel Bowser over the arrests of advocates who wrote “Black Preborn Lives Matter” in chalk on the sidewalk.

The Alliance Defending Freedom filed a lawsuit this week on behalf of the Frederick Douglass Foundation and Students for Life against Bowser and the District of Columbia following the August arrests of two Students for Life members.

“The Plaintiffs were prohibited from communicating their message, even though other messages are now permanently emblazoned along the streets of the District in a nearly identical format,” the lawsuit said. “The only difference between the Plaintiffs’ desired mural and the other permitted — and permanent — murals is the content of the message.”

The Metropolitan Police Department (MPD) arrested both 29-year-old Warner DePriest and 22-year-old Erica Caporaletti on an early August Saturday morning for chalking pro-life sentiments, including the slogan “Black Preborn Lives Matter,” on the road in front of a Planned Parenthood abortion clinic.

“City officials were not content to stop a message in temporary paint,” Students for Life of America President Kristan Hawkins said in a statement.

“Two students were arrested trying to express in chalk what they were not allowed to say in paint,” she continued. “That kind of viewpoint discrimination cannot be allowed to continue unchallenged.”

“The government can’t discriminate against certain viewpoints by allowing some voices to be heard while silencing others,” ADF Legal Counsel Elissa Graves said in a statement.

She continued: “Because of the city’s actions, Frederick Douglass Foundation and Students for Life of America weren’t able to participate in the public square as other groups have. The First Amendment prohibits the government from picking and choosing whose speech to allow.”

Bowser’s office declined to comment on the litigation to the Daily Caller News Foundation.

Attorney Harmeet Kaur Dhillon, who is the CEO of the Center for American Liberty, previously told the DCNF that the disparity in treatment in these cases is “obviously viewpoint discrimination.”

“I think it’s going to become clear as legal proceedings, which are probably inevitable, proceed on this matter that the city and it’s law enforcement have violated clearly established First Amendment precedent that bars treating similarly situated circumstances of free speech differently,” Dhillon told the DCNF in August.