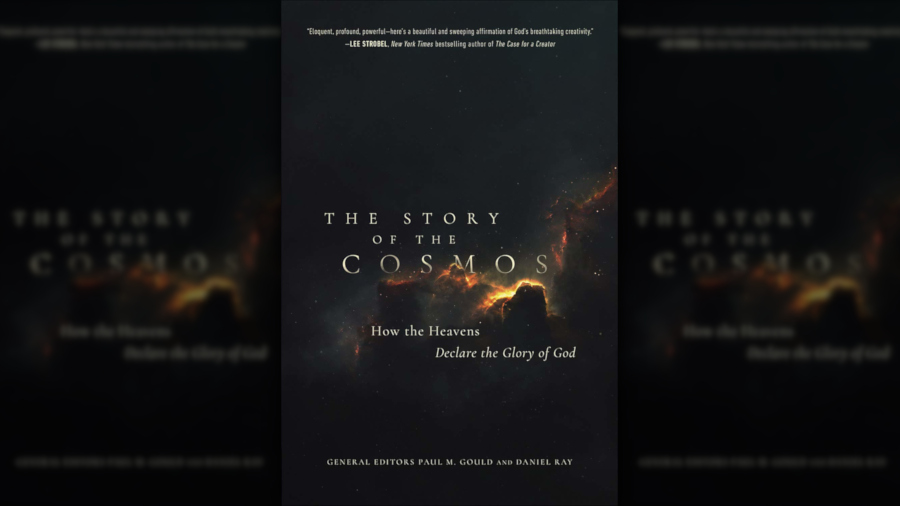 By Christopher Reese Published on September 7, 2019 •

Daniel Ray and Paul Gould are general editors of, and contributors to, the recently released volume The Story of the Cosmos: How the Heavens Declare the Glory of God. The book looks at the cosmos through the lenses of science, literature, theology and other disciplines. Chris Reese had the opportunity to ask Daniel several questions for Worldview Bulletin about the book, and the topic of Christianity and science in general.

Worldview Bulletin: Daniel, thanks for taking time to talk about The Story of the Cosmos. Please tell us a little about yourself and how this project came about.

Daniel Ray: Thank you for having me! I became interested in Christian apologetics through Ken Myers and the Mars Hill Audio Journal (on cassettes in the late 90s). I had a closet apologetics interest for years. In 2014, I left the classroom and decided to formalize my lay interest and completed a master’s in apologetics from Houston Baptist University in 2016. I wrote my thesis with Dr. Michael Ward on the topic of C.S. Lewis’s cosmological vision in The Chronicles of Narnia. Michael asked me what should be done with Lewis’s vision. So I put together an event we called “Astrophysics & Fantasy — Hubble Meets Narnia.” We brought together Michael’s expertise on Lewis and the insights of a veteran Hubble astrophysicist (himself a believer) in one evening at Southwestern Baptist Theological Seminary in Ft. Worth. It was well-attended and well-received. That’s how and where I met Paul Gould. It was his idea we do a book out of the event.

WB: Why is the relationship between Christianity and science such an important topic in our day?

Ray: For the last five years or so, I’ve been personally engaged on a variety of levels with skeptics and atheists. Reading the books, appearing as a guest on atheist podcasts, watching debates both live and on video, and the one thing that comes up over and over again is “science.” It is, in my estimation, a broadly-defined, catch-all surrogate, both spiritually and epistemologically, for the ardent skeptic looking for foundational authority to which he may appeal for his claims about the nature of man and the universe. “Science” has become the dominant cultural authority of our time, but as you know, it’s a rather myopic way of interpreting the sum total of reality and our existence. It’s just not capable of being an all-encompassing epistemology.

In a Sunday school class I recently asked adults what a star was. Everyone who responded began with the scientific nomenclature — gas, dust, plasma, nuclear fusion, etc. I used that as an example of just how prevalent a “scientific” understanding of ourselves and of creation has become. The church needs to recapture the uniqueness of her voice once more. Theology is the queen, and science is but her handmaiden. We need to remind ourselves of this as well as engage those who appeal authoritatively to science as an attempt to denigrate theological discourse.

WB: What new insights did you gain on these issues after working on this volume?

Ray: Great question. It was a reminder to me that the medievals were right about one thing. Though life on earth, below the moon, the sublunar realm, was far from perfect, theirs was a cosmology in which everything had its place. That’s not to say they had the science of the heavens correct, but that in their conceptual models, there was a direct link between the heavens and the earth. Of course that linkage led to all kinds of specious speculations and conclusions, but as C.S. Lewis points out in The Discarded Image (in summary) there was an aesthetic elegance to their model that connected man and God and the cosmos into a coherent narrative.

In our day and age of niche specialization, we are still suffering from what chemist C.P. Snow observed in the middle of the twentieth century, that the modern “university” departments don’t talk to each other. Add in our tendency to reduce things to the subatomic realms and we’ve lost our ability to be “well-informed generalists” as Ken Myers has said, and see the bigger picture, the interdisciplinary nature of the heavens and the earth as they hold together in Christ. There is no “one truth” no “uni veritas” on the modern campus today. This project renewed my hope that both an ecumenical and interdisciplinary approach to the cosmos and our place within it can be restored for the glory of God.

WB: What do you think is the best way to approach a skeptic who believes science and Christianity are in opposition?

Ray: Patience, face-to-face dialogue, relationships, living by example, living by faith in the fact that, by faith, we know the universe was created by the Word of God. We have to live out our ministries with deliberate incarnation. That means experiencing nature, getting out underneath dark skies, delighting in creation, stirring up that sense of wonder and transcendence, but that is best done in person. Jesus tells us to “Go” — He addresses the whole person with all authority in the heavens and on earth. Get out there and engage. Michael Ward mentions in his chapter in our book how we’ve come to be satisfied with images and pictures of the universe rather than encountering the real thing in person. There’s nothing wrong with pictures or images, but whether they be pictures or images of stars or of people, there is nothing like a personal encounter.

The universe doesn’t neatly fit into a syllogism, and rational abstractions about the cosmos, while they do have their place, have come to supplement our personal encounter with the magnificence and beauty of the cosmos. We have to unpack the universe from Kalam and set it free to work its ancient wonders once more. We have to, in Paul Gould’s words from his chapter, re-enchant the cosmos. Our models of the universe, Lewis says, affect how we see both the universe and our place within it. We have to “re-incarnate” or “resurrect” our engagement with nature and with skeptics. Keep the logical abstractions for discussions, sure, but let’s be more proactive with person-to-person interactions.

Ray: Yes, absolutely. I know here in Texas there are local chapters for Reasonable Faith, Ratio Christi, Reasons to Believe, some meet in churches others meet on campuses throughout the state. But it’s not just Texas. I believe many of these chapters are nationwide. And even if they meet on a campus, most of them are open to anyone interested in the apologetic dialogue. I am a part of three apologetics groups on Facebook, for example. Social media is a great way to find local meet-up groups and get connected to people who meet in person.

On the literary front, there are so many invaluable resources you can find out there. For starters, C.S. Lewis’s The Discarded Image, which details the vision of the medieval cosmological vision, Michael Ward’s Planet Narnia for a more detailed and imaginative look at Lewis’s love of medieval cosmology, Guillermo Gonzalez’s The Privileged Planet, John North’s Cosmos, David C. Lindberg’s The Beginnings of Western Science, and an anthology on writings pertaining to the cosmos edited by Dennis Daniels called The Book of the Cosmos. Alister McGrath also has written a wonderful and accessible book titled Science and Religion: A New Introduction.

There is an excellent but older series of books on the intersection of science and Christian theology by Thomas F. Torrance, who is quoted by Melissa Cain Travis in her chapter. Also, if you’re wanting a good resource for astronomy basics and finding dark-sky areas near you, as well as learning about how to reduce light pollution in your area, a friend of mine runs savingourstars.org and is well worth a visit — all free resources for getting started with stargazing. Lastly, I recommend for stargazing beginners Stellarium.org, a free and easy-to-use software program for finding and learning star names and constellations.

WB: The Story of the Cosmos is a beautiful volume, with glossy paper and a number of photographs and diagrams. Was this aspect of the design something that you all were intentional about?

Ray: Indeed. We credit the team at Harvest House for this. They had a dedicated vision for making the visual aspect of the book come alive. One of our contributors, Terry Glaspey, is an art historian, but Terry was also our project manager at Harvest House! He liked the idea of the book so much he’d asked us if he could contribute a chapter on the heavens’ influence in art. How could we say no? So between Terry and his team, they were passionate from the beginning to make sure this book had a professional and wonder-stirring visual appeal. Paul and I hand-selected most of the images for the book and our contributors also provided some as well. But we all agreed that a book about the cosmos had to be visually appealing. The cover by itself turned out to be rather stunning. The beauty of the cover is one of the first comments I hear from people about the book.

Watch the video trailer of The Story of the Cosmos below, and go here for an exclusive download of chapter 12, “The Cosmic Coincidences of Fine Tuning,” by Luke Barnes and Allen Hainline. Find the book at Amazon, Harvest House (the publisher), or most any online bookseller.

Originally published on The Worldview Bulletin Newsletter. Reprinted with permission.