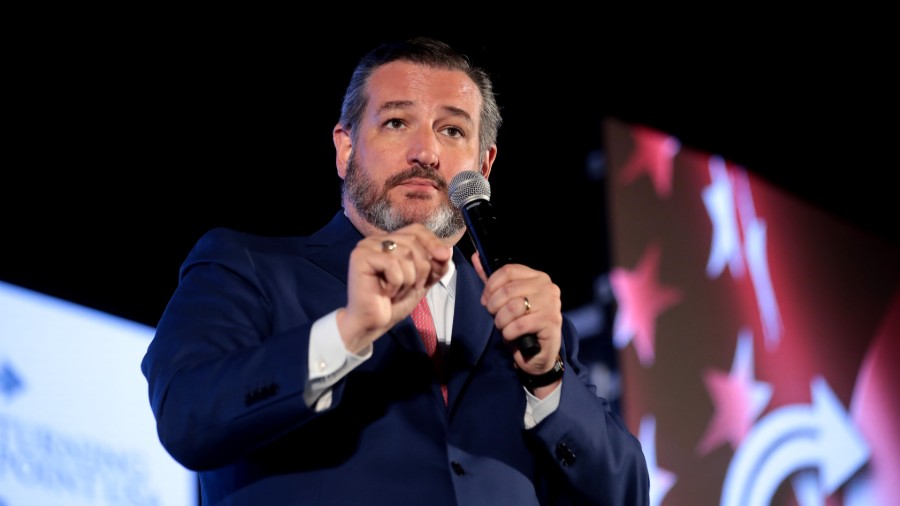 What they didn’t tell you is Barack Obama built those cages. And today, under Joe Biden, the cages are bigger, and they’re more full than they were before. Mr. President, every Democrat who stood up and lamented kids in cages — in the House of Representatives, Rep. [Alexandria] Ocasio-Cortez has a famous photo of her grasping her head by the kids in cages.

Well, I’m going to give a simple challenge for Rep. Ocasio-Cortez and for every Democrat in this body, go see the Biden cages with your own eyes.

Sen. Ted Cruz Challenges AOC and other Democrats to visit the “Biden Cages” at the border pic.twitter.com/japO5gGGOa

I’ve seen them, the Donna tent facility [in Texas], with over 4,000 people, with little boys and little girls on top of each other.

Just a couple of weeks ago, when I was in the Rio Grande Valley, the rate of COVID positivity in the Biden cages was over 22%. And all the Democrats who talked about this — if they don’t go, if they don’t denounce the Biden cages, then they’re telling you that they’re hypocrites, that they didn’t believe it when they said it, that they didn’t care about it when they said it, that it was all politics, it wasn’t about their kids.

Anyone want to know what Joe Biden’s favorite ice cream flavor is? That’s the news. Never mind 1.2 million illegal immigrants. Never mind, when I took 19 senators down to the border, we went out on the river and saw a man floating dead in the river who died trying to cross illegally.

Brooks County, over and over and over again, there [are] dead bodies of illegal immigrants. The traffickers who are bringing them in, they’re not nice guys. They’re not humanitarians. They don’t give a damn. That means if one of the illegal immigrants is a pregnant woman, is a young child, is elderly, is sick, they just abandon them. They leave them in the rough terrain, in the summer heat.

And over and over again, the farmers and ranchers encounter dead bodies on their property, where the traffickers have abandoned them. Mr. President, I ask you, is that humane? Is that compassionate, the Joe Biden and Kamala Harris policy that encourages, that puts people in harm’s way, and results in people dying?

When we were down on the border, we saw a young girl who had been gang-raped by the human traffickers who had brought her to America.

The rate of sexual assault is staggering, particularly among the girls and young women, so much so that a significant percentage of young women, before they take the harrowing trip with the traffickers, will implant a birth control because they know the odds of their being sexually assaulted are so great.

And I’ll tell you, as I was doing the round tables, one of the things I saw also was the colored wristbands. The traffickers are global cartels. They’re criminals. They’re vicious criminals. They charge anyone — a young man, a young woman, a little boy, a little girl — thousands of dollars, anywhere from three, four, five, six, seven, eight thousand dollars to cross into the United States.

By the way, do you know there’s 100% operational control on the border, 100% on the southern side? Nobody crosses the border without the cartel’s permission. If you do, they will kill you. Every person who crosses the border does so after paying the cartels because you will be killed otherwise.

But often, when they come, they’ll cross and they’ll end up at a stash house. I’ve been to those stash houses. I’ve been out on the midnight patrols with the Border Patrol. You go into those stash houses, and there [are] colored wristbands that they put on the illegal immigrants. And the colors correspond to how many thousands of dollars they paid and how many thousands of dollars more they owe. Often, when they get here, the cartels will say, “Thank you for your X thousand dollars. We want Y thousand more.” Tragically, it is at those stash houses in the United States where many of the sexual assaults occur.

And so these immigrants, many of whom are young children, teenage children, when they get here, the Biden administration delivers them to their final destination. Joe Biden and Kamala Harris and their administration are the last mile of the human trafficking network.

The young women have it even worse. There are teenage girls who make the decision, “I want to come to America. I want to come to the promised land.” We’ve been a beacon of hope to millions throughout our history. They don’t realize they are stepping into hell on earth when the traffickers take them and then take them to a cartel facility in whatever city they end up in, where many of those teenage girls still owing thousands of dollars to the cartels have to work to pay off that debt by forced prostitution — young girls forced into a life of sex slavery, because the alternative is murder at the hand of the cartels.