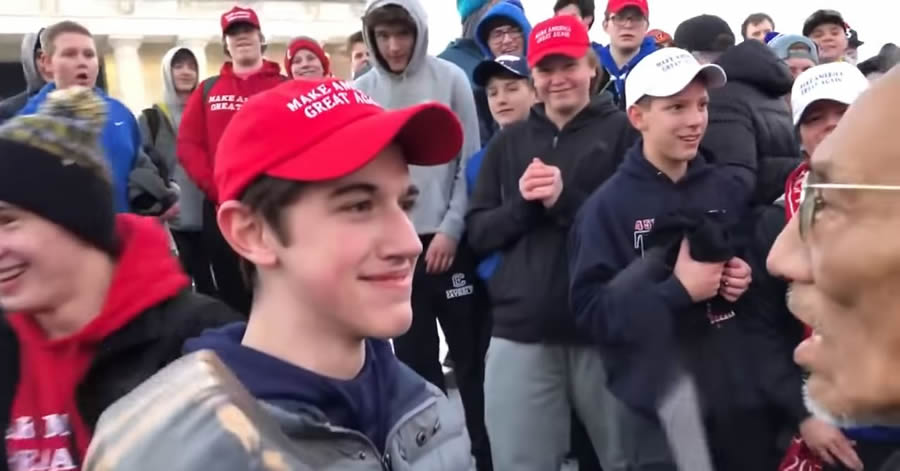 A Catholic bishop apologized Thursday to students the Diocese of Covington prematurely condemned over a video of their confrontation with Nathan Phillips and black supremacists.

“We apologize to anyone who has been offended in any way by either of our statements which were made with good will based on the information we had. We should not have allowed ourselves to be bullied and pressured into making a statement prematurely, and we take full responsibility for it,” Foys wrote, according to The Cincinnati Enquirer.

Foys also specifically apologized to Nick Sandmann, the Covington junior identified as the student who wore a “Make America Great Again” (MAGA) hat and smiled at Phillips while the Native American tribal elder banged a drum in his face.

“I especially apologize to Nicholas Sandmann and his family as well as to all CovCath families who have felt abandoned during this ordeal. Nicholas unfortunately has become the face of these allegations based on video clips,” he added. “This is not fair. It is not just.”

Scores of social media users, members of the media, public officials and Catholic leaders publicly denounced Sandmann and his peers, claiming that they acted as racist aggressors toward Phillips and the Black Hebrew Israelites during their encounter in front of the Lincoln Memorial at the March for Life. Critics said that Sandmann was smirking at Phillips out of disrespect. Many claimed that the boys exhibited racist behavior simply by wearing MAGA hats.

“We condemn the actions of the Covington Catholic High School students towards Nathan Phillips specifically, and Native Americans in general, Jan. 18, after the March for Life, in Washington, D.C. We extend our deepest apologies to Mr. Phillips,” the Covington Diocese said in a statement issued shortly after the initial video’s release.

Video evidence, however, showed that it was Phillips who approached the students, not the other way around, and that he accosted them after the black supremacists started hurling racial epithets and profanities at the boys. Sandmann clarified that he tried to remain calm and stand still and smile in order to diffuse the situation.

Testimony, in tandem with the video, also proved Phillips’ narrative of the events to be false.

Prior to his Thursday statement, Foys, said in a Wednesday address to Covington students that the diocese was justified in issuing its initial message of condemnation, given the circumstances. He gave the address the day after the diocese’s announcement of an investigation into the incident.

“Some people think our first statement was too strong, but in my mind with what we saw and what we heard at the time, we had to say what we said and we meant it. If that behavior is genuine then we have to condemn it,” Foys said, according to Messenger, the school’s publication.

“Regardless of what you heard or what you’ve read or what you think — I am on your side. I want you to come out of this in a positive light,” he added.

Foys said the diocese issued its second statement to “ameliorate some of the hate being spewed on the internet and other news media.” The school had to close for a day due to a bomb threat and an outpouring of threats of violence and sexual abuse against the students, their families and the school that came in the wake of the public’s hasty indictment of the school boys.

Foys acknowledged its second statement did nothing to alleviate the situation after the diocese immediately acquiesced to public demands to decry the students.

The bishop said the diocese awaits the final results of the third-party investigation of the incident and that it is his “hope and expectation that the results will exonerate our students and so they can move forward with their lives.”

He urged those continuing to hurl threats and vitriol toward the school and the children to desist.

The Left is Off Its Rocker, But a Rock Classic Points to Hope