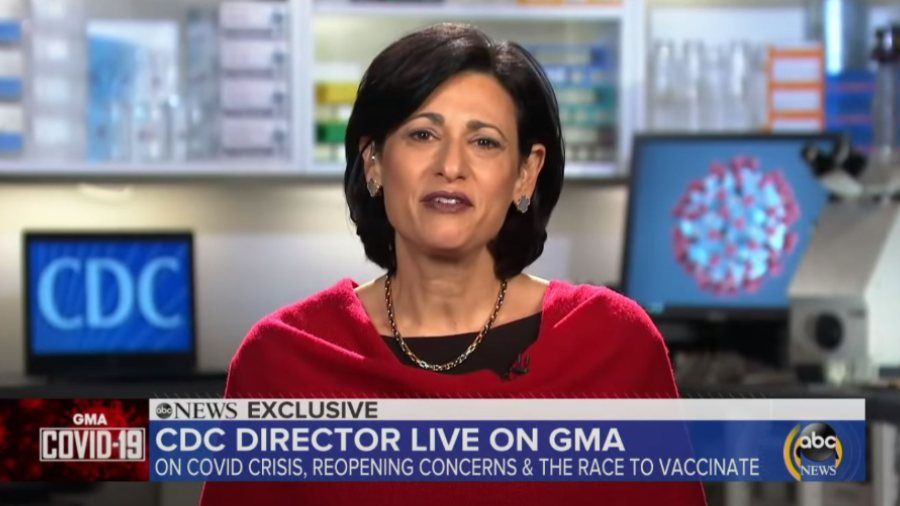 CDC Director Dr. Rochelle Walensky said it is a bad idea for Texas and other states to end mask mandates and remove capacity limits.

Biden administration health official Rochelle Walensky announced Monday that vaccinated Americans can visit with others who are vaccinated in small groups at home. But when Walensky was asked about visiting grandchildren, she said no, unless the kids are local. Even vaccinated people must avoid traveling. “Every time there’s a surge in travel, we have a surge in cases in this country.”

The Biden administration is making one exception. It’s OK to wade across the Rio Grande River and enter the U.S. illegally. Even if you have COVID-19, you can get on a bus in a Texas border town and travel to any part of the U.S., including New York, Baltimore, Miami and Los Angeles. Never mind how far and wide COVID-infected migrants spread the virus as they fan out.

On the travel question, the double standard is mind-boggling. It’s no to Grandma, but OK for illegal immigrants.

Since Joe Biden took office, he’s rapidly dismantled Trump administration policies that kept migrants in Mexico during the pandemic. Some 100,000 migrants surrendered to U.S. border officials in February, up from 78,000 in January. It’s likely to reach 1 million overall in 2021, if the trend continues.

Some single adults are sent back to Mexico, but families are permitted to stay. After a few days of processing in a detention center, they’re given documents to travel and released into a Texas border town. There, nonprofits like Catholic Charities help them get food and bus tickets to anywhere in the U.S.

No COVID Tests for Migrants

Here’s the hitch. The federal government refuses to test migrants before release unless they’re visibly sick, even though COVID-19 continues to rage in Mexico. Biden’s press spokesperson, Jen Psaki, explained that the administration considers testing a state or local responsibility.

As if not knowing migrants are spreading the disease absolves the Biden administration of any culpability. Sorry, that’s ridiculous.

Some cities, like Brownsville and El Paso, are using rapid tests to identify migrants with the virus. Others cities do not. But either way, city officials explain they have no authority to stop infected migrants from traveling. In Texas, only the feds can do that.

When Brownsville officials tested migrants last month, over 6% tested positive. Some were willing to quarantine at local hotels paid for by charities, but many boarded buses for other parts of the country.

Six percent sounds small, but 6% of 1 million migrants adds up to 60,000 — a steady stream of spreaders being knowingly dispersed throughout the nation.

No Return to Normal for Americans

Meanwhile, the Biden administration has put the brakes on Americans returning to normal life. Anthony Fauci is warning this is no time to relax. Biden accused the governor of Texas of “neanderthal thinking” for ending the mask mandate. And the Centers for Disease Control and Prevention warns Americans “to avoid all travel” to Guatemala and other Central American countries.

Yet, when it comes to illegal border crossings, any mention of disease threat is slammed as racist. What hypocrisy.

Travelers flying into the U.S. must have a negative COVID-19 test before boarding, and another negative test is recommended after landing. But illegal immigrants get a free pass to bring the coronavirus to a bus terminal near you.

Why is this happening? The White House is being taken over by minority advocacy groups who get what they demand, no matter how extreme. Instead of working with Congress and being forced to hear about the dangers of open borders, Biden issues executive orders, shutting out any debate.

Congressman Henry Cuellar, D-Texas, whose district runs along the border, warned that White House officials “should not only listen to the immigration advocates and activists,” but also to the public affected by open border policies. The facts prove they’re dangerous to our health.

Betsy McCaughey is a former lieutenant governor of New York and author of The Next Pandemic. Contact her at [email protected] or on Twitter @Betsy_McCaughey.