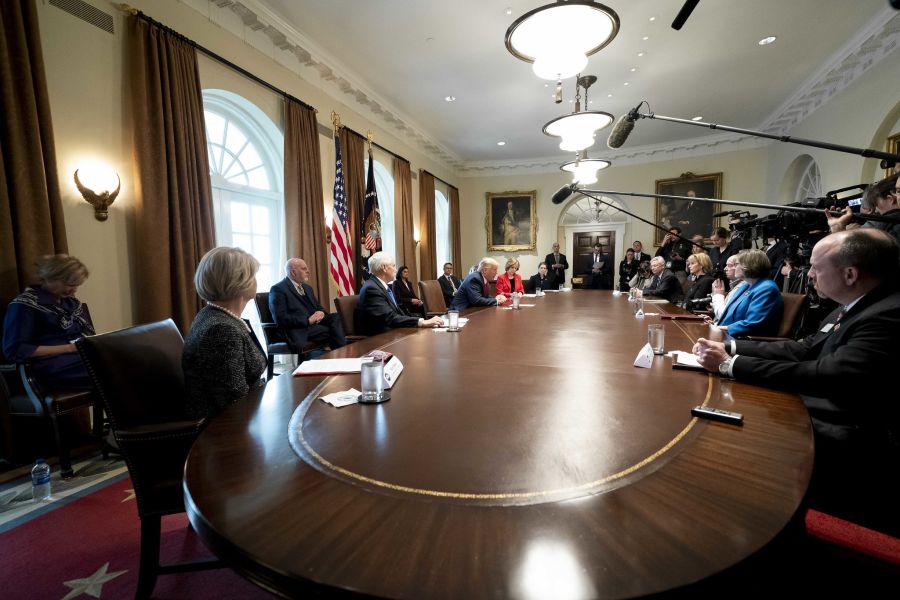 President Donald J. Trump and Vice President Mike Pence participate in a briefing with nurses on the coronavirus (COVID-19) response Wednesday morning, March 18, 2020, in the Cabinet Room of the White House.

Since pharmaceutical attorney Gregory Rigano appeared on Fox News, others (real MDs) have come forward with more information on recent studies of hydroxychloroquine, a newer version of the commonly used antimalarial drug chloroquine, and also remdesivir, which was created to fight the ebola virus. The French study referenced by Rigano is real, and there’s one out of Australia and another out of China.

Cutting the Red Tape to Save Lives

Rigano had called on President Trump to cut as much red tape as possible to hasten the approval process on new therapies. And on Thursday, the President did just that, calling on the FDA to “eliminate outdated rules and bureaucracy so this work can proceed rapidly, quickly, and I mean … fast.”

He means … FAST. And all the other words that mean fast.

“We have to remove every barrier,” the president said, “and they’ve done that, to get to the rapid deployment of safe, effective treatments.”

A Cocktail That Clears COVID-19

According to Tennessee Republican Rep. Mark Green, a former Army flight surgeon who appeared with Shannon Bream on Fox News Thursday night, the French study touted by Rigano earlier this week showed that when mixed in a “cocktail” with the antibiotic azithromycin (the familiar “Z-pack” often given to patients who have bronchitis and/or bacterial pneumonia), hydroxychloroquine can completely clear COVID-19 in as little as three days. It happened in all patients who were in the study. The sample size in the study he referenced was small, Green said, “so it’s kind of hard to extrapolate…to the whole population, but it’s very promising. One hundred percent of the virus gone in six days.”

Off-Labeling to Get the Drug Into the Fight

All of these drugs are already FDA approved for other uses and would just need to be manufactured in large quantities. (Please don’t tell me that all the manufacturing is currently being done in China!) Hydroxychloroquine is a generic [cheap] drug, Green said, “so the question will be, who’s going to stand up and manufacture it?” In this case, surely some American company would take that on. If there’s no financial incentive, our government might have to do some subsidizing to get this going now. Goodness knows, that’s a more productive use of funds than just passing out money to everyone. We need to defeat this virus so people can recover economically by getting back to work.

“I think that the FDA has joined forces in eliminating red tape to ensure that that product could be available to physicians to prescribe to their patients,” said White House coronavirus coordinator Dr. Debbie Birx on Thursday. “But we want to be able to study at the same time — not limit use but actually study it at the same time to see if it does have the impact that others have reported.”

In other words, the FDA wants to be able to collect data on all patients receiving treatment with these drugs so they can scientifically answer questions of safety and effectiveness. But, as Rep. Green pointed out, a physician doesn’t have to wait for a study — the doctor can write prescriptions right now for hydroxychloroquine (off-label use) and azithromax, with no restrictions. As I mentioned yesterday, the FDA doesn’t really have a problem with off-label use once a drug has been approved.

“[Hydroxychloroquine] is a drug that we’ve had around for decades,” Dr. Birx said. “So, it’s a pretty straightforward drug to make; there’s a lot of companies who already make it because it’s very important in our malaria fights around the world. And so, we have [the] drug available, and we really just have to see, does it actually work? We know it’s probably safe — I think the question really is, does it have a therapeutic effect, and that’s going to be studied. It looks promising. We just want to make sure that at the same time that we’re giving this option to physicians, that we’re actually studying its impact.”

You know, if researchers and bureaucrats think it’s safe but want to see if it works, doctors can really help them with that by prescribing it, especially for those who are very sick and going downhill.

Even with the President cutting red tape, the FDA is still a bureaucracy and moves slowly. Remdesivir, another antiviral, hasn’t yet completed the approval process, according to Rep. Green, but it’s already in Phase III studies with the FDA, so if it makes it, perhaps it will be available fairly soon.

My researchers turned up something very interesting: a study that compared two maps: one showing the pattern of COVID-19 infection and the other showing malaria. In countries where malaria flourishes, people often take antimalarial drugs such as chloroquine routinely as a preventative, and that may be why those countries aren’t reporting COVID-19 cases. “This is amazing…” said Dr. Roy Spencer on Facebook. “In all my years of data analysis I have never seen such a stark and strong relationship: Countries with malaria basically have no COVID-19 cases (at least not yet).”

We’re not sure if there’s anything to this, but it certainly is consistent with the theory that antimalarial drugs also fight this coronavirus. Here are the two maps.

Our commentary on Gregory Rigano and his claims about hydroxychloroquine drew letters expressing a variety of points of view. Most fell into the “it’s worth a try!” category. Some readers shared anecdotal evidence that the drug is safe, but a few others noted that it can cause retinal problems and other side effects, particularly serious among those with inflammatory disease such as rheumatoid arthritis. That’s why we can’t just hand out pills. They have to be carefully prescribed by a physician who knows the patient’s condition and medical history and who will be closely monitoring the effects, both intended and unintended. But that should be the case with every prescribed medication.

Antimalarial drugs are very commonly used in other parts of the world — if you’ve traveled abroad to India or Africa, you likely have taken them — and might be completely harmless for most people, but there’s hardly any drug that is safe for everyone. There’s also the matter of how much to take for this particular illness, when to take it, how often and for how long. A medication that might be fine at a low dose or in the short term to treat or head off coronavirus might be harmful if taken at a high dose or for months at a time. And, of course, there might be bad interactions with other medications a patient is already taking. That’s why the FDA wants as much data as it can get. If we start giving these medications to patients, we’re essentially initiating a very large-scale human trial. But that appears to be just what we need to do.