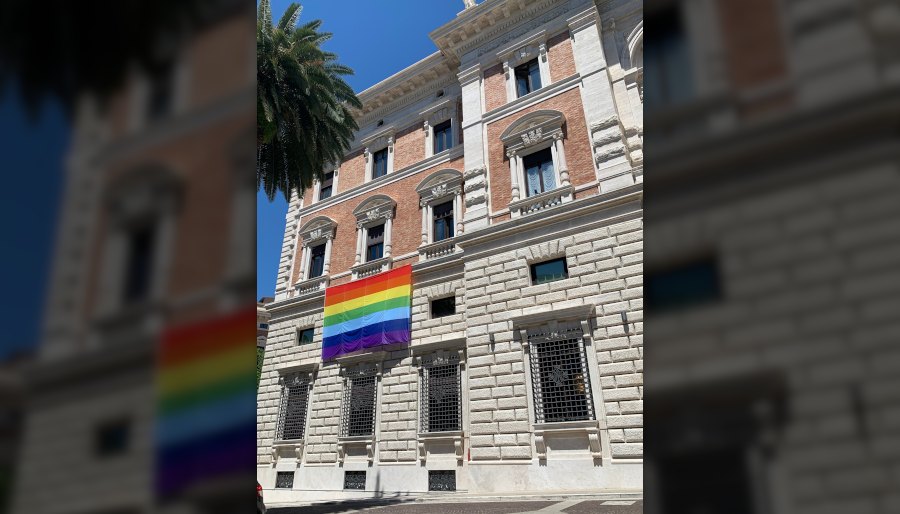 Conservatives and commentators accused the U.S. Embassy to the Holy See Tuesday of deliberately provoking the Catholic Church by flying a gay pride flag at an embassy to the Catholic city-state of the Vatican.

The U.S. Embassy to the Holy See’s Twitter account tweeted a photo of a large gay pride flag hanging from the Italian building Tuesday with the caption: “The U.S. Embassy to the Holy See celebrates #PrideMonth with the Pride flag on display during the month of June. The United States respects the dignity and equality of LGBTQI+ people. LGBTQI+ rights are human rights.”

The embassy did not immediately respond to a request for comment from the Daily Caller News Foundation. A senior State Department spokesman told the DCNF that “U.S. embassies and consulates develop individual plans to raise awareness of violence, human rights abuses, and discrimination targeting LGBTQI+ persons, including appropriate exterior displays.”

“If Chiefs of Mission determine that it is appropriate to do so, they may fly the Pride flag on external-facing flagpoles below the U.S. flag at U.S. diplomatic facilities overseas,” the spokesperson said. The State Department did not respond to further requests for comment.

The move echoes President Joe Biden’s Tuesday statements in honor of Pride Month — statements that conflict with Biden’s own Catholic faith, which teaches that “homosexual acts are intrinsically disordered” and “contrary to the natural law” as “they close the sexual act to the gift of life” and “do not proceed from a genuine affective and sexual complementarity.”

Marriage is a life-long union between a man and a woman, according to the Catholic Church, and is “ordered toward the good of the spouses and the procreation and education of offspring.”

Catholics and conservatives heavily criticized the embassy’s actions, suggesting that the move was a deliberate effort to antagonize the Catholic Church during pride month.

New York Post writer and author Sohrab Amari called the image of the embassy swathed in the flag a “profanation, a desecration,” and Catholic University Professor Chad Pecknold tweeted that the move was “not diplomacy, but a grave offense against the Church.”

Commentator and conservative pundit Dinesh D’Souza called the hanging of the flag a “deliberate provocation.”

“It is intended to offend devout Catholic sensibilities,” D’Souza said. “Trampling on human hearts is what the Left does best.”

Difficult to view this as anything other than a deliberate, provocative insult to traditional Catholicism.

“He claims to support law enforcement, yet has given permission for the divisive BLM flag to fly above our embassies, despite their desire to defund the police and their founding member’s calls for Israel to no longer exist,” Duncan said. “The only banner that is truly representative of all Americans is the American flag, which is why I’ve filed legislation that prohibits all other political symbols from being displayed above our foreign embassies and consulates.”

Disrespectful, inappropriate, and exactly why I filed the Old Glory Only Act. The only flag that should be flying at our embassies is the flag of the United States of America. https://t.co/6pibXS3tAI

During former President Donald Trump’s administration, then-Secretary of State Mike Pompeo’s department had prevented embassies from flying the pride flag on the same pole as the American flag, the New York Post reported, but Secretary of State Tony Blinken authorized US diplomatic missions to fly the pride flags on the same pole as American flags in April.

“As the president said on the night we were elected, we’re proud to be able to serve every American. We both feel that way very passionately, but when it comes to the American flagpole, and American embassies, and capitals around the world, one American flag flies,” Pompeo said at the time, according to the New York Post.

Other lawmakers and commentators pointed out that United States embassies might be afraid to fly the gay pride flag in middle eastern countries.

“Call it a just a hunch, but I don’t think you will see this from our embassy in Saudi Arabia,” Republican Florida Sen. Marco Rubio tweeted.

Call it a just a hunch, but I don’t think you will see this from our embassy in Saudi Arabia https://t.co/CNPa4bIS8c

This just goes to show Christianity is not respected by the Left.

Y’all know they wouldn’t dare do this in the embassies in Qatar or Saudi Arabia. https://t.co/NYXSClNddX

“This just goes to show Christianity is not respected by the Left,” tweeted Republican Florida candidate Lavern Spicer. “Y’all know they wouldn’t dare do this in the embassies in Qatar or Saudi Arabia.”

Neither the White House nor the Vatican responded to requests for comment from the DCNF.