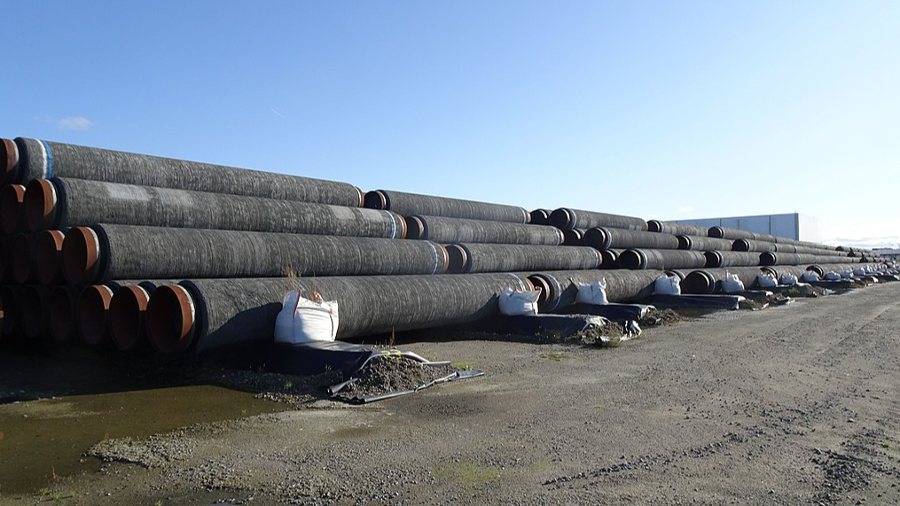 Pipes for Nord Stream 2 at a port in Sassnitz, Germany.

The danger of the newly completed Nord Stream 2 pipeline to trans-Atlantic security is a rare issue of bipartisan agreement.

Many in Congress recognize that the pipeline is neither economically necessary, nor geopolitically prudent.

If it becomes operational, Nord Stream 2 will increase European dependence on Russian natural gas, thereby magnifying Moscow’s ability to use its European energy dominance as a political trump card; calcify divisions in Europe over energy that Nord Stream 2 construction has opened; and undermine U.S. allies in Eastern and Central Europe.

It’s in America’s interest to ensure it never becomes operational, and Russia’s recent pressure campaign in Europe has opened a window of opportunity for the U.S. to end the project once and for all.

Russia’s massing of forces along the border with Ukraine, along with other forms of aggression against U.S. allies in Europe, has led the new government in Berlin to rethink support for Nord Stream 2. In November, Germany’s Federal Network Agency suspended the certification process due to the Nord Stream 2’s operating company not meeting conditions as an “independent transmissions operator.”

A Window of Opportunity

The German government has yet to land on a unified position toward Nord Stream 2, and strong opposition exists within the governing coalition.

In the event of further escalation, this gas pipeline could not come into service.

Certification will almost certainly not be granted in the first half of 2022, leaving a window of opportunity to stop Nord Stream 2 once and for all.

Allowing the pipeline to become operational opens a divisive fissure inside Europe, while saddling the U.S. and Europe with a geopolitical millstone in its dealings with Russia for decades to come.

However, the window will not stay open forever.

While opposition does indeed exist within the government, Chancellor Olaf Scholz will ultimately have the final say. He recently stated that Russia’s aggression against Ukraine and Nord Stream 2 should not be linked, and that he sees the pipeline as a “private sector project,” repeating the mantra used by his predecessor, former Chancellor Angela Merkel, to excuse the project’s negative geopolitical ramifications.

Stopping the Pipeline Helps Europe and the U.S.

The Biden administration in the spring acquiesced on the pipeline’s final construction, viewing such tacit support as a necessary salve for bruised U.S.-German relations. The administration continues to oppose efforts to impose additional sanctions against Nord Stream 2 in the belief, shared by some in Congress, that such efforts “would only serve to undermine unity amongst our European allies at a crucial moment, when we need to present a unified front in response to Russian threats against Ukraine.”

That belief is mistaken.

Far from hampering trans-Atlantic unity in responding to Russian aggression against Ukraine, killing off Nord Stream 2 would bolster unity and end a glaring incongruence that undermines U.S. and European efforts to push back against Russia.

Policymakers should remember that most European nations, the European Commission, and a sizable number of the German, Austrian and Dutch publics and government ministers oppose Nord Stream 2.

Stopping the pipeline is not anti-European.

Allowing the pipeline to become operational opens a divisive fissure inside Europe, while saddling the U.S. and Europe with a geopolitical millstone in its dealings with Russia for decades to come.

Time for the U.S. to Renew Pressure

Renewed U.S. pressure on Nord Stream 2 would scare many insurers away, and likely persuade a German government already divided and lukewarm on the project that continued support for Nord Stream 2 is no longer worth the high cost.

Russia is using high energy prices and historically low gas reserves in Europe to push for swift certification of the pipeline.

Congress has tools to prevent Nord Stream 2 from becoming operational, and recent Russian overreach has opened a window of opportunity for the U.S. to wield them more effectively.

The U.S. should do so without delay.

U.S. pressure exerted at this crucial time would stand a good chance of delivering the coup de grace to the project, while backing off would be interpreted as a wink and a nod in Berlin that once things cool down, it’s OK to resume business as usual.

It’s time for policymakers in Congress to be honest with themselves that the past six months have proven the Biden administration’s Nord Stream 2 policy is a failure. Congress retains the tools to prevent the pipeline from becoming operational, and for the sake of trans-Atlantic security, it should utilize them without delay.

Daniel Kochis is a policy analyst for European affairs at The Heritage Foundation’s Margaret Thatcher Center for Freedom. Read his research.