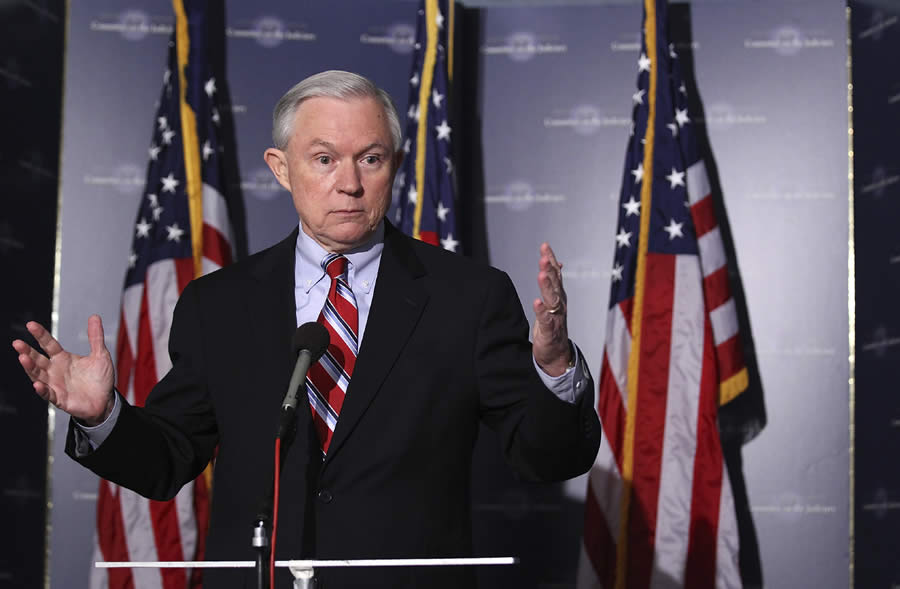 Contrary to the expectations of many people, President-elect Donald Trump has been filling his cabinet with serious, no-nonsense conservatives. The Left will confront appointees who would make Ronald Reagan proud. None may be more important than Jeff Sessions as Attorney General.

Commitment to the rule of law always has set America apart from most other nations. The U.S. doesn’t always get it right. But we strive toward the ideal of a government of laws rather than men.

After eight years of the Obama administration, the next attorney general will need to start on day one to restore respect for the rule of law throughout the federal government. Officials need to remember that the Constitution creates an institution of limited powers tasked with protecting individual liberty.

Of course, Democrats fear government rooted in law but they can’t admit that in public. So they are resorting to their usual smear tactics, branding Sessions as a racist. Three decades ago, the Senate Judiciary Committee blocked his nomination to a federal judgeship based on disputed claims of insensitive comments made years before. He later ran for the Senate, where he sits on the Judiciary Committee.

Sen. Jeff Sessions knows where the alligators sleep, so he’s one of the best people to help “drain the swamp.”

Columnist Quin Hillyer has followed Sessions’ career and dismissed the criticism: “Mr. Sessions has now served 20 years in the Senate. No racist could keep bigotry closeted for so long.” Nor, added Hillyer, would a racist have bucked members of his own party to reform racially discriminatory sentencing laws, which more heavily punished use of crack, primarily a black offense, than cocaine, which is favored by whites.

What really scares Sessions’ opponents is that the former U.S. Attorney and Alabama Attorney General really knows the issues and what is necessary to fix the DOJ, a department badly politicized by the Obama administration. Sessions also knows where the bodies are buried there, including the ones that have been moved — and how often they vote.

As U.S. Attorney, Sessions cooperated with local officials in Alabama to investigate vote fraud in 1982 and 1984 after complaints from black as well as white candidates and citizens. The Left politicized the case, drawing in Bill Clinton’s notorious associate Lani Guinier as well as Barack Obama’s friend and future Massachusetts governor Deval Patrick as defense attorneys.

There is a much greater mess to clean up on the issue of election integrity today. Voter registration lists are commonly inaccurate. The American Civil Rights Union has been challenging counties that have more people registered than are eligible to vote. A Pew Research Center study figured that almost two million dead people are registered nationwide: some of those registered are 100 or even 200 years old.

Millions more people are registered in multiple states, while the records for about one out of every eight registered voters are “significantly inaccurate or no longer valid,” concluded Pew. By one estimate, more than a million noncitizens may have voted in November. It wouldn’t have taken many more such ballots to have shifted the key swing states and presidency to Hillary Clinton.

Sen. Sessions also has emphasized tough yet fair enforcement of immigration laws. He is well matched with President-elect Donald Trump, who alone put the issue at the center of his presidential campaign. The American people believe America’s borders must be defended and the law must be respected. That needs to begin with the executive branch, which no longer should treat immigration rules as voluntary.

Electoral integrity and immigration enforcement are two issues in need of urgent attention, but there are others as well. The next attorney general will have a full agenda.

For instance, the First Amendment is under constant attack. People came to America from around the world as religious refugees because the U.S. respected what has been called the First Freedom — the bedrock for all other liberties. Yet religious freedom is increasingly threatened by activists, bureaucrats, legislators and lawyers who have gone to war against those who believe in traditional values and truths. Demands for tolerance and respect disappear when Christians are in the dock.

Freedom of speech has come under fire as well. Political Correctness increasingly dominates American universities and seeps into the workplace. The left has been hoping to use the death of Supreme Court Justice Antonin Scalia to narrow if not eliminate Second Amendment gun rights. Over the last eight years federal agencies, including the Internal Revenue Service, have stopped fairly enforcing the law. There must be no more targeting of Americans for political reasons.

After eight years of misgovernment in Obama’s Washington, there is much the new administration can do for America.

Sen. Jeff Sessions knows where the alligators sleep, so he’s one of the best people to help “drain the swamp.”

J. Kenneth Blackwell, a former mayor of Cincinnati, is a Senior Fellow and Policy Board member for the American Civil Rights Union.

The Worm Has Turned on the Democrats

William Barr Knows What the Pro-Choice People Are Really Up To. That’s Why They’re Panicking