Coming Soon! Update to The Creator and the Cosmos — Interview with Author Hugh Ross 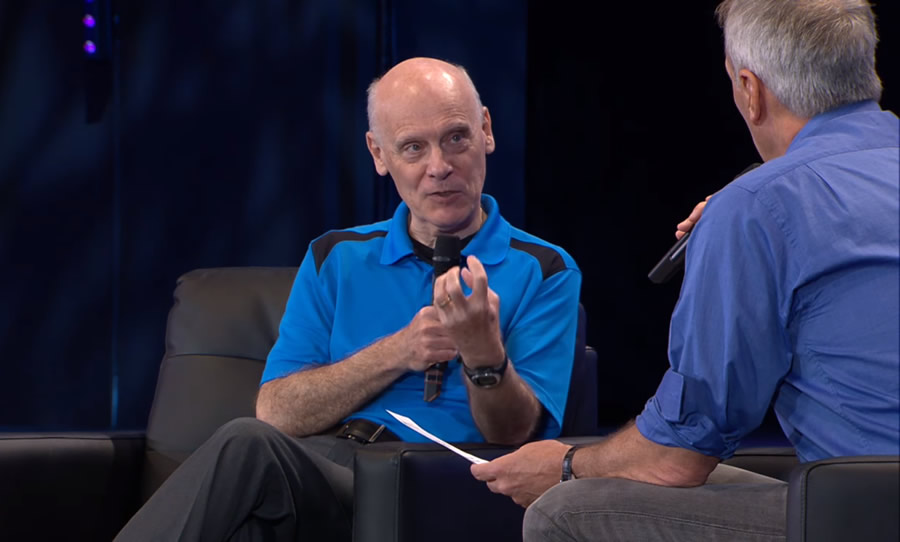 In this Sept. 7, 2014, file photo, Dr. Hugh Ross speaks to Ed Young in a Q&A session during Young's series "Mythbusters" at Fellowship Church.

He offered me the privilege to endorse the book and I highly recommend it. Check out his brief answers to a few of my questions [slightly edited for The Stream] and consider getting a copy of his excellent book.

Sean McDowell: You first wrote The Creator and the Cosmos in 1993. How has the scientific evidence for a Creator increased in the past 25 years?

Dr. Hugh Ross: The new edition is the fourth. With every new edition I was able to demonstrate a biblical principle: The more we learn about the record of nature, the more evidence we will uncover for God’s supernatural handiwork. The fourth edition offers the most dramatic demonstration of this principle. It includes 70 pages of new content plus a 300-page online compendium.

McDowell: Can you share a specific new finding that you include in this update? And how does it confirm the existence of a Creator?

These compelling evidences had forced non-theistic scientists to speculate that there could be a loophole that would permit the universe to have existed eternally, and thus not to have been created. But that loophole had to fit in the remaining tiny epoch (10-43 seconds) of the earliest cosmic history, the very brief period that our measurements cannot penetrate. Their hope was that when the expanding universe was smaller than the diameter of an electron, quantum space-time fluctuations were so enormous that they allowed that loophole to exist.

Two years ago, though, astronomers pointed out that if these fluctuations had indeed existed then, they would blur the images of distant quasars and blazars. Observations made a year ago rule out such blurring. Thus, there is no possible escape. A God beyond space and time must exist who created our universe.

McDowell: Where do you see the scientific research heading over the next 25 years? Any specific predictions?

Dr. Ross: I see science establishing fine-tuning design of the universe everywhere, and for everything within it, to make possible a home for humanity. Not only that, I also see it advancing to establish that the universe was designed and fine-tuned to make redemption from sin and evil possible among billions of human beings, within just thousands of years. The Bible tells us that God began His works of redemption before He created anything. All the major creation texts in the Bible link the doctrine of creation to the doctrine of redemption. Thus, I expect that every event and every component in the history of the universe, Earth, and Earth’s life will be found to play a role in making that redemption possible for all these people in that length of time.

In my book Improbable Planet I describe how the latest scientific findings give us some initial verifications of this conclusion. I look forward to future scientific research settling beyond any reasonable doubt that God must exist, and that He is intent on redeeming billions of humans, within just thousands of years, from their tendencies to commit sin and evil. And also that His redemptive plan will be fulfilled within the next several centuries or less.

McDowell: What is the process like when updating a book of this magnitude? Can you give us a glimpse behind the curtain?

Dr. Ross: This updated edition took two and a half years of research and writing on my part. Then there was another 9 months of editing and publication preparation on the part of our RTB Press staff. I spent a whole year surveying the scientific literature and synthesizing from what I read the latest new scientific evidences for the God of the Bible. I studied objections raised by non-theistic scientists. During the subsequent 6 months, I developed several talks based on what I had discovered. I delivered those talks in front of both scientific audiences and non-scientific audiences. This was a means for acquiring critique and feedback.

The next year I spent writing the fourth edition. I made frequent revisions in light of newer discoveries and comments I had received from scientists and theologians who reviewed the early manuscripts. The next 9 months I spent working with our editorial staff on enhancing the book’s readability for lay audiences. And in that final stage we also created the book’s figures, diagrams, tables and index.

McDowell: What do you consider the toughest naturalistic objection to cosmological design? And how do you respond?

Dr. Ross: I don’t know about the toughest objection. But certainly the most frequent objection is the appeal to a multiverse to downplay the fine-tuning evidence. The multiverse appeal speculates that an infinite number of universes exist. Each universe possesses physical properties distinct from all the other universes. Non-theists claim that in such a multiverse there must exist at least one universe where by pure chance all the features needed for life to exist must occur.

In my responses, I first point out that all multiverse models are subject to the space-time theorems that establish a cosmic Creator beyond space and time. These models do not avoid the need for God.

Republished with permission from Sean McDowell.org.