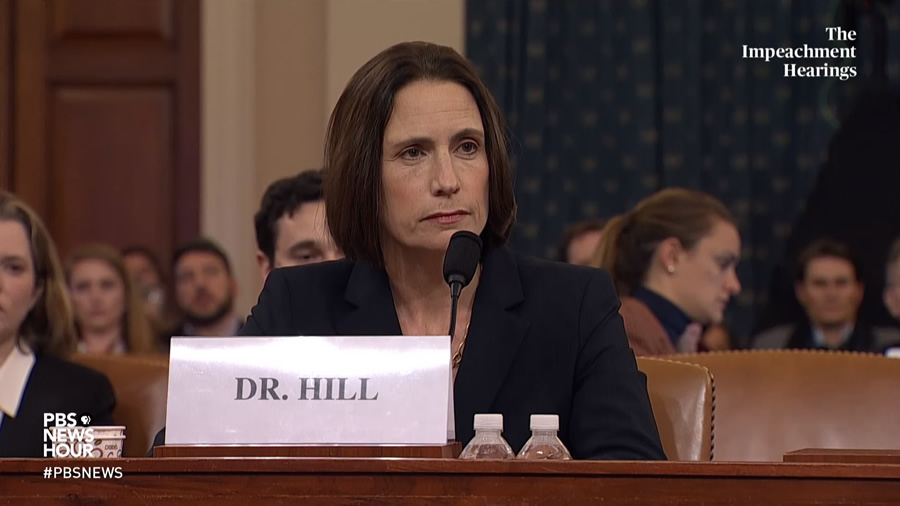 Question: How many Clinton cronies does it take to screw in a lightbulb.

Answer: None — we have to do it because they prefer the cover of darkness.

There may be no fingerprints from Clinton and her cronies on that lightbulb, but their grubby prints are all over the Steele “dossier” and election interference that came from (yes) Ukraine. As mentioned in Friday’s newsletter, “inquiry” witness and passionate George Soros defender Dr. Fiona Hill is well acquainted with some of them.

But were you aware she even got an “advance” copy of the dossier, the day before it was published by Buzzfeed? She got to see it courtesy of Strobe Talbott, who ran the Brookings Institution at the time she was there. And how did he get it? Chuck Ross at the Daily Caller reported on this back in late December 2018.

Dan Bongino, in his podcast Friday, picked up on the same strange testimony from Dr. Hill that we did. Looking at the clip again, it certainly seems that Dr. Hill was prepared for the leading question on anti-Semitism as it relates to criticism of Soros. With no hesitation, she was ready to stand up for him and make that stern little speech about The Protocols of the Elders of Zion, agreeing that everyone who criticizes him must be motivated by at least “a tinge” of anti-Semitism. (Give me a break.) So why would Dr. Hill suddenly be asked a question out of left field (pun intended) about anti-Semitism and Soros? In case we need reminding, Bongino makes the point that nothing Democrats do is unplanned. They surely had a strategy behind this and every other question they asked.

Bongino says this digression during the hearing has to do with Marie Yovanovich and the “do-not-prosecute” list — yes, it exists — sent from George Kent (the one in the bow tie during testimony) to a Ukrainian prosecutor kindly suggesting that they not go down certain roads, including prosecution of a group called AntAC, which is Soros-funded. As John Solomon reported in The Hill, there’s also a link between the FBI and AntAC — as then-FBI official Karen Greenaway, one of the lead investigators in the Paul Manafort case in Ukraine, attended numerous AntAC functions (“as part of her investigative functions,” the FBI later explained), working alongside its executive director and Marie Yovanovich at one event in 2016. Former Ukrainian prosecutor Lutsenko was also in attendance.

Well, was Greenaway there on behalf of the FBI to investigate the Soros organization or to support it? The latter seems more likely, as she actually ended up retiring from the FBI and joining the executive board of AntAC.

Bongino takes a deep dive into the connections between Soros-funded companies and the Obama-era State Department and DOJ, reading from several articles by John Solomon, who has been all over this since long before Dr. Hill took the witness chair last week. (I highly recommend Bongino’s daily podcasts.) The DOJ even opened a case against Ukrainian oligarch Dmitry Firtash, Soros’ business rival in Ukraine, which appears to have cleared the way for Soros to invest $1 billion in his own business there. According to Bongino, that case has since fallen apart.

As Solomon reports, none other than Andrew Weissmann was involved. Shortly after Robert Mueller was appointed special counsel, Weissmann “quietly reached out to the American lawyers for [Firtash] with a tempting offer: give us some dirt on Donald Trump in the Russia case, and Team Mueller might make his 2014 U.S. criminal charges go away.”

If Ukraine is as corrupt as we keep hearing (and it is), then we must admit that our own DOJ and State Department, certainly under then-Secretaries of State Hillary Clinton and John Kerry, have been acting as enablers. And now we have sham “inquiry” hearings attacking President Trump and defending … George Soros? It almost defies imagination.

As Bongino put it, “Nothing the Democrats do is by chance. They are involved in the biggest money-influence operation — that morphed into spying, that morphed into “Fake Whistleblower-gate” — in human history. A liberal mega-donor, George Soros, and a group he was involved in that was suspected by Ukrainian authorities of some illicit activity — cases against them were squashed … by our own officials overseas, working for a liberal administration under Barack Obama. Trump gets elected. The “do-not-prosecute” list and everything comes out, including the influence of Soros on the State Department and elsewhere. They panic: ‘That’s anti-Semitic!’”

Solomon reported earlier this year — in news that takes on new significance, given the focus on our Ukrainian embassy during “inquiry” testimony — that a spokesperson for Soros said the financier “wrote a sizeable check from his personal funds in fall 2017 to a new group, Democracy Integrity Project [try not to laugh], started by a former FBI agent and Senate staffer Daniel Jones to continue ‘investigation and research into foreign interference in American elections and European elections.’”

Soros was asked not to reveal the size of the contribution, which leads me to believe it must have been unusually large. According to the spokesperson, “Soros later learned the group hired Fusion GPS, the same firm that was paid by Hillary Clinton’s campaign and the Democratic Party to create the infamous ‘Steele dossier’ alleging Trump-Russia collusion.” So … George Soros’ money paid dirty “oppo research” company Fusion GPS, which funded the dossier. Imagine that. But, of course, if you say anything bad about Soros, it’s because you hate Jews.

Here’s another Solomon piece from August, laying out the access Soros has had to our State Department — particularly in 2016, when Trump was headed for the nomination — by way of Victoria Nuland, then the top State official for Russia and Ukraine policy. (She was pro-Hillary, of course, and her husband works at the Brookings Institution.) It’s easy to see the power wielded by Soros, with his billions, among leftists inside our government.

There’s much more to this swamp tale, and Bongino promised to “quadruple-down” in the face of any threats or intimidation. (We will, too.) He knows Solomon has got the goods and that his own dot-connecting will stand the test — “You can cash that check and take it to the bank,” he says.

It’s obvious now why Democrats have tried virtually everything to get Trump out. They never in their wildest nightmares thought he’d get elected and start screwing in that light bulb. If he wins a second term, that will give him lots more time to screw it in the rest of the way.

A nice companion piece to all this, when you have time, is Sharyl Attkisson’s thorough timeline of “collaboration” among the DNC, through Alexandra Chalupa, and the U.S. embassy in Ukraine. The amount of detail here, that might intimidate some from reading it all, is the very reason it’s so powerful.

As for Solomon, he’s currently on the receiving end of serious attempts to discredit his work. Timing suggests he’s been targeted because he sniffed around too close to corruption in Ukraine and its relationship to our government. He acquitted himself well in this interview with Howard Kurtz.

After Seeing ‘Legal Experts’ Testify, I’m Proud to Be a Republican