Churches Across the Country Attacked 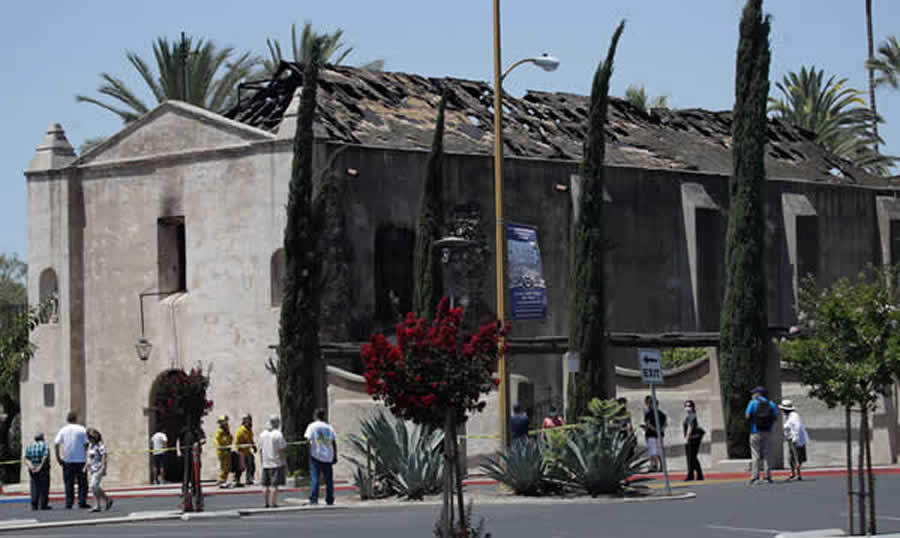 It looked like something out of a 2015 news report — a picture from ISIS, maybe, torching its way through Mosul. But the charred pews and collapsed roof were not the work of Islamic terrorists, but America’s own.

Last weekend, the rioters, the same ones who wanted us to believe their cause is justice, came for our churches — using gasoline, lighters, gallons of paint, and vans to drive their message of destruction and chaos through the heart of America’s faithful.

It took more than 50 firefighters to put out the mountain of flames at San Gabriel Church, which was left nothing but a rickety frame of smoldering ash.

“It’s a tragic loss for our city,” exhausted fire chief Antonio Negrete told reporters. “It’s our city identifier.” Now, months shy of its 250-year birthday celebration, parishioners will be digging through the rubble instead.

While Californians watched helplessly as a town symbol burned, people in Florida’s Queen of Peace Catholic Church were praying in the sanctuary when they heard a car crash through the foyer. Seconds later, the smell of smoke clouding the entry.

Laughing about it later with police, the 23-year-old arsonist said he was on a “mission.” Turns out, it was a mission several radicals shared, as a wave of destruction hit as many as five more churches in 48 hours.

Even historically black congregations were targets, as Calvary Baptist in San Diego watched its building for children’s ministry burn to the ground after a “suspicious” blaze started in the attic.

In New York City, the mobs made bonfires out of two Virgin Mary statues, with words like “IDOL” scrawled in ugly black paint down others. Tuesday, even a Jesus sculpture was decapitated.

The Anti-American Transformation of America

Is this what it’s come to — blaming churches for George Floyd’s death? No, Family Research Council’s Ken Blackwell points out, because this was never about George Floyd to begin with. That was all a smokescreen to exploit the mobs’ real agenda: fundamentally transforming America.

Black Lives Matter, Antifa, the anarchists, and vigilantes, they’re all “trained Marxists.” And Marxism “has no place for God.”

Activist Jeffrey Shaun King was pretty clear about that from the get-go, implying that this was about a lot more than slavery and the Civil War. “All murals and stained-glass windows of white Jesus and his European mother and their white friends should also come down. They are a gross form of white supremacy created as tools of oppression, racist propaganda.”

This isn’t about Jesus being white. (He wasn’t.) It’s about hating what Jesus and these churches represent: Truth.

This is the French Revolution Redux

“You saw this with the French Revolution,” Eric Metaxas pointed out. “There was [an abhorrence] at the bottom of it of God, of any kind of authority. And these people are drunk with the idea that they can somehow be an authority themselves, they can seize power … If you really want to cut to the chase, you forget about [Confederate] generals and things. You go right for God, you go right for the Virgin Mary, my goodness, you go for churches.”

If you want to know why the mainstream media isn’t covering these attacks — and many have wondered — it’s no secret. They don’t want to expose this movement for what it is — a sham of racial equality and a revolt against the rule of law rooted in the transcendent truth of God.

Once that foundation for government is gone, and these zealots are coming for it, it’s only a matter of time before America is a hollowed shell ready for transformation.

That’s why Americans, especially Christians, are making a huge mistake burying their head in the sand thinking this, too, shall pass. It will pass, all right, along with our freedoms if we don’t wake up to the threat. Some mayors and leaders made the mistake that if we just feed the mobs a few statues, they’ll go quietly into the night.

That’s the trouble with trying to reason with extremists, Conrad Black points out. “They don’t really want to reach an agreement. They skulked forward hiding behind the skirts of respectable reform organizations who wish equality and brotherhood in America.”

Now, our monuments aren’t just paying for it, but our faith communities too.

Back when ISIS marched through small Iraqi towns, destroying ancient artifacts and scared sites, the West was appalled. We prided ourselves, Victor Davis Hanson says, “on the idea that liberal societies would never descend into such nihilism.” What a difference five years makes.