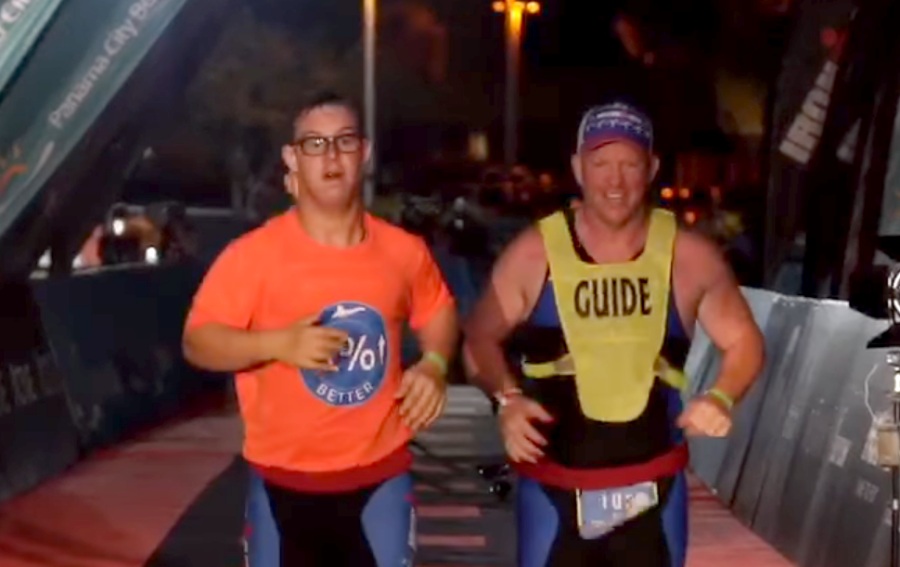 In this screengrab from video, Chris Nikic crosses the Ironman finish line with his guide, Dan Grieb, on Nov. 7, 2020.

This past weekend in Florida, 21-year-old Chris Nikic completed one of the most challenging feats in all of sports. The Ironman triathlon is a 2.4 mile swim, followed by a 112-mile bicycle ride, topped off by a full marathon, a 26.2 mile run. At one point, Nikic fell off his bike. During a nutrition stop, he was attacked by ants. Still, he completed the race in 16 hours 46 minutes and 9 seconds, 14 minutes under cutoff time. Oh, and Chris is the first athlete with Down Syndrome to finish an Ironman competition.

Nikic now joins the annals of others with intellectual disabilities doing the improbable. In 2006, Jason McElwain sank six three-pointers in the last four minutes of a New York district basketball championship game. McElwain has autism. Then there is Tim Harris, who with his parents help, opened a restaurant in New Mexico named “Tim’s Place,” known for its “breakfast, lunch, and hugs.” My family visited Tim’s place in 2013, where we got lunch and hugs. At the time, the hug counter in the restaurant already topped 1 million. The restaurant closed a few years ago when Tim and his family moved, but he still has an impressive social media following and has written articles for CNN and other national news outlets.

And I shouldn’t forget to mention Max, Chuck Colson’s grandson. Max has autism, but during the COVID-19 quarantine, Max has blessed an awful lot of people by drawing hearts and starting his own stationery business.

How Do We Judge an Individual’s Worth?

Stories like these are much-needed reminders that people, especially those with disabilities, are often capable of far more than we can imagine. At the same time, if we’re not careful, while we rightly celebrate stories like Nikic, McElwain, Harris and Max, in no way should we imply that a person’s worth is dependent on their accomplishments and abilities. That very bad idea has created countless victims, especially for people with Down Syndrome.

For example, a recent Christian Post article described how women, 69% of the time, are immediately offered an abortion when their child is diagnosed with Down Syndrome in utero. If they decline, they are asked again. And often, again. One woman reported being asked fifteen times! Government policies in countries like Iceland and Denmark have resulted in only a handful of children with Down Syndrome born each year. In fact, about 90 percent of children diagnosed with Down Syndrome in Europe are aborted. In the U.S., the best estimates are about 65 percent.

Parents of children with intellectual disabilities, who have already exhibited love and moral fortitude in resisting the social pressures to abort, have chosen a path that is not only difficult, but profoundly counter-cultural. Increasingly, having and raising children is evaluated in terms of personal fulfillment and validation, with a minimal amount of inconvenience and never suffering.

In that context, in any context, to judge an individual’s worth by what they can achieve or contribute is fundamentally inhumane, and to put it bluntly, children just don’t “pay off” in the end. There’s no legitimate method of doing a cost-benefit analysis of kids based on their success or our self-fulfillment.

The Dignity of Human Life Is Inherent, Not Acquired

Completing an Ironman contest, running a restaurant, and sinking three-pointers is amazing for anyone, especially those with a disability. We celebrate their accomplishments especially because they’ve proved the cynics and skeptics wrong. Still, we must be clear: the dignity of any human life is inherent, not acquired. The value of every life is priceless already, and not increased one cent by an amazing accomplishment.

It’s a wonderful thing when the talents of people like Chris Nikic are celebrated, or when a baby with Down Syndrome is named the official Gerber baby, or when an actor like Zack Gottsagen in the movie Peanut Butter Falcon is recognized for delivering an incredible performance. At these times, Christians should be cheering more loudly than anyone else.

But remember, and Christians should be saying this more loudly than anyone else, it’s not what we can do that matters. It’s Whose image we bear.

Roberto Rivera is a Fellow and Senior Writer at the Colson Center.