The Chick-fil-A Argument for the Resurrection

What’s one of the most disappointing feelings in the world? Craving Chick-Fil-A and realizing that it’s Sunday. The chicken chain’s founder famously closed all locations on Sundays because of his Christian beliefs. But what’s the deal with the whole “Christians worshipping on a Sunday” thing? And does it serve as evidence for Christianity?

You might think that’s a weird question, but according to the 19th-century scholar and clergyman George Maclear, it does. He wrote why in a 40-page essay titled “The Evidential Value of the Observance of the Lord’s Day.” In this tract, Maclear provides the historical background data regarding the celebration of Lord’s Day. He then asks his reader what best explains the evidence.

The Historical Value of Memorials

Maclear’s reasoning is based on an idea that’s summarized by his contemporary B.F. Westcott, who he quotes in his opening paragraph. In his book The Gospel of the Resurrection, Westcott wrote: “No evidence of the power and reality of a belief can be less open to suspicion than that which is derived from public services which, as far as all evidence reaches, were contemporaneous with its origin and uninterruptedly perpetuated throughout the body that holds it.”

In other words, memorials are often evidence of historical events. This is particularly true when that memorial goes back to the event itself and has been practiced without stopping since.

This under-the-radar argument adds a line of support to the already-robust historical case for the resurrection. And Maclear’s not alone in making this argument. An intellectual giant like philosopher Richard Swinburne includes a variation of this argument in his magisterial work The Resurrection of God Incarnate.

In this post, I’ll run-down his arguments. You can also pick up a free copy of Maclear’s essay at the bottom of the post and read it for yourself. 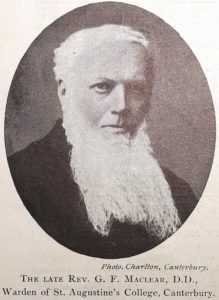 First Maclear goes through the historical evidence of Christians worshipping together on Sunday. Brace yourself for lots of incoming quotes:

“Forasmuch as some on the Lord’s day bow the knee in prayer, as also the other days of Pentecost, for the sake of uniformity they now shall stand to offer their prayers to God.”

“We keep the Lord’s day as a day of joy, because of Him who rose upon it.” (Canonical Epistle, 15)

“We solemnize the day after Saturday in contradistinction to those who call this day their Sabbath.” (Apology, Ch 16)

And on the day called Sunday, all who live in cities or the country gather together to one place, and the memoirs of the apostles or the writings of the prophets are read, as long as time permits; then, when the reader has ceased, the president verbally instructs and exhorts to the imitation of these good things … But Sunday is the day on which we all hold our common assembly because it is the first day on which God, having wrought a change in the darkness and matter, made the world; and Jesus Christ our Savior on the same day rose from the dead. (1st Apology, 67:1-3, 7)

They affirmed, however, the whole of their guilt, or their error, was, that they were in the habit of meeting on a certain fixed day before it was light, when they sang in alternate verses a hymn to Christ, as to a god, and bound themselves by a solemn oath, not to any wicked deeds.

Pliny was the governor of Pontus and Bithynia. He was writing to Emperor Trajan asking advice on how to put down the outbreak of Christians under his governorship. Here we have a hostile source noting that Christians met on a certain fixed day of the week.

“I was in the Spirit on the Lord’s day.”

This gives the impression that John’s readers were already familiar with what the Lord’s Day is, since no further explanation is given.

“On the first day of every week, each of you is to put something aside and store it up, as he may prosper so that there will be no collecting when I come.”

It’s assumed here that the Corinthians were in the habit of meeting on the first day of the week, which suggests the custom dates before Paul wrote his epistle.

“On the first day of the week, when we were gathered together to break bread.”

Here we find Paul celebrating this tradition himself with the Christians in Troas, which included the Lord’s Supper. Troas is about a week’s journey from Corinth on foot, so this shows this custom was a Christian thing and not just a Corinthian thing.

Whew! That’s a lot of data. And Maclear could multiply quotes from Origen, Ignatius, the Didache and more. But the point is already well made. This was an early tradition that was practiced by the early Christians all over the Roman empire.

Swinburne suggests that this was a tradition that started in Jerusalem. After the scattering of the church due to persecution in Acts 8, Christians took their customs of celebrating the Lord’s Day and the Lord’s Supper to the world. But we hear no disputes about when or how to celebrate as we see with debates over circumcision or eating sacrificial meat that was resolved in the Jerusalem Council. (Acts 15) This indicates that this tradition just went on without question.

The Jewishness of Paul and John

Paul was radically Jewish. He had impeccable credentials: circumcised on the eight-day, an Israelite, a Benjamite, a Pharisee, and blameless when it came to keeping the Law. (Philippians 3:3-6) This, of course, would’ve included Sabbath-keeping.

Christians throughout the centuries have debated which John wrote Revelation. Was it John the Son of Zebedee or some other early Christian prophet? Regardless, few would challenge the writer’s Jewish background. His writings and imagery are deeply steeped in Old Testament prophecy and apocalypse.

Despite the obvious Jewishness of these two men, they and other devout Jews started to worship on Sundays. Maclear notes that the return from the captivity marked the rise of the Puritan period for the Jews. They were aware of the punishments the prophets pronounced for neglecting the Sabbath. (Is. 58:13-14, Jer. 17:21-27, Ezek 20:12-24).

According to the first-century Jewish historian Josephus, the Jews were famous for Sabbath-keeping throughout the world. “There is not any city of the Grecians, nor any of the Barbarians, nor any nation whatsoever, whither our custom of resting on the seventh day hath not come!” (Against Apion, 2.280)

And we see over and over in the Gospels just how fanatical the Pharisees were about keeping the Sabbath. On top of all that, we know from Josephus that the Jews of this time were also very dogmatic against anything that appeared to be idol worship, as their Roman leaders often found out the hard way. (For just a couple of examples, see Antiquities 17.6.2 or Jewish War 2.169-174.)

In light of these facts, Maclear writes: “That such a revolution of sentiment should have emanated from such soil of Judaism is startling. It calls for some adequate explanation consistent with its occurrence at the time it did, and at a historical epoch of which we can assign the date.”

A Day Named After a Person

Maclear notes that there are many Jewish festivals and observances that remember miracles and deliverances, such as the Passover, Hanukkah or Purim. But there’s not one commemorating a person, no matter how significant they are in Jewish history.

There’s not a special day for Abraham. Not for Moses. Not for David or for Judas Maccabeus. But here we have early Christian Jews dedicating the first day each week to a person. And not just any person, but a person they attributed the divine name. Something radical was happening here.

Driving it home, Maclear writes that

artlessly, fearlessly (John) mentions (the Lord’s Day) in the most incidental manner. The expression falls from his pen so casually and unconsciously that we almost forget what it implies. The boldness of the claim made for the day, that it could be connected with a Person, and that He could be for some reason entitled to the “ineffable Name” which his countrymen could not even pronounce, passes all conception.

So who is this person? Jesus, who was crucified. We know from Tacitus (Annals 15.44) and the New Testament documents that Jesus was crucified. No credible historian contests this. His disciples’ hopes were deflated at his death.

But soon their attitude shifted. They went from hiding in fear to later becoming bold proclaimers that Jesus was alive. Then there’s Paul, who went from church persecutor to apostle. Smack dab in Jerusalem where Jesus was executed, we have Sabbath-keeping Jews begin to now worship on the first day of the week. And to top it off, this celebratory day is given to a person who had been given the divine name and the honors that go with along with it. What could possibly account for this dramatic change?

it can be accounted for neither by an imaginary death nor by a visionary resurrection. A visionary resurrection runs up in the last analysis into a fraudulent resurrection, connived at by the most passionate teacher of the duty of veracity. The observance of this day is too solid a fact to repose on the foundation of mist. A “splendid guess,” a “vague but loving hope,” the dream of enthusiasts, the vision of credulous disciples — these will not account for an objective fact as indubitable as the institution and continued observance through so many centuries of a day so peculiarly designated as the Lord’s day.

Here’s how Maclear sums it up: The resurrection alone explains how it came to pass that the Lord’s Day …

And what’s interesting is this evidence confirms the particularity and specifics of apostolic testimony — that is, that they believed they encountered the risen Jesus on a specific day of the week after his crucifixion.

There is no plausible origin of the sacredness of Sunday from outside Christianity. There is only one simple explanation of this universal custom, which … must derive at the latest from the first two or three post-Resurrection years. The Eucharist was celebrated on a Sunday (and Sunday had theological significance) from the first years of Christianity because Christians believed that the central Christian event of the Resurrection occurred on a Sunday. Yet such early practice would have included that of the Eleven themselves, and so could only go with a belief of theirs that Christians had seen either the empty tomb or the risen Jesus on the first Easter Sunday. This shows that the visit to the tomb on Easter Sunday was not a late invention read back into history to make sense of the appearances but a separately authenticated incident.

So the next time you see Chick-Fil-A closed on a Sunday, it’s because Jesus rose for us. He’s our number one, with the lemonade. (Sorry, I couldn’t resist making at least one Kanye reference.) For the believer, every Sunday is Easter.

Get Maclear’s essay for free here.