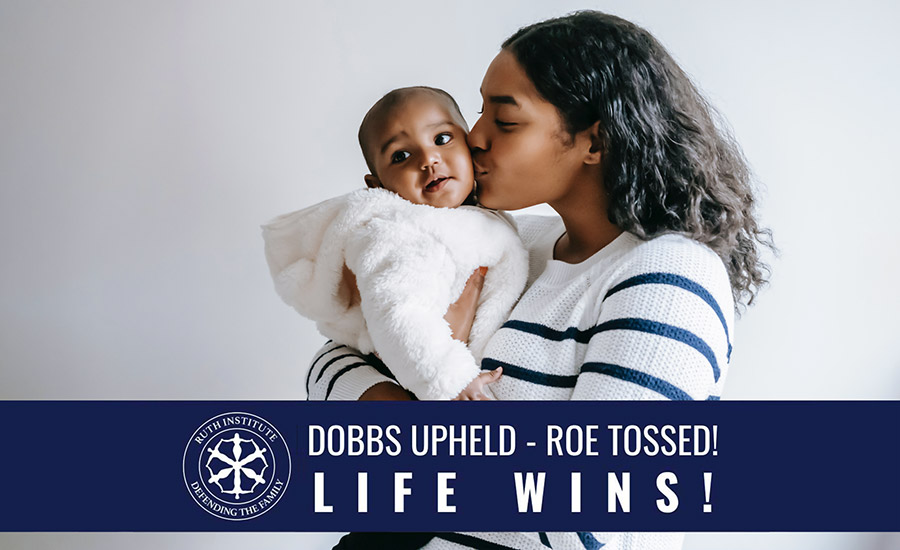 The Ruth Institute’s Summit for Survivors of the Sexual Revolution took place this past weekend. It was a fantastic event, kicked off with the news of Roe v. Wade being overturned.

Can you imagine the roar of applause in the room? The tears of joy? The hands held up in thanksgiving?

Then we said prayers of protection for the justices and prominent members of the pro-life community.

One of those prominent pro-lifers was Kristan Hawkins, president of Students for Life of America, who was to be our keynote speaker that night. She was understandably needed at her headquarters in D.C. but joined us virtually, explaining the abuse she had received that day and her need for an armed bodyguard.

As you know, our fight is far from over. And not just in the realm of abortion. There are many social issues where we need to push back against political correctness and the perceived status quo. We can say, “Oh well, giving kids puberty blockers and cutting off healthy body parts is just the norm now. Nothing we can do about it. Some people say they were born gay. I guess we should just affirm them. We don’t need to be concerned that same sex ‘marriage’ is destroying the sanctity of real marriage.

We just need to accept it and move on. Kids are resilient and don’t care if their parents take on new lovers. I’ll just ignore the statistics of child abuse in these instances. Children should allow their parents to have the love lives they want and just be quiet about it. They’ll be fine. Just as good as children from intact families. It’ll all be okay. I can just ignore the destruction of society. I don’t need to get involved.”

You can watch what the speakers at our Survivors Summit have to say. They know better. They were gay or lesbian. They were attempting to live as the opposite sex. They were conceived in rape and nearly aborted. They were abused. They were made aware of the insidious trans agenda being pushed in their child’s school.

And, you know what? They fought back. They didn’t simply accept it and ignore the problems in the world and in their lives. They know and speak the truth.

And you can too.

It’s time to pull your head out of the sand. Educate yourself. Be convicted of the seriousness of what we face. Become an advocate for truth.

Virtual Passes are still available after the fact. Get one now and receive the links to the raw footage from both days of the Summit.

Watch this Dr. J Show for clips of what our speakers have said on these issues.

It’s never too late to get started. Learn how with the first step of getting your Virtual Pass here.