Cecile Richards to Testify Before Congress

By Rachel Stoltzfoos Published on September 23, 2015 •

Planned Parenthood President Cecile Richards will testify before Congress next week about the non-profit’s use of taxpayer funds, as the investigation into its fetal tissue harvesting continues.

The purpose of the House Oversight Committee hearing is to determine how Planned Parenthood uses half a billion taxpayer dollars each year. Richards is scheduled to testify Tuesday.

Planned Parenthood is facing a congressional investigation and the possible loss of federal funds, after the Center for Medical Progress released a series of videos in which top Planned Parenthood doctors discuss harvesting and selling tissue from aborted fetuses.

Some Republicans say they’re willing to shutdown the government to strip the group’s funding.

Planned Parenthood supporters say it’s ridiculous to defund the organization because it’s focused on women’s health and by law cannot use taxpayer funds to perform abortions, but critics are, of course, skeptical on both counts.

More than $500 million of state and federal funds make up about 40 percent of Planned Parenthood’s annual revenue, a recent analysis of Planned Parenthood and federal data by Americans United for Life found. The Congressional Budget Office estimates $450 million of that is federal funding, nearly all of which is from programs administered by the Department of Health and Human Services. 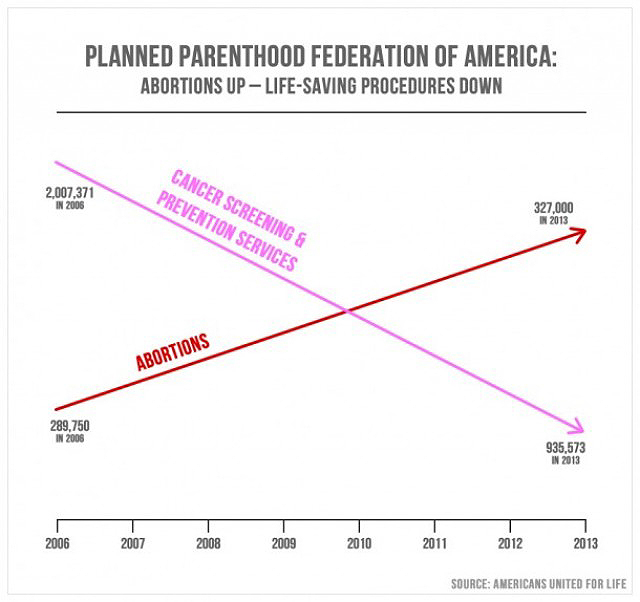 Although the national demand for abortions is declining, nearly 1 in 3 abortions happen at a Planned Parenthood clinic. In 2013, the clinics performed a total of 327,653 abortions.

The House voted to defund Planned Parenthood last week in response to the videos, but Senate Democrats blocked the bill. McConnell says he won’t allow a shutdown over the matter.