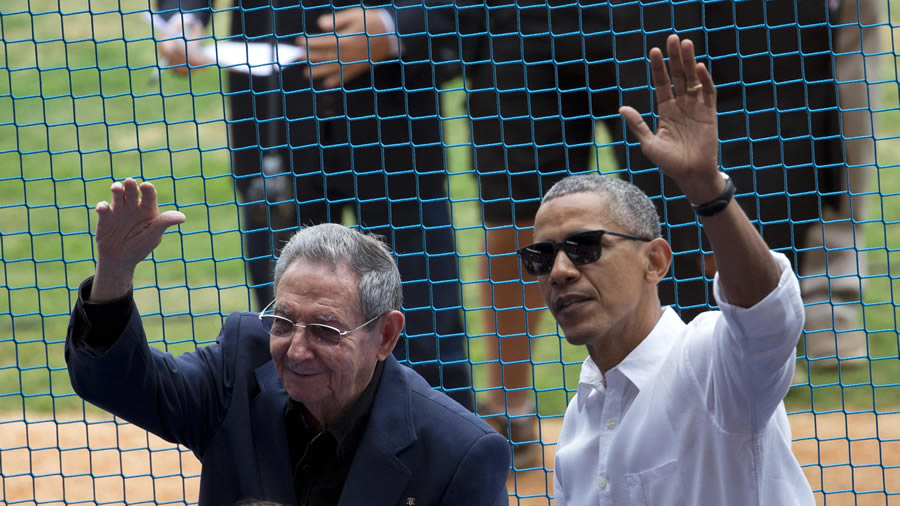 U.S. President Barack Obama, right, and his Cuban counterpart Raul Castro wave to cheering fans as they arrive for a baseball game between the Tampa Bay Rays and the Cuban national baseball team, in Havana, Cuba, Tuesday, March 22, 2016.

The Castro regime threw Dr. Oscar Biscet in jail in the late 1990s for speaking out against the Cuban practice of aborting late-term fetuses and in some cases murdering babies moments after their birth.

Biscet told a large audience at the Annual Commemoration Of Communism’s 100 Million Victims June 10 the Castro regime used “state terror” against him for “raising my voice for unborn children and the freedom of the Cuban people.”

Detailing the grisly details of his captivity, he told the audience that Castro’s regime had on separate occasions beaten him unconscious, broken in many of his teeth, put out lit cigarettes on his skin, and fractured his feet. All this treatment “for simply saying long live human rights.”

After serving a three-year sentence for ostensibly displaying Cuba’s flag upside down, he was rearrested shortly afterward and sentenced to another 25 years in prison, his translator Mr. John Suarez told The Daily Caller News Foundation.

There have been thousands of arbitrary political arrests in Cuba since the announcement of President Barack Obama’s restoration of relations with the communist republic, Marion Smith the Executive Director of the Victims of Communism Memorial Foundation told TheDCNF.

Smith further elaborated that, “the Government of Cuba is a corrupt illegitimate regime.” Smith believes Obama’s restoration of relations with Cuba has provided new capital infusions to the Castro regime. The Obama administration has hailed the visits of US tourists to Cuba as a way to provide a cash infusion to the local ailing economy.

Smith told the DCNF over 90% of this money is directly “bailing out” the Cuban military and the Castro Regime. Furthermore, political prisoners are still receiving much the same treatment Dr. Biscet suffered at the hands of the Castro regime, he said.

Mere hours before Obama’s March 21 arrival in Havana, Cuba arrested nearly 50 political prisoners protesting the Castro regime. The protestors were of the organization the Ladies in White, made up of spouses and family members of political prisoners. The protestors often staged non-violent protests after Sunday Mass and many still had palms on their hands from Church at the time of their arrest.

In early March, U.S. Secretary of State John Kerry had to cancel a planned trip to Cuba over a disagreement on the nature of a planned human rights dialogue. The Castro regime has insisted the structure of the political regime will remain along with “the socialist nature of the revolution,” despite the opening of relations with the U.S.

Some experts like Smith believe that the Obama administrations restoration of relations with Cuba has in fact made it stronger. By providing capital infusions and legitimizing the Castro regime on the world stage, President Obama may in fact have extended the rule of Communism over Cuba.

Going the Wrong Direction: Abortion and Same-Sex Marriage to Be Legalized in Northern Ireland