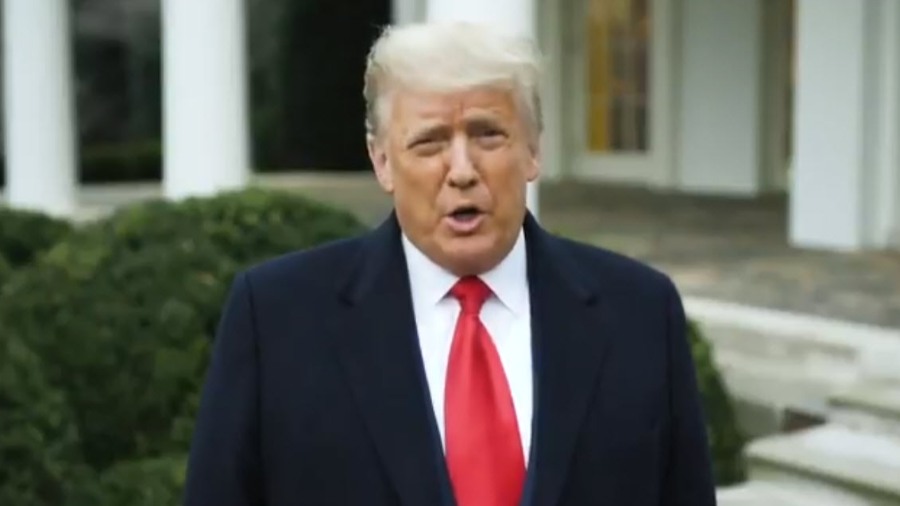 Update from editor: In a video President Trump said: “I know how you feel, but go home and go home in peace.”

Hundreds of protesters loyal to President Donald Trump made their way into the Capitol building Wednesday afternoon, interrupting lawmakers’ debate of the presidential election results and forcing the evacuation of Vice President Mike Pence as Capitol Police struggled to contain the situation.

Police had moved to block thousands of pro-Trump protesters from getting too close to the Capitol as lawmakers debated objections to a Electoral College count that would make Joe Biden the 46th president of the United States.

News footage showed protesters climbing the exterior walls of the Capitol and moving freely through the building.

This violence is unacceptable and needs to be met with the full force of the law.

God bless the Capitol Police who are keeping us safe.

“I’ve never seen a group of protesters lay siege to the Capitol building,” Fox News Channel anchor Bret Baier said about 2:50 p.m. as reporters said police were concerned about the Senate and House chambers being breached.

Shortly after 2 p.m., police “locked down” the Capitol in an effort to control the situation, Fox News Channel reported. Members of the House and Senate were expected to “shelter in place” while not being allowed to move about freely, Fox reported.

I am in the House Chambers. We have been instructed to lie down on the floor and put on our gas masks. Chamber security and Capitol Police have their guns drawn as protesters bang on the front door of the chamber.

This is not a protest. This is an attack on America.

Police also temporarily evacuated at least one House office building after reports of one or more suspicious packages.

After hearing Trump speak earlier on the Ellipse, a park south of the White House, many of the president’s supporters marched over a mile to the Capitol grounds.

Capitol Police reportedly fired flash-bang grenades and some sort of gas at those who tried to get past barriers.

Inside, the House and Senate were hearing representatives and senators cite evidence of voter fraud and election irregularities in objecting to Electoral College votes for Biden from electors in Arizona, Georgia, and Pennsylvania.

Televised images at about 2:15 p.m. showed protesters moving up outside stairways and approaching the west front of the Capitol, which normally is off-limits, Fox reported.

I fundamentally believe that everyone has the right to peacefully protest and exercise their First Amendment rights. But let me be clear: storming the Capitol steps, breaking police barricades, and disobeying law enforcement orders are not the same thing.

Congressmen ordered to grab gas masks under chairs in case have to leave in haste!

An aide to Sen. James Lankford (R-OK) is heard telling him "Protesters are in the building," as joint Congress meeting abruptly enters recess while pro-Trump protesters storm the U.S. Capitol https://t.co/wTKxzqAo9U pic.twitter.com/0MBGdSNNXo

Not a good idea.

"the mob has overtaken the process … security here at the US Capitol has failed" pic.twitter.com/f01D6ZlukK

Calls grew for Trump to clearly call for an end to the trespassing and violence at the Capitol after he used Twitter to urge supporters to be peaceful and not hurt Capitol Police and other authorities.

I am asking for everyone at the U.S. Capitol to remain peaceful. No violence! Remember, WE are the Party of Law & Order – respect the Law and our great men and women in Blue. Thank you!

Please support our Capitol Police and Law Enforcement. They are truly on the side of our Country. Stay peaceful!

Just after 4 p.m., Biden went on camera to call for Trump to address the nation on television and insist on order.

Editor’s Note: Paul Sperry of RealClearInvestigations reported Wednesday afternoon:  “Former FBI agent on the ground at U.S. Capitol just texted me and confirmed that at least 1 “bus load” of Antifa thugs infiltrated peaceful Trump demonstrators as part of a false Trump flag ops.” Could this be an example?

Eyewitness who saw the first individuals storm the Capitol building said they were “sketchy and all padded up”.

“We’ve been here all morning, and it has been very peaceful. Suddenly these guys showed up and immediately stormed it.” pic.twitter.com/ev6PCF5Oko

Ken McIntyre, a 30-year veteran of national and local newspapers, serves as senior editor at The Daily Signal and The Heritage Foundation’s Marilyn and Fred Guardabassi Fellow in Media and Public Policy Studies. Send an email to Ken. Follow him on Twitter @KenMac55.