Judge reads aloud hour-long list of his reasons at court session. Great news — though still a lot of concerns. 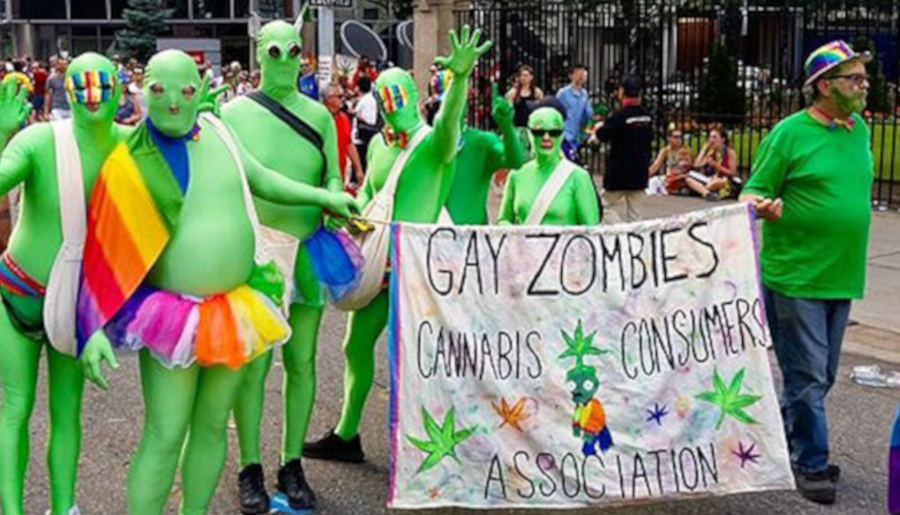 The "Gay Zombies" marching in the 2016 Toronto Gay Pride Parade. A contingent of naked men right behind them has been cropped out.

By MassResistance Published on December 13, 2021 •

After 5 years of enormous effort and expense by the Canadian government (and the LGBT movement) to arrest, convict, and punish Bill Whatcott, he has been declared not guilty!

Friday at 11:00 a.m., Judge Robert Goldstein convened his courtroom in Toronto. He read aloud his prepared document outlining the reasons for his findings and announced his verdict. MassResistance staff and others were able to attend via Zoom. It took the judge over an hour to read his judgement to the Court. It will be available to the public early next week in written form with footnotes. At that point we will do a more thorough analysis of how this affects free speech in Canada (and possibly elsewhere eventually).

At the 2016 Toronto Gay Pride Parade, Bill and some friends dressed up in green “Gay Zombie” costumes, marched in the parade, and passed out pamphlets to the crowd containing religious messages and warnings about the dangers of homosexual sex. The Attorney General of Ottawa (“the Crown”) charged that the pamphlet consisted of criminal “hate speech” and was seeking an 18-month prison term for Bill. Luckily, Bill was represented by John Rosen, widely considered the most prominent criminal defense attorney in Canada.

The Judge’s decision concludes a grueling eight-day trial in October to determine whether or not the flyer legally constituted “hate speech.” (See MassResistance’s detailed reports here.)

At a time when hundreds of actual criminal trials across Canada were simply being dismissed because of COVID, the Crown strongly insisted that this case (about a flyer!) continue, and put an unusually large amount of energy and expense into pursuing it. According to one source, the government spent over $1 million on this effort. But with Attorney Rosen, Bill got a “million-dollar” defense at no cost to him.

During the trial, the Crown brought in an infectious disease physician to argue that the flyer’s medical statistics were wrong. Attorney Rosen brought in a Professor of Theology and Ethics at McGill University to show that the flyer’s use of Bible verses and concepts were theologically legitimate.

‘Reasonable Doubt’ — So Not Guilty

In his brilliant cross-examination of the Crown’s medical expert, Rosen was able to get her to admit that the flyer’s statistics were actually in the range of probability — not perfect, but not far off. And by the way she disdained opposing studies, Rosen also persuaded the Judge that she was a biased advocate against Bill’s position.

The theology professor was very persuasive that the flyer’s incorporation of religious elements was basically in line with Christian understanding, and the Crown’s attorney was not able to punch any holes in that.

In addition, the judge observed that an instrument truly intending to promote “hatred against gays” would not be distributed to people at a gay pride event.

Finally, the judge referred to the flyer as “obnoxious” and “offensive” but said there was a lot of “reasonable doubt” that it constituted “hate speech” in the legal sense as defined in Canada.

Thus, the flyer is not “hate speech” and Bill is not guilty.

Luckily for Bill, Judge Goldstein appears to have a modicum of common sense, which is extremely unusual, especially in Canada. He did not reflexively follow the virulent anti-Christian hysteria that we’ve seen from other Canadian judges.

But even though Bill is a free man, this was still very frightening. The judge buys into the absurd concepts and propaganda of the LGBT movement. The fact that the 2016 Toronto Gay Pride was a disgusting, profane display of men marching naked in front of children got no mention; Judge Goldstein called the parade a “celebration.” He also went through layers of Canadian “case law” to crystallize the various legal definitions of “hate speech” — which should be terrifying to any free society. And he referred to the Bible as if it were a kind of foreign document, rather than the basis of Western legal thinking.

We will cover all of this in our upcoming analysis of Judge Goldstein’s written opinion. 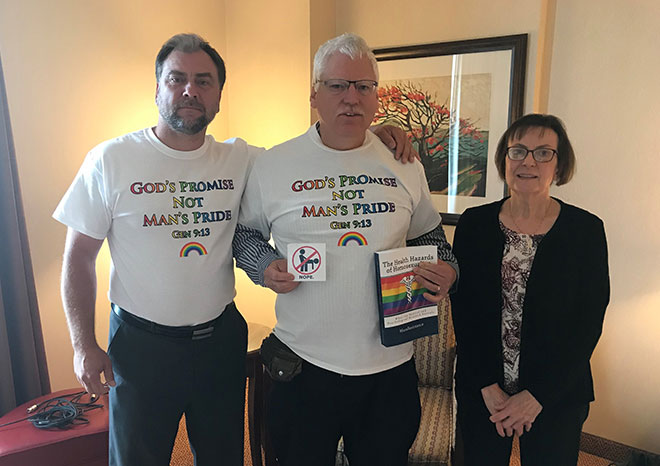 Bill Whatcott (center) with well-known Canadian Pastor Artur Pawlowski and MassResistance researcher Amy Contrada, on the day he turned himself in to the Toronto police.