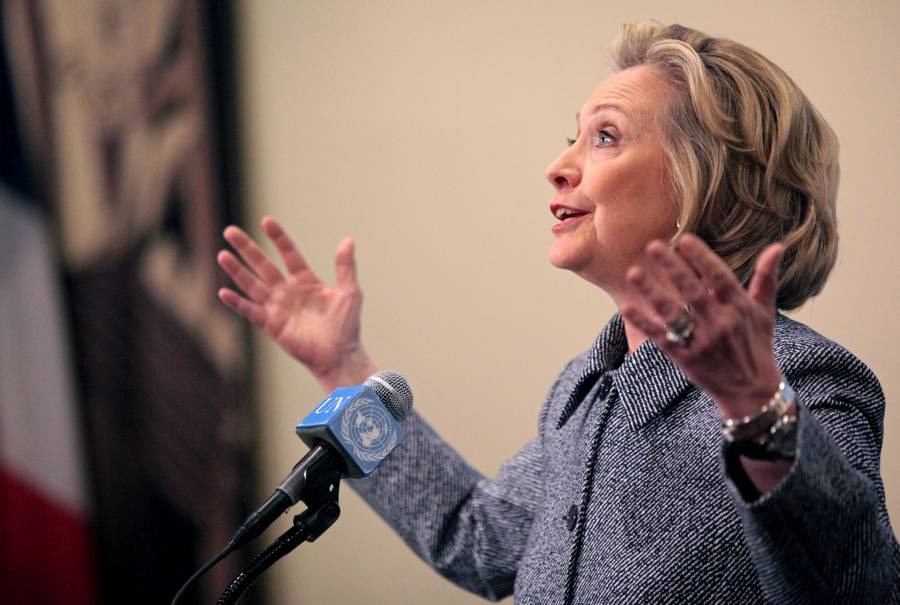 When Hillary Clinton lost to Barack Obama in 2008, the idea of scoring a first for women was trumped by the appeal of electing the first black president. She was a senator then and didn’t want to emphasize the differences in men and women in their approach to making policy.

This time, you’ll hear Clinton use the word “grandmother” frequently in her speeches, even if she has to deal with how much older she is than the younger Republican candidates. The very appearance of Sen. Marco Rubio, age 44 (just the age of John F. Kennedy when he was elected in 1960) emphasizes how Clinton, at 67, seems so yesterday, and he’s so the future. There’s no place for Clinton to go other than to acknowledge her age as experience, and emphasize the homely virtues that come with “grandmotherliness.”

“I may not be the youngest candidate in this race,” Clinton has said more than once. “But I will be the youngest woman president in the history of the United States. And the first grandmother as well.” Cracking a joke about her hair not turning white in office because she colors it has limited appeal, especially for millennial voters who grew up when purple and orange hair made statements of defiant independence.

Besides, the idea of the “first woman” in the Oval Office no longer packs the punch it once did. Women “lean in” in many different positions of leadership. They make up majorities in top professional schools of law and medicine. Last week two women broke through competitive physical barriers, graduating from the rigorous training of U.S. Army Ranger School, with a certificate saying they met the same standards as men. Clinton no doubt once thought her tenure as secretary of state would neutralize the gender issue and neutralize her lack of military strategic experience. Her stumble on Benghazi fixed that, though not the way she wanted.

Carly Fiorina, the onetime CEO of a major technology corporation and one of the pack in pursuit of the Republican nomination, told Chuck Todd of NBC that she is indebted to Clinton for breaking the ice for women, but gives her nothing else. She insisted she’s not trustworthy: “Benghazi, her emails, her server.” The ice has melted into puddles around her feet.

Early 20th century feminists touted their moral superiority to men, but that’s not an argument Clinton can use. Her strongest dimension has been intelligence, but she sounded stereotypically ditzy when reporters asked whether she had wiped her server clean, and she replied that she didn’t know what that meant. “Like with a cloth or something?” She was just the little lady who wouldn’t know about guy things. “I don’t know how it works digitally at all.” Given her reputation for paying close attention to detail, this was no time to be cute. Maybe she doesn’t know how “classified” or “top secret” works, either.

The former first lady, former senator from New York and former secretary of state nevertheless holds historic appeal as the prospective first woman president –or FWP, as her fans tweet. She has been in the limelight on stage for so long that her “first woman” ambitions have been dimmed by a short circuit of trust.

Vice President Joe Biden, reading her declining approval ratings as if they were tea leaves, probably can’t resist the temptation to enter the Democratic lists. He’s got his own baggage, and at 73 (in November) he won’t look so lean and lithe against one of those young Republicans, either. With Donald Trump sucking up the oxygen in the room if not the house, it’s hard to see either the Donald or the Stone Lady dominating either convention.

Marco Rubio and John Kasich have continued to make ripples, if not yet waves. The senator from Florida sounds authentic as the son of hardworking legal immigrants from Cuba, a strong counterweight to the Donald’s mean-spirited attacks on “birthright citizens.” The governor of Ohio, a “compassionate conservative” without wrapping himself around that awkward label, tells The New York Times that he has no intention of altering his strategy against Trump. “Pandering is the worst thing you can do in politics,” he said. He prefers to talk about America’s responsibility to those in the shadows — the mentally ill, those with disabilities and minorities struggling to redeem the dream. The miracle of America, he has said, as if echoing Ronald Reagan, “doesn’t just apply to the few.”

These men broaden their conservative message as Clinton narrows her liberal one. Is anybody listening? It’s too soon to know. The campaign that hasn’t started yet continues to roar.