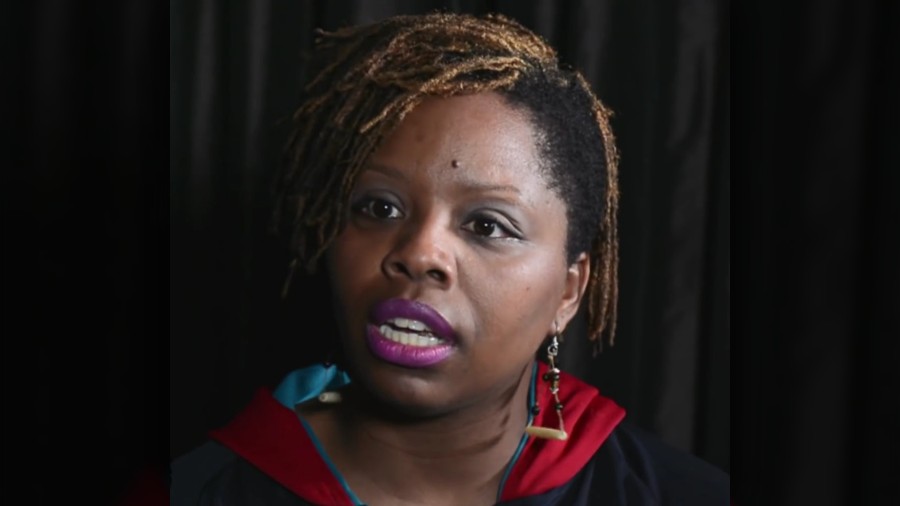 Black Lives Matter co-founder Patrisse Cullors also started and is chairwoman of Los Angeles-based Dignity and Power Now. In this screenshot from a YouTube video published May 19, 2015, Cullors is pictured speaking on The Laura Flanders Show.

In September and again in February and March, the California Attorney General’s Office notified Cullors’ organization, Dignity and Power Now, that it was delinquent in filing the financial information, according to documents obtained by The Daily Signal.

“A delinquent organization may not engage in any activity for which registration is required, including solicitation or disbursing of charitable assets,” reads the February letter to Cullors’ organization from California’s Registry of Charitable Trusts.

At the time, Dignity and Power Now had not submitted all required information for 2017 and 2019.

The California Attorney General’s Office provided The Daily Signal with a copy of the March notice sent to Dignity and Power Now and confirmed the authenticity of the February and September notices.

Cullors founded the Los Angeles-based organization to promote prison reform in 2012. She continues to be listed as chairwoman of the organization.

It wasn’t until 2013 that Cullors began using the phrase and hashtag #BlackLivesMatter in connection with the Trayvon Martin case in Florida. She is one of the co-founders of the Black Lives Matter Global Network Foundation, the largest organization in the BLM movement.

Dignity and Power Now submitted some but not all required information required on the state’s Registration Renewal Fee Report, or RRF-1, according to the California Attorney General’s Office.

“The delinquency notice was submitted to Dignity [and] Power Now because they failed to file their RRF-1 for the year 2017,” a spokesperson for the office told The Daily Signal in an email. “The registry has since received the missing report, but there are still problems with the charity’s 2019 filings.”

A spokesperson for Dignity and Power Now did not respond to The Daily Signal’s phone and email inquiries Friday, Monday, and Tuesday.

While California’s attorney general awaits certain 2019 financial documents, the group’s so-called 990 filing with the Internal Revenue Service offers a glimpse of its size and reach.

Each of California’s three notifications to Dignity and Power Now used the name of then-California Attorney General Xavier Becerra in the letterhead. Since March 19, Becerra has been President Joe Biden’s secretary of health and human services.

The state’s most recent delinquency notice, dated March 16, told Cullors’ organization that its submitted form for fiscal 2019 “is incomplete” because a “current authorized officer” had not signed it and because “an independent audit was required” under state law.

The California Attorney General’s Office gave The Daily Signal a copy of the March letter. The National Legal and Policy Center provided the previous letters, one dated Sept. 4 and the other Feb. 2, to The Daily Signal.

The state’s Feb. 2 letter — before Cullors’ group provided the 2017 financial information — is firmly worded. It warns that the state could revoke the group’s tax-exempt status and impose fines on its staff that could not be paid out of the organization’s treasury.

The organization had to provide the information within 60 days, the state’s notice said, or:

2. Late fees will be imposed by the Registry of Charitable Trusts for each month or partial month for which the report(s) are delinquent. Directors, trustees, officers and return preparers responsible for failure to timely file these reports are also personally liable for payment of all late fees.

The Virginia-based National Legal and Policy Center, which tracks nonprofits, monitors the finances of nonprofit groups associated with Cullors. NLPC Chairman Peter Flaherty said it is important to know where the money from these organizations is going.

“We feel the public deserve a full accounting of how much money the charity has received over the years, where the money went, and what the charity did, if anything, with the millions in cash it has apparently received,” Flaherty told The Daily Signal in a prepared statement.

The more than $2 million in revenue that Dignity and Power Now reported for 2019 is a marked financial improvement from previous years.

As chairwoman of Dignity and Power Now’s board of directors, Cullors does not collect a salary. The highest-paid person on staff is Managing Director Lamia El-Sadek, who was paid $159,994 in 2019, according to the IRS filing.