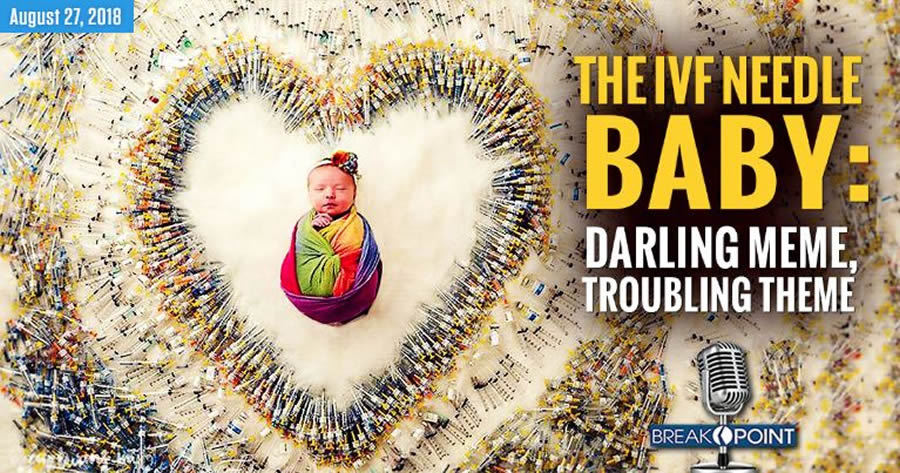 Everybody loves pictures of adorable babies wrapped in blankets, sleeping peacefully, right? But not this picture — it should break our hearts, not melt them.

Life today on social media includes the phrase “X went viral.” The rapid sharing of images, videos, and phrases can spread ideas that shape our cultural imaginations in a way similar to how illnesses, such as the flu, can spread from one person to another with terrifying speed.

And like a disease, even a seemingly innocent image that goes “viral” can be harmful.

A very recent example is a picture of a baby wrapped in a rainbow-colored blanket surrounded by 1,616 hypodermic needles arranged in the shape of a heart. The photo was shared on social media by the child’s same-sex parents, Patricia and Kimberly O’Neill. The image, the couple said, “represent(ed) [their] journey,” which included “4 years, 7 [IVF] attempts, 3 miscarriages and 1,616 shots.”

Of course, the most common response to the picture was “aww!” and a heart-shaped emoticon. But all the likes in the world cannot dispel the incredibly important ethical questions that are raised by the story behind the photo, ethical dilemmas we’ve not even fully acknowledged in our cultural moment, much less settled.

The first dilemma has to do with in-vitro fertilization itself. As we’ve said repeatedly on BreakPoint in recent months, there are significant moral questions raised by artificial reproductive technologies such as IVF. For example, the destruction of human life that is, in most cases at least, part of the process; the fate of nearly one million frozen “excess” embryos; the moral consequences of separating reproduction from sex. To pretend that IVF and other reproductive technologies are morally neutral is to ignore obvious realities.

By arranging the needles in the shape of a heart, the photographer, consciously or not, obscured just how messy and morally fraught the IVF process really is. If the needles had been arranged in their “natural” state, just lying around on a cold medical table or discarded in a medical waste bin — the message would have more accurately reflected the confused reality we live in.

Not only are the ethical questions created by the technology buried by this picture, so are the culture-wide assumptions that animate our current technologies. I often talk about how marriage, sex, and babies are a “package” deal as created by God and recognized throughout human history until just recently. The main idea of the sexual revolution has been to divorce sex, marriage and babies.

Of course, same-sex unions are inherently infertile. And yet, in many cases it is same-sex couples driving the demand for the technologies that bypass sex in the process of creating life. Unintentional infertility is tragic. Demanding children after choosing an intentionally infertile relationship is hubris and fundamentally redefines our understanding of children as a gift, not a consumer product.

Now, I know that pointing out problems with this cute photograph will sound grumpy and heartless. So let me be clear: I’m sure the couple loves their new daughter very much. The problem isn’t the baby; the problem is the ideas that made the story, that led to this picture.

From Black Friday to Advent: Have a Merry (Offline) Christmas