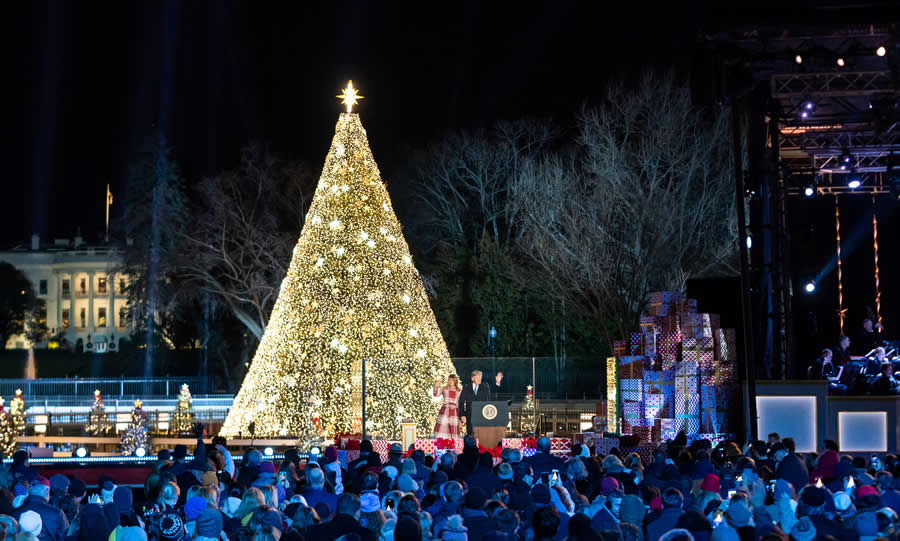 America isn’t the only thing making a comeback under President Donald Trump — so is Christmas! The candidate who vowed, “We’re gonna be saying ‘Merry Christmas’ again,” delivered on that promise again in a big way Thursday night. Thirty feet of big, to be exact. In front of the giant spruce, the president made it very clear that this event wasn’t about illuminating the tree — but shining a light on the real reason for the season.

In a speech that no one would mistake for former President Barack Obama’s, the president talked about the wise men coming to worship Jesus.

Christians give thanks that the Son of God came into the world to save humanity. Jesus Christ inspires us to love one another with hearts full of generosity and grace … As one grateful nation, we praise the joy of family, the blessings of freedom, and the miracle of Christmas.

His words were a breathtaking departure from Christmases past, which were full of nothing but the pageant of political correctness.

To millions of Americans, Trump hasn’t just tapped into the frustration they feel about Christmas, but the mockery of the values they hold dear. And he took another moment to prove it, intentionally recognizing the Salvation Army for its important work — despite the left’s latest attacks over its Christian roots.

After Chick-fil-A walked away from the group and the Cowboys almost lost their halftime show over the Red Kettle campaign, it matters that this president made a point of standing alongside the nonprofit. The message was subtle but clear: He isn’t caving to the cultural bullies, and Americans shouldn’t either.

To millions of Americans, Trump hasn’t just tapped into the frustration they feel about Christmas, but the mockery of the values they hold dear.

For the Salvation Army, the support couldn’t come at a better time. As Rich Lowry points out, the red kettles that used to be a sign of charity and goodwill are suddenly a symbol of liberal controversy.

“It takes a perverse worldview not to have fond feelings about this tradition, which is spectacularly successful on its own terms, raising almost $150 million a year.” But then, the left has never let “sentimentality interfere with their dictates.”

If you think that volunteering for an organization that is raising funds to provide food and housing, among many other services, for the needy is an inherently praiseworthy act, you haven’t been following the woke left-wing activists cutting a swath through American culture. Any institution, no matter how storied or how generous, is subject to a punitive campaign of social ostracism that is often highly effective. In today’s environment, what seems preposterous one moment is inevitable the next, and after one target is ground into submission, another is quickly found.

Fortunately, Trump doesn’t believe in surrender. And he’ll go to the mat to guarantee that Christian organizations like this one can continue serving Americans — for the same reason he’ll keep fighting the war on Christmas: because no one should ever have to compromise their faith in a country like ours.