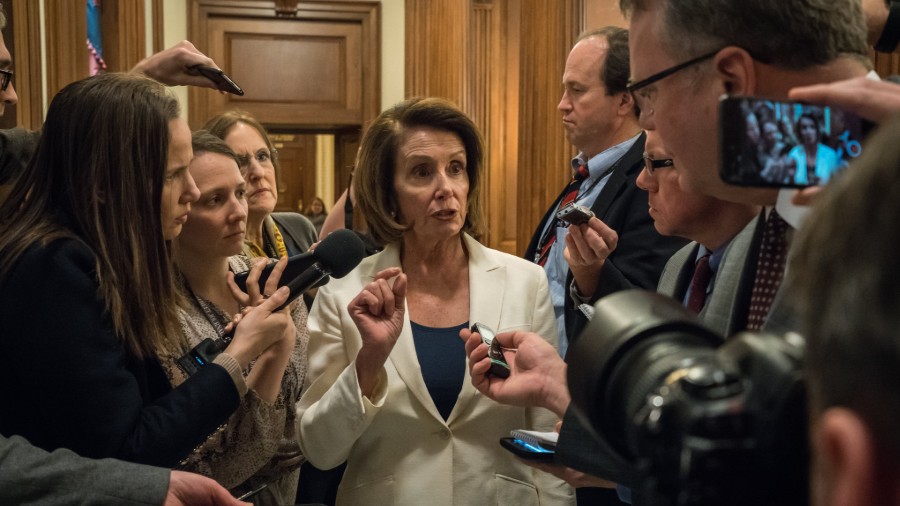 Right before the Democrat debate Tuesday night, House Speaker Nancy Pelosi announced that, for now, she would not be holding an official vote on whether to begin formal impeachment proceedings against President Trump. “We’re not here to call bluffs,” she said. “We’re here to find the truth to uphold the Constitution of the United States. This is not a game for us. This is deadly serious. And we are on a path that is, is getting — taking us to a path to truth and a timetable, uh, that respects, um…our Constitution.”

We get it: Nancy is all about the Constitution. (I’ll pause for a few moments while you fall to the floor laughing.) So, hey, if Democrats are for impeachment — and the Democrat candidates in Tuesday’s debate said they were for it — why isn’t Pelosi moving forward with formal proceedings? Aside from probably not having the votes for it to pass, the answer is so obvious, I hardly feel the need to point it out, but I will anyway.

Right now, Pelosi is under a lot of pressure from the far-left “AOC branch” of Congress to impeach for any reason or no reason. But by skirting a formal inquiry with the bizarre sort of semi-inquiry they’re doing now, she also gets to run it as a “No-rules-for-me-my-rules-for-you” process.

Official impeachment hearings have always been held in public, in front of the cameras, and congressional Republicans would have subpoena power and be able to call and cross-examine witnesses. Trump would actually have due process rights like other Americans!

But when Democrats got their great “whistleblower” idea, they had no idea that Trump would opt for transparency and release the transcript with Ukrainian President Zelensky, showing the “whistleblower” to be full of beans and the whole plot to be as phony as Adam Schiff’s lying “parody” of their phone conversation. (In breaking news, 135 House Republicans have co-sponsored a resolution to censure Schiff for doing it. Good luck with that, but at least they made a statement.) And now, Schiff is saying the “whistleblower” won’t be testifying.

No kidding — he doesn’t DARE let this person be questioned. We’d demand to know exactly how he or she coordinated with Schiff’s office, especially before the complaint was filed. And what this person was doing in the 18 days between that contact and the filing of the complaint. And why that contact was not disclosed on the official complaint form. According to Mark Meadows, “ …  What we’re finding is that Adam Schiff only wants to have witnesses who will give the response that he hopes that they will give, and even at that, it’s ‘a swing and a miss.’”

Why Nancy Won’t Hold a Vote

Brit Hume, talking with Tucker Carlson Tuesday night, said of Pelosi, “I frankly can’t think of a good reason from her point of view why [Pelosi] WOULD hold a vote.” First, he said, it exposes vulnerable Democrats from districts that Trump carried in 2016. “This way, she gets to get all the fruits of this peculiar investigation … and none of the downside.

They’re conducting a very unusual investigation. You look back to the Nixon impeachment — the most widely accepted impeachment inquiry we’ve ever had — it was overwhelmingly voted for. But in addition to that, the proceedings were very balanced, very fair. Nixon had his lawyers involved in the process. None of that is happening here. This is all being done behind closed doors…

Brit pointed out how effective the “Ukraine” scenario has been for Democrats, at least up to this point. Since they pivoted from “Russia” to “Ukraine,” the polls have shown much more public sentiment in favor of impeachment. It’s “a very effective thing that Pelosi and her colleagues have going in the House.”

How ironic, then, that the real Ukraine scandal is not anything Trump did but rather what officials there did to help Hillary in 2016. For example, the leaking of former Trump campaign director Paul Manafort’s “black book” of payments for Ukrainian lobbying.

Then we also have the extremely lucrative involvement of Joe Biden’s son Hunter in Ukrainian natural gas company Burisma and Joe’s threat to cut off $1 billion in aid to Ukraine if the prosecutor investigating Burisma wasn’t fired. Hunter definitely didn’t help his case when he went public Tuesday in an unfortunate appearance on Good Morning America. Even in this puffball interview, it was pitifully obvious that the only reason he would have been put on the Burisma board was that he was the Vice President’s son.

In breaking news Tuesday night, FOX News’ chief congressional correspondent Mike Emanuel reported that the White House has opened an internal probe into the handling of the Zelensky phone call, with some expressing the concern, “it could be a search for a scapegoat.”

Well, if he means finding the anonymous White House official who approached the anonymous “whistleblower” with off-the-rails “concerns” that turned out not to be true, they really should be looking for that person. But it seems to me that the person being targeted most right now by Trump’s adversaries is Rudy Giuliani. Giuliani is Trump’s personal attorney, but due process protections such as attorney-client privilege do not apply to this President or his associates because he’s Donald Trump.

Taibbi on the Bloodless Coup

This is just the latest twist in what truly is a “bloodless coup” to unseat the duly elected President of the United States. Anyone tempted to dismiss it as a right-wing conspiracy theory absolutely must read the article linked to below, by reporter Matt Taibbi. As you will see he doesn’t like or respect Donald Trump in the least but has an objective eye for power struggles and can see what is going on here.

He says that while our nation has been spared this kind of mad intrigue until now, that is changing before our eyes. As much as Taibbi doesn’t like Trump, he believes that the people who’ve been pushing the hardest to get rid of him from the beginning are worse. “Many Americans don’t see this because they’re not used to waking up in a country where you’re not sure who the President will be by nightfall,” he says.

Taibbi sees, for the first time, a “full-blown schism” between the intelligence community and the White House. He goes through the whole chain of events, including the January 2017 meeting of the intel chiefs with the President-elect to brief him on the most salacious part of the (unverified) Steele “dossier.”

He says the leaks from this meeting “without question damaged both the presidency and America’s standing abroad” and was “an unprecedented act of insubordination.” He explains how, by using a pattern of leaks and political pressure, the agencies have inserted themselves into domestic politics.

And now, with the Ukraine story, “it’s the same people beating the public drums, with the messaging run out of the same congressional committees, through the same Nadlers, Schiffs and Swalwells.” While he doesn’t give Trump enough credit for recognizing what’s been going in the “deep state,” and I think he’s shamefully wrong about what Trump would do if faced with his own ouster, Taibbi’s observations and warnings about this coup are spot-on. THIS IS A MUST-READ.