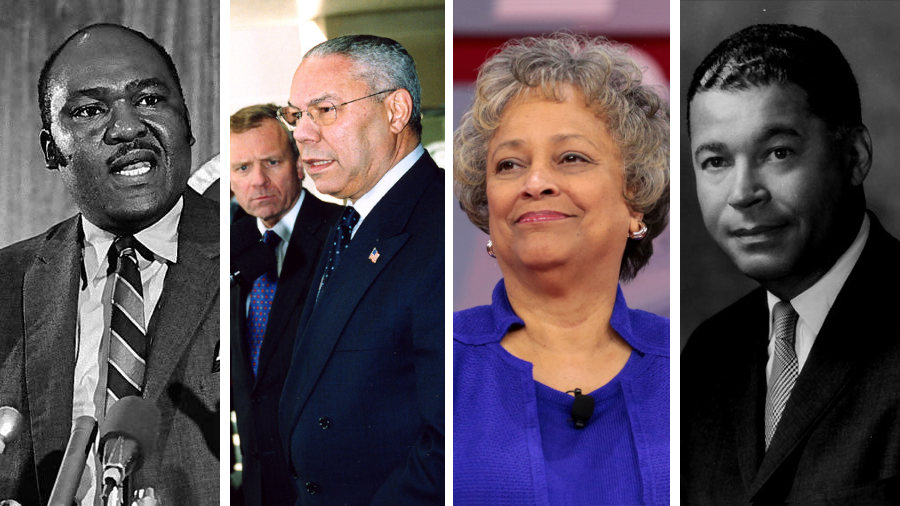 From left to right: Arthur Fletcher, the “father of affirmative action”; Colin Powell, the first black national security adviser and secretary of state; Kay Cole James, president of The Heritage Foundation; and Edward Brooke, the first black to be elected to the U.S. Senate by popular vote.

By Raynard Jackson Published on February 2, 2021 •

Conservatives are labeled constantly as racist both in the radical liberal media and within the black community. Some of the accusations are justified, but many aren’t supported by facts.

But because conservatives are incompetent in messaging, especially when it comes to the black community, oft-repeated radical liberal lies have become the truth.

These perceptions will begin to change when and only when conservatives begin to understand that they need to debunk these liberal lies by highlighting real black conservatives who have real credibility in the black community.

How many of you saw any of the House or Senate’s Republican leadership pay homage to Martin Luther King Jr.’s birthday last month? Or any of the major conservative groups?

February is Black History Month and I can guarantee that you will see or hear little about it from conservatives, because they don’t see the need to celebrate anything based on race.

To my conservative friends: Stop being stupid.

Spare me your speeches about how we are all Americans and we should all be colorblind. Have you ever stopped to think why blacks celebrate Black History Month and generally support racial preference programs?

Well, my good buddy King Solomon once told me in Proverbs 4:7: “Wisdom is the principal thing; therefore get wisdom; and with all thy getting, get understanding.”

So, let me help you understand why blacks celebrate Black History Month.

To this day, white liberals and conservatives alike have refused to include blacks’ contributions to America in their history books.

A black historian, Carter G. Woodson, began Black History Month in 1926. It actually started out as a week, but over time evolved into a month. Why February? Because it coincides with the birthdays of Abraham Lincoln (Feb. 12) and Frederick Douglass (traditionally, Feb. 14).

The reason we have Historically Black Colleges and Universities is because whites would not allow blacks to attend their schools. So, before you derisively dismiss these programs and institutions, at least acknowledge that the actions of the U.S. government created the necessity for them.

Republicans Did the Heavy Lifting on Civil Rights Act

One of the best-kept secrets of the past 60 years is that, proportionately, Republicans in Congress supported passage of the landmark 1964 Civil Rights Act by a much wider margin than Democrats.

Another interesting tidbit in CNN’s report:

Ohio’s Republican Rep. William McCulloch had a conservative track record–he opposed foreign and federal education aid and supported gun rights and school prayer. His district (the same one [later] represented by House Speaker John Boehner) had a small African American population. So, he had little to gain politically by supporting the Civil Rights Act.

Yet he became a critical leader in getting the bill passed. His ancestors opposed slavery even before the Civil War, and he’d made a deal with President Kennedy to see the bill through to passage.

CNN’s article also noted that McCulloch would tell fellow legislators, “The Constitution doesn’t say that whites alone shall have our most basic rights, but that we all shall have them.”

But you would not know any of this if you relied on the official ceremonies at the Lyndon B. Johnson Presidential Library in 2014 marking the 50th anniversary of the passage of the Civil Rights Act of 1964.

How can you hold a discussion of civil rights and not have one black Republican present? How could you not have Robert J. Brown, a top aide to President Richard Nixon and one of King’s closest confidants?

What about Sara J. Harper, a former judge on Ohio’s 8th District Court of Appeals? Harper is a member of the Ohio Civil Rights Hall of Fame. She was also the first black to graduate from Case Western Reserve University School of Law.

If the Johnson Library’s summit on the Civil Rights Act of 1964 were your sole source of information, you would think no black Republicans were involved in the civil rights movement.

Is it really that easy to overlook Colin Powell, the first black national security adviser and secretary of state? Really?

The Johnson Library had former Mississippi Gov. Haley Barbour, my good friend and a southern white male, as one of its speakers. So, they had white Republicans, but no black Republicans. Wow.

If the Johnson Library’s summit on the Civil Rights Act of 1964 were your sole source of information, you would think no black Republicans were involved in the civil rights movement.

Arthur Fletcher is known as “the father of affirmative action.” Though he died in 2005, his work lives on – and should have been recognized.

Bill Coleman became the first black Republican in a presidential Cabinet when he served as transportation secretary under President Gerald Ford, a Republican, from 1975 to 1977. He died in 2017.

In 1966, Edward Brooke, a Republican who was attorney general of Massachusetts, became the first black to be elected to the U.S. Senate by popular vote. He died in 2015.

Then you have Kay Cole James, the iconic civil rights warrior from Portsmouth, Virginia. As president of the most prestigious conservative think tank in the country, The Heritage Foundation, she is the first black and the only woman to lead a major conservative organization.

As a child, James also was one of the black students who integrated Virginia’s public school system despite severe opposition from some white conservatives.

Am I the only one who noticed this intentional rewriting and ignoring of our history?

The LBJ Library and Democrats as a whole should be ashamed of themselves for misrepresenting the bipartisan history of the civil rights movement. This should have been one event that was truly reflective of the real history of America — the good and the bad.

To my conservative friends: This is why we need a “conservative” version of Black History Month; but it needs to be year-round.

Slavery and racism are still the biggest blemishes on American history; but because we are Americans and showed resolve, we also have one helluva story of redemption to tell.

We have come a long way from the days of slavery and Jim Crow. We have blacks making millions of dollars in sports, music, business, science, and education. Blacks have been to the moon and back. We had a black president, and now a black vice president.

In the very moment when we should have been celebrating the journey America has taken, we have been forced to reflect upon the willful deceit propagated upon the true history of our nation by both liberals and conservatives.

We, as conservatives, must stop complaining about liberals and how they portray us. If conservatives truly believe in our message, when are we going to create our own video, verbal, and written content in partnership with “credible” black conservatives and take our message 24/7 to the marketplace of ideas within the black community?

If you believe in conservatism, I would love to hear from donors, journalists, educators, elected officials, and entrepreneurs. Let’s discuss my vision and tangible ways we can move forward.

As I am wont to say: “When all is said and done, there is more said than done.”

In America, the System Bends Towards Justice