Billboards Near CDC Campus Ask: ‘How Many More Kids Have to Die’? 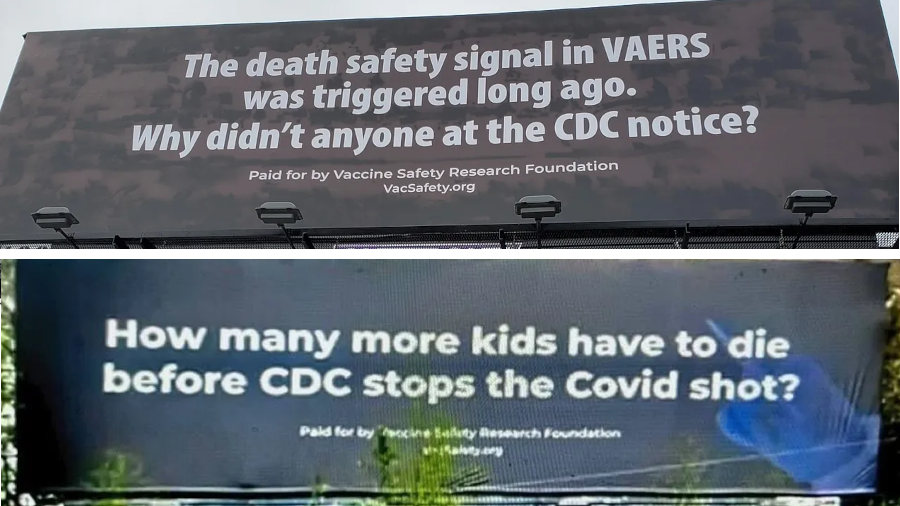 Billboards Near CDC Campus Ask: ‘How Many More Kids Have to Die Before CDC Stops the COVID Shot?’ & ‘The Death Safety Signal in VAERS was Triggered Long Ago. Why Didn’t Anyone at the CDC Notice?’

ATLANTA — The Vaccine Safety Research Foundation (VSRF) announced the purchase and strategic placement of two new billboard advertisements right outside the campus of the Centers for Disease Control and Prevention (CDC).

One billboard asks, “How many more kids have to die before the CDC stops the Covid shot?” and is located at the intersection of Clairmont and Emory. VSRF recently released a compelling video titled, Are the Kids OK? citing data that approximately 4,650 children in the U.S. have died following COVID-19 vaccination. This death calculation is derived from the 150 child deaths following COVID shots that have been reported as of Sept. 23, 2022, on the CDC’s own vaccine injury tracking system, the Vaccine Adverse Event Reporting System (VAERS), multiplied by the VAERS underreporting factor of 31 established in a peer-reviewed study by scientist Jessica Rose, Ph.D.

A second billboard, stating, “The Death Safety Signal in VAERS was triggered long ago. Why didn’t anyone at the CDC notice?” is positioned at the intersection of Briarcliff Road and Johnson Road. VSRF Founder, Steve Kirsch, has clearly demonstrated how the VAERS death safety signal has been triggered in this Substack article.

Both billboards are slated to run for one month. The VSRF spent $10,600 to rent the billboards and is considering running them for a more extended period of time and placing additional billboards throughout the country. They are accepting donations to support this effort at VacSafety.org.

The sudden death of healthy young athletes, and more broadly of working-age people from 18-64, is on the rise in the United States and across the globe.

Just last week, two world-renowned cardiologists, Dr. Peter McCullough and Dr. Aseem Malhotra, sounded the alarm in this VSRF video about the threat that the COVID shots pose for young people around the world.

The California-based VSRF was founded by Steve Kirsch, a Silicon Valley entrepreneur and philanthropist who has been profiled in Forbes and was featured on 60 Minutes when his COVID-19 Early Treatment Fund discovered a successful early treatment medicine for COVID. Mr. Kirsch is an M.I.T. graduate and a cancer survivor who has funded medical research for over a decade, including extensive support for the Glaucoma Research Foundation.

Vaxattack: Why Did Hundreds of Highly Trained Athletes Die Unexpectedly This Year?

When 2 Year Olds Are Thrown Off Airplanes, You Know America Has Changed