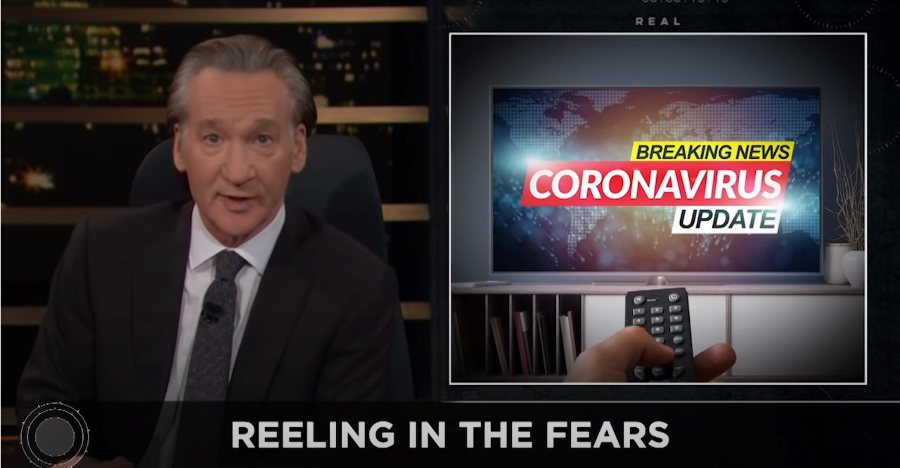 Is liberal comedian and HBO host Bill Maher a closet libertarian? It may seem unlikely, but at the very least, Maher made the case against COVID-19 alarmism well in an epic Friday monologue. He called out the deceptive rhetoric employed by media outlets and public health officials alike who, to get the masses to do what they think best, have exaggerated and distorted the facts of this pandemic.

A “Scared Straight” Approach to the COVID Pandemic

“Don’t spin me when it comes to my health,” Maher said. “Over the past year, the COVID pandemic has prompted the medical establishment, the media, and the government to take a scared straight approach to getting the public to comply with their recommendations.”

As if he’s been following the reporting of FEE’s own Jon Miltimore, the comedian cited research from Dartmouth researchers that surveyed U.S. media coverage and concluded it was disproportionately negative, even relative to the inherently negative nature of pandemic coverage. Researchers found that a whopping 91 percent of stories in U.S. media outlets were negative, compared to 54 percent of non-American outlets and 65 percent of academic scientific articles.

“The negativity of the U.S. major media is notable even in areas with positive scientific developments including school re-openings and vaccine trials,” the study concludes. “Stories of increasing COVID-19 cases outnumber stories of decreasing cases by a factor of 5.5 even during periods when new cases are declining.”

Better safe than sorry, right? Well, no, and Maher perfectly explained why.

Give It to Me Straight, Doc

“When all of our sources for medical information have an agenda to spin us, yeah, you wind up with a badly misinformed population, including on the left,” the comedian lamented. “In a recent Gallup survey, Democrats did much worse than Republicans in getting the right answer to the fundamental question: what are the chances that someone who gets COVID will need to be hospitalized? Almost 70% of Democrats are wildly off on this key question and also have a greatly exaggerated view of the danger of COVID too and the mortality rate among children. All of which explains why today, the states with the highest share of schools that are still closed are all blue states.”

Indeed, Americans overall vastly overestimate the risk of hospitalization from COVID-19. And even though most young Americans face a statistically negligible risk of death from the coronavirus, which is more deadly for the elderly, 18 to 24-year-olds are the subgroup most afraid to resume normal social life.

Maher highlighted the actual hospitalization risk of the coronavirus, which is indeed serious, but not as grave a threat as much of the coverage suggests. He decried the atmosphere wherein anyone who points out these realities is accused of downplaying the crisis or conspiratorial denialism.

“Those are just facts,” the comedian concluded. “I know it’s irresponsible of me to say them.”

If You Lie to People, You Lose Their Trust

Maher’s sarcasm is well-warranted, because alarmism isn’t just being extra careful. It’s harmful in its own right.

Complex matters of public policy require trade-offs. People need sound and reliable data so they can make informed decisions. What safety steps should I take? What economic opportunities should I forgo? What level of risk am I comfortable with?

People can’t make the right call on these complex questions when their perception of risk is being distorted by bad models and media sensationalism. Alarmism ultimately leaves people worse off than if presented with the full, honest picture.

As Maher put it, “If you lie to people, even for a very good cause, you lose their trust.” And once you lose people’s trust, you can’t do anything to help them.

You can click here to watch Maher’s full monologue.